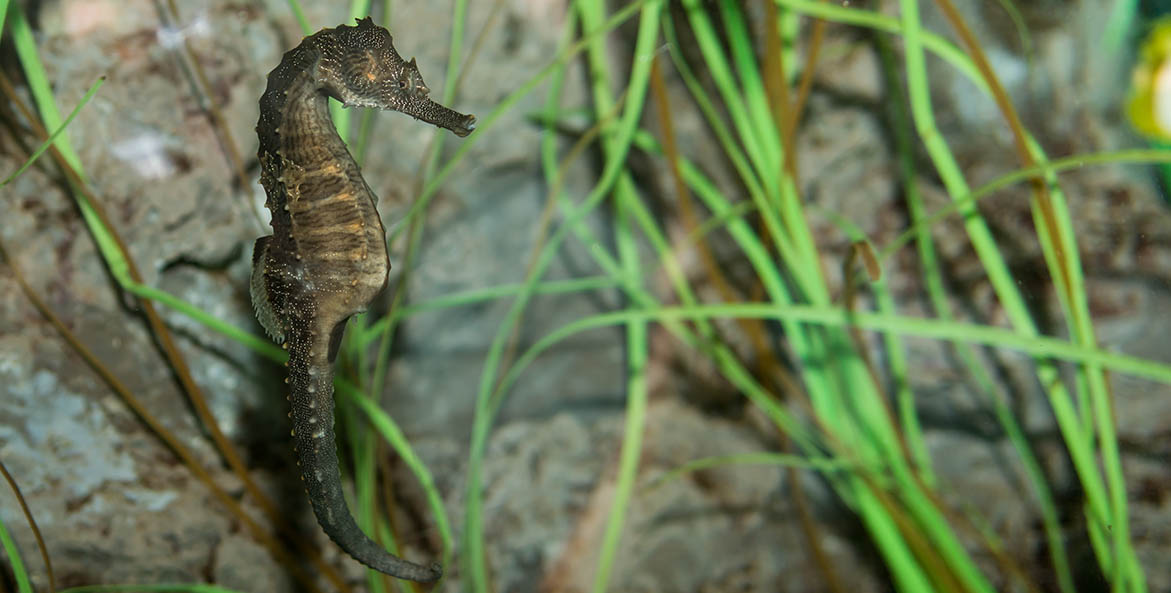 Lined seahorses rely on the Bay's underwater grass beds for food, shelter, and a place to breed

On Earth Day 2020, Amy Flora was tending to the CBF oyster garden off her dock on Norfolk's Lafayette River when she came across one of the Chesapeake's miniature marvels. A lined seahorse was clinging to the cage that holds the tiny oyster reef she raises for CBF restoration work.

The uncommon visitor became a teaching tool for her neighbor's three children, who were learning at home during the pandemic. Fascinated by the unusual fish, they briefly observed the seahorse in a tank before safely returning it to Flora's oyster garden.

"Seahorses have to be the cutest little things I've ever seen," Flora said. "They are mystical and magical like a little sea dragon."

The lined seahorse, the only species native to the Bay, is truly one of a kind. They are masters of camouflage, changing colors to blend in. Some even grow grass-like protrusions from their skin and fins. Seahorses are weak swimmers, so rather than battle the current they often use their prehensile tails to hold on to structure like underwater grasses. They navigate by flapping two pectoral fins on the side of their heads that look like undulating ears. And in an amazing twist, male seahorses give birth to hundreds of babies after females lay eggs in the male's protective pouch.

While relatively rare in the Chesapeake, seahorses are found every year in the lower Bay in trawl surveys conducted by the Virginia Institute of Marine Science (VIMS). In the Bay they are most common in the saltier waters around Hampton Roads and Virginia's lower Eastern Shore, but they do occasionally range farther up. Watermen sometimes discover them in underwater grass beds in Tangier Sound, and they have been documented off Southern Maryland and Maryland's Eastern Shore.

Seahorses prefer to hide among structure where they can avoid predators and wait for currents to wash food along, mostly zooplankton and tiny crustaceans, which they vacuum up their tubular snouts. "Their strategy is 'don't see me' and then pick at little items that come by their nose," said Troy Tuckey, VIMS Senior Research Scientist.

The Bay's meadows of underwater grasses create a nursery and feeding ground for a host of life seeking food and shelter from predators, from seahorses to shrimp to softshell crabs. The pipefish—a close cousin of the seahorse with a long, thin body—are much more common in the Chesapeake Bay and also found frequently in underwater grass beds.

Oyster reefs also create important habitat, hosting sponges, algae, and other structure for seahorses to hold on to. Flora is not the first CBF volunteer to discover a seahorse in the miniature reefs of an oyster garden. "There is a little ecosystem going on in there," Flora said. "I think they probably feel safe hiding in between the oyster shells. There is lots of life: plankton, shrimp, fish, crabs."

You can see lined seahorses up close at educational facilities around the Bay, including the Calvert Marine Museum, Virginia Living Museum, and National Aquarium in Baltimore.

"They are just fascinating to people," Jay Bradley, Curator of Blue Wonders at the National Aquarium. "There's something that's very endearing about them. It's one of those intangible things."

But seahorse lovers should remember that this charismatic little creature is dealing with a dramatic loss of habitat in the Bay. The Chesapeake may once have had 600,000 acres of underwater grasses, while coverage in recent years has generally been below 100,000 acres according to VIMS surveys.

Bradley emphasized the importance of conserving and restoring habitat for underwater life in our region. "I would hazard to say that as the seagrasses go, so do the seahorses," Bradley said.