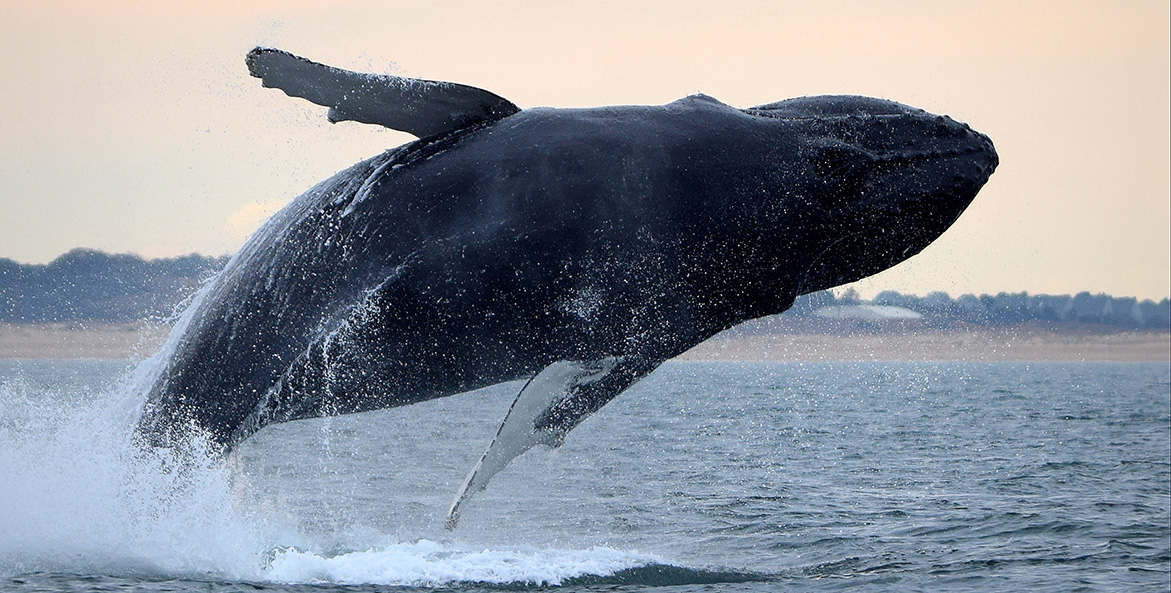 A humpback whale (Megaptera novaeangliae) breaching near the mouth of the Chesapeake Bay.

Known for their acrobatics, humpback whales sometimes venture into the Chesapeake to feed

Fishing one morning on a personal watercraft off Cape Henry at the Bay's mouth, Brian Lockwood got a shock after hooking a big striped bass while casting into a school of menhaden.

"I'm fighting this fish, and literally 10 feet away a whale comes up with its mouth wide open, scooping up bait," Lockwood said. "Then boom, there's another one right beside me. I was like 'Wow, could there be anything cooler than this?'"

For Lockwood, who fishes and shoots photos more than 120 days a year, the close encounter with two humpback whales stands out as a high point. In the winter he frequently sees whales around the mouth of the Chesapeake. Sometimes he just spots a plume of mist after a whale gently surfaces to breathe. Occasionally a whale will rocket its body completely into the air.

"They are majestic," Lockwood said. "It's like a five-story building shooting up out of the water and slamming down. Just the noise when one breaches and hits the water is deafening."

While they are mostly seen around the Bay's mouth, whales sometimes venture much farther up. Lockwood has seen them feeding on schools of baitfish around Reedville and Smith Island. In March 1992, whales made headlines when they showed up close to Annapolis at Thomas Point Light and Poplar Island.

There are many more whale sightings in Virginia waters now than in the 1980s, when Mark Swingle began researching marine mammals for the Virginia Aquarium and Marine Science Center.

The trend is part of a general rebound of the humpback population since an international whaling moratorium went in place since the 1980s. "We've come a long way. From those early days documenting a few whales we now actually have commercial whale watching in the wintertime," said Swingle, who is Chief of Research and Conservation for the Aquarium.

Adult humpback whales migrate in the winter from northern waters to breeding grounds in the Caribbean. But in Virginia, nearly all whales sighted are juveniles too young to breed. Instead, they hang out in nearshore waters from late November to early March. "Juvenile whales tend to go where the food is. Humpbacks feed on small fish, and we have plenty of fish here in the winter," said Kristin Rayfield, a naturalist with Rudee Tours, a Virginia Beach business offering whale watching.

Whales often enter the Bay to feed on schools of menhaden—the silvery, oily fish that's a favorite meal for everything from striped bass to osprey. "Menhaden are an easy target, as they naturally ball up," said Alexis Rabon, a Rudee Tours naturalist. In what is called lunge feeding, whales rush towards the surface with mouths open wide under schools of fish.

Unfortunately, injured or dead whales occasionally wash up on Virginia beaches. The Virginia Aquarium's stranding response program responds to these incidents. For research purposes they perform necropsies (animal autopsies) on whales that have died. Swingle recalls sometimes finding "barrels and barrels" of menhaden in whale stomachs.

The link between whales and menhaden in the Chesapeake underscores the importance of managing the Bay's vast menhaden fishery so that there are enough to fulfill their role in the food chain.

"Sustainably managing the menhaden fishery is key to making sure we can keep seeing whales and other marine life here," said Rabon.

In addition to humpbacks, there are occasional Virginia sightings of fin whales, minke whales, and right whales. Both Rudee Tours and the Virginia Aquarium offer regular whale watching trips throughout the winter out of Virginia Beach lasting about two hours each.

People often travel from far away to marvel at winter whales around the mouth of the Chesapeake. That fascination is natural, Swingle said. "They are the pure definition of charismatic megafauna, the largest animals that have ever lived."

If you see a whale in the Chesapeake Bay, especially if it appears injured or deceased, report it to the Virginia Aquarium's Stranding Response Program by calling 757-385-7575. Marine mammals must be viewed from a respectful distance. NOAA asks boaters to remain at least 100 yards away from most whales, and 500 yards from Atlantic right whales.

Humpback whales and other predator species depend on a healthy food chain.