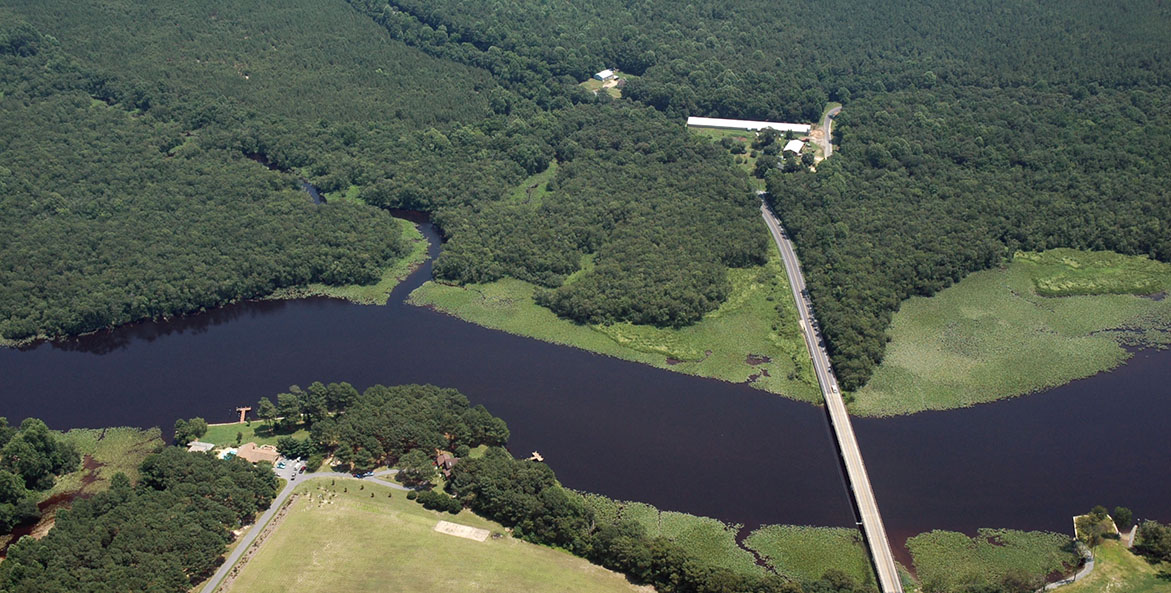 Dark coffee-colored water in Marshyhope Creek, a tributary of the Nanticoke River, after excessive summer rain.

The following was first published in The Talbot Spy.

The small yet critically important Marshyhope Creek on Maryland's Eastern Shore has been targeted for a massive facility that poses a serious threat to its water quality and its habitats. The state's initial attempt to permit AquaCon's massive Federalsburg facility is grossly deficient.

The start-up Norwegian company's promises about sustainable indoor salmon farming and the economic benefits it would bring to Maryland have not panned out elsewhere in this industry.

Instead, the nascent indoor salmon farming industry has been plagued by mass die-offs of fish, lackluster consumer support, and in one case a catastrophic fire that destroyed an industrial salmon production facility in Demark.

Despite the industry's problems, AquaCon is now proposing a 25-acre indoor salmon farm near Federalsburg, and a draft discharge permit for it has been issued by the Maryland Department of the Environment (MDE). As scientists and environmental advocates who have reviewed the proposed permit, we find it to be concerning and deficient. If AquaCon is allowed to operate under this permit, there are numerous risks to Eastern Shore ecosystems and the Chesapeake Bay.

Anyone concerned with this proposal should attend the in-person public hearing 5 to 8 p.m., August 10 at Federalsburg Town Hall. MDE plans to accept written comments until close of business October 17.

AquaCon is proposing to produce about 35 million pounds of salmon per year at this facility in a series of tanks. Within these tanks, the water would be filtered and recycled to limit the wastewater that leaves the plant.

Yet AquaCon still proposes to dump 2.3 million gallons of wastewater into Marshyhope Creek each day. This amount of polluted water could overwhelm the narrow and mostly shallow tidal creek.

Federally and state designated as critical habitat, the Marshyhope is the smallest known river in the United States that's home to the endangered Atlantic sturgeon. It's also the only river in Maryland where the species is known to spawn. MDE has not addressed concerns expressed by Maryland's Department of Natural Resources and scientists from the University of Maryland Center for Environmental Science about how the pollution and coldwater discharges from the industrial salmon farm would affect Atlantic sturgeon.

This project represents the first experiment of its kind where fecal wastes, well exceeding those of the entire human population of Caroline County, are self-contained under a single roof.

Neither AquaCon nor MDE has provided assurances that the proposed technology, which has only been tested in small production units, will work to filter the feces from millions of large salmon grown in tanks. Maryland's Eastern Shore already faces a severe overabundance of animal processing wastes.

In the U.S., there's only one industrial salmon farm in operation that's of a similar scale as what's being proposed by AquaCon—a plant in Miami operated by Atlantic Sapphire. That plant, which first began producing salmon in 2020, suffered mass die-offs of salmon in 2020 and 2021 that killed more than 600,000 fish—equivalent to about 1,300 cattle being wasted. In September 2021, Atlantic Sapphire's pilot plant in Demark, where it was testing technology to raise salmon indoors caught fire and destroyed the facility. The fire created a cloud of smoke that covered neighboring communities and caused a nearby waterway to turn red. Authorities warned citizens in the area not to enter the water due to excessive amounts of iron chloride spilling into the water next to the plant.

Despite these catastrophic events, MDE's proposed permit does not address what AquaCon would be required to do in the event of loss of power, water supply interruptions, fish die-offs, debilitating storms, or devastating fire. Even if AquaCon were required to obtain a bond to cover operational failures, the environmental risks are too high to be mitigated by this kind of compensation.

The Marshyhope is already impaired by primary Bay pollutants such as nitrogen and phosphorus, yet MDE's permit doesn't detail how the plant could ensure it doesn't exceed the limits the agency sets for these pollutants.

The permit doesn't address how stormwater runoff would be treated from the plant, which would be one of the largest buildings in the state—about the size of six Super Walmarts. An inch of rainfall on this facility could produce up to 750,000 gallons of runoff, which would create flooding and pollution risks.

AquaCon is also proposing to withdraw 2.3 million gallons of water per day from underground aquifers, yet MDE has failed to address whether groundwater supplies and existing uses can accommodate this level of withdrawal, or could cause nearby land to sink, as has happened elsewhere.

What MDE did do is compare this new permit with one issued in Belfast, Maine for a different indoor salmon farm. However, the comparison is less than apt. In Maine, the facility would drain into Penobscot Bay, a much larger, deeper, and colder body of water, whereas the Marshyhope at the proposed discharge location is only about 100 feet wide and wadable at low tide. And while Maine did grant a discharge permit for the facility, the plant has not been built so there's no way to tell if the permit is appropriate or being met.

The indoor-raised salmon industry has struggled with an off-taste due to high levels of the compound geosmin being present in the salmon tanks. In Maryland, AquaCon is proposing to "purge" that geosmin from their fish straight into the Marshyhope. The effects of doing that to the fish already living in this sensitive waterway—from temperature and salinity imbalances, to chemical contamination, to excessive nutrient loads—are mostly unknown.

Taken together, the risks posed by this speculative business proposition are great. If Maryland is really interested in enabling farm raised salmon production on the Shore, state regulators need to do more to protect surrounding communities, guarantee pollution in local waterways won't get worse, and find a site that doesn't directly threaten the endangered Atlantic sturgeon.