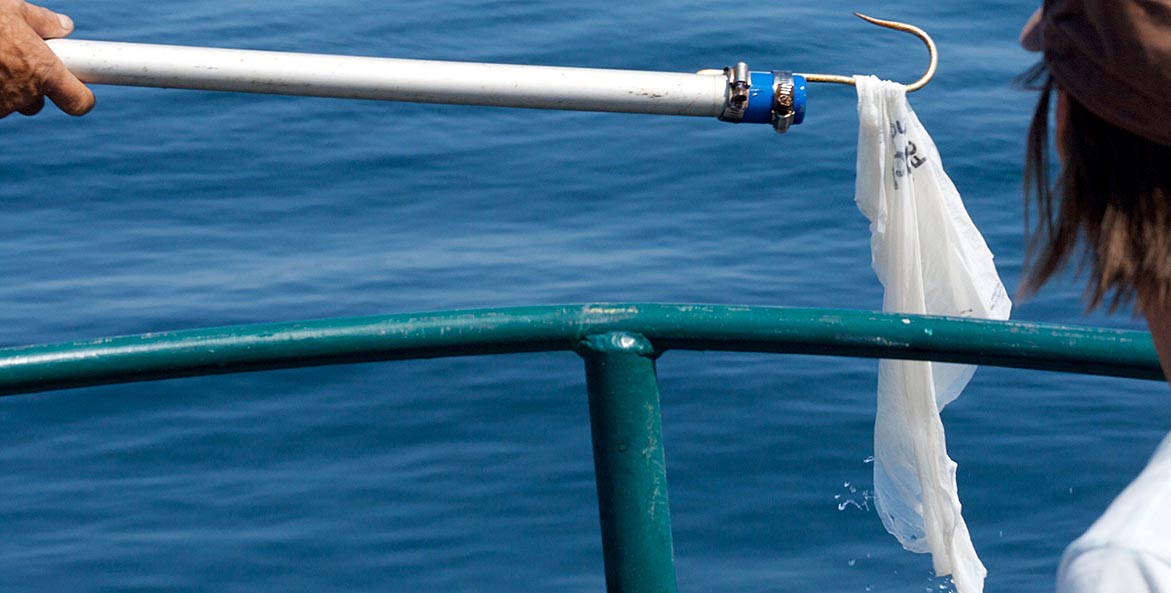 "Pollution (plastic bag)" by garrettc is licensed with CC BY-NC 2.0. To view a copy of this license, visit https://creativecommons.org/licenses/by-nc/2.0/

Plastic bags continue to choke our waterways and health. But there’s a solution!

Plastic bags are one of the most common forms of litter worldwide, and yet an astounding five trillion plastic bags are used each year. They are a blight on our landscape, almost always made from some form of fossil fuel, and an ongoing tragedy for our waterways and the Chesapeake Bay, where they choke the life from fish and marine mammals. And the damage doesn’t stop there: Like other single-use plastics, bags break down into harmful microplastics that threaten wildlife up and down the food chain, including humans, who on average, consume nearly five grams of plastic per week, which is equivalent to the weight of a credit card.

Alarmingly, a 2019 survey found microplastics in every water sample taken in the Chesapeake Bay Watershed. Beyond the detrimental impacts to animal and human health, these plastics have a costly impact. In many urban and suburban areas, plastic bags and other litter can clog storm drains, resulting in increased flooding and costly cleanup or repairs to stormwater infrastructure. Tax payers also pay a high price for litter cleanups along roadways; in Virginia, the Department of Transportation spends an estimated $3.5 million on these programs annually.

Some of the most significant industries that drive the economy throughout the Bay watershed—agriculture, fisheries, and tourism—are also negatively impacted by plastic pollution. NOAA found that coastal Delaware and Maryland could lose millions of visitors and hundreds of millions in tourism spending if marine debris is left unchecked. And while the seafood industry in Maryland and Virginia generates nearly $3.4 billion in sales annually and provides roughly 34,000 jobs, livelihoods are threatened by polluted waterways and declining populations of fish species and crabs. What’s more, on farms, plastic bags in fields can easily be swept up by bailing machinery, causing cotton farmers to lose out on profits and spend thousands on repairing essential equipment.

The problem seems insurmountable and simple all at the same time—just do away with single-use plastic bags. But it is not that simple.

Benefits of a Plastic Bag Fee

Banning single-use plastic bags is often ineffective at reducing plastics because many guidelines still allow for paper and reusable bags to be offered. Unfortunately, a plastic bag is often defined as reusable if it is 2.25 millimeters thick, so retailers can provide thicker plastic bags to avoid removing them from their stores. Charging a fee for plastic bags encourages behavior change, and has proven effective at reducing the number of bags used in cities like Washington, D.C., which has had a fee in place since 2010 and has seen a 75 percent reduction in the number of plastic bags found in trash traps along the Anacostia River.

In 2020, the Virginia General Assembly authorized localities to adopt an ordinance to charge a fee of five cents per plastic bag and directed revenue to be spent on cleaning up existing litter, mitigating pollution, and educating the public. Where financial burdens are a concern, some communities have elected to use fees collected to provide reusable bags to residents challenged by the ban. Others have exempted residents who qualify for assistance programs from charges. One of the most challenging hurdles for localities to overcome is the current state of the economy. Increased expenses resulting from inflation are weighing on many Americans, and localities are hesitant to enact an additional fee at this time. It’s a nuanced situation to navigate, but it’s important to remember that shoppers can opt out of paying any additional fees by bringing reusable bags along to the store or declining to use a plastic bag when it’s unnecessary.

Plastic bags aren’t just a nuisance, they’re a health hazard. The Chesapeake Bay watershed is home to more than 18 million people and 3,600 species of plants and animals, all of which are threatened by continued plastic bag use. Elected officials from local to federal levels should work to remove them from the market and usher in more sustainable products and practices in a way that takes into account the needs of all.