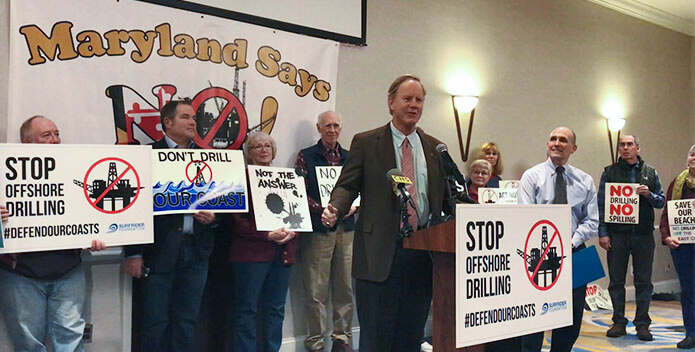 CBF President Will Baker addresses a crowd during a protest of offshore drilling.

Not Worth the Risk to Our National Treasure

From Baltimore to the Potomac to Norfolk, CBF has taken an uncompromising stand against any expansion of the oil and gas industry in the Bay watershed for four decades. In particular, the dangers posed by offshore drilling are unacceptable.

When it comes to offshore oil drilling, spills happen. On average, spills from platforms, pipelines, tankers, and coastal facilities release 157,000 barrels of oil every year. This poses an unjustifiable risk to the Bay, our coasts, and the economy.

Placing Wildlife and Our Economy at Risk

The ocean waters off the mouth of the Chesapeake are a critical part of our greater Bay system. Our treasured blue crab illustrates the connectivity between the Bay and the ocean—virtually all of the Bay's blue crab population lives in coastal waters during their early life cycle. Newly spawned crab larvae can float miles out into the ocean in the top centimeter of the water column, making them exceptionally vulnerable to even the smallest oil spill.

Of the utmost concern is a major oil spill off the mouth of the Bay. The devastating impact of a major spill would harm more than just the Bay's blue crab population. Consequences could include:

While all the Bay's great tributaries are an integral part of the Chesapeake system, so too are the offshore ocean waters, which account for more inflow to the Bay than all its rivers combined.

Normal offshore drilling operations also release toxic pollution into the air and water. Exploration and drilling at the platform, transportation via tankers, and refining on land all can release volatile organic compounds, greenhouse gases, and other air pollutants.

The United States military is a major employer and economic engine for both Maryland and Virginia. Oil production off the Atlantic coast has raised concerns from the Department of Defense because of potential conflicts with military operations.

Offshore drilling increases our reliance on fossil fuels at a time when we should be turning instead towards renewable energy alternatives, energy efficiencies, and conservation. Climate change, driven in part by perpetuating our dependence on oil and gas, is a pressing problem for the Chesapeake Bay and all those who live in the region.

The Bay is on a path toward recovery as a result of the Chesapeake Clean Water Blueprint. Now is not the time to gamble our renewable aquatic resources for a single non-renewable petroleum source.

It's far more prudent to meet our energy needs by pursuing energy efficiency and conservation now, and developing wind, solar, and other renewable sources for the future.