Virginia’s Clean the Bay Day Cancelled, but Spirit Lives On 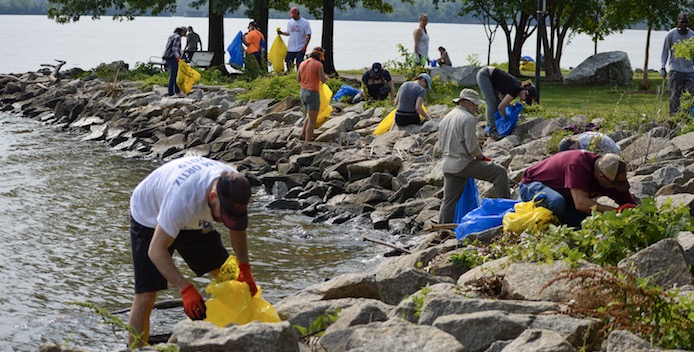 Volunteers clean up the Potomac River at Oronoco Bay Park in Alexandria, Virginia for the 31st annual Clean the Bay Day.

Virginia’s Clean the Bay Day tradition has taken place on the first Saturday in June every year since 1989, but for the first time this year it will be cancelled due to COVID-19. The annual litter cleanup organized by the Chesapeake Bay Foundation (CBF) and local partners is one of the largest volunteer events in Virginia.

In previous years, thousands of volunteers participated at hundreds of sites from Hampton Roads to the Richmond area to Northern Virginia, often cleaning up well over 100,000 pounds of litter and debris from shorelines, rivers, parks, and streams.

“We’re all reeling from the many changes this year has brought, but the spirit of Clean the Bay Day is alive,” said CBF Hampton Roads Grassroots Manager Tanner Council. “Many dedicated Virginians are still doing their part to clean up the environment.”

Cleaning up litter is a great way to celebrate Chesapeake Bay Awareness Week, which starts on June 7.

“Wherever there is litter, there is a chance to help,” Council said. “This Chesapeake Bay Awareness Week, look for ways to safely remove litter from your neighborhood streets, parks, or nearby waterways.”

Rains wash litter from streets, parks, and shorelines into nearby waterways, where they pollute the water and threaten wildlife. While Clean the Bay Day is cancelled this year, CBF is already planning for the next event, scheduled for June 5, 2021.

Those who want to take steps towards a saved Bay this month can also join CBF’s Walk the Watershed, a virtual event in which teams commit to walking a total of 200 miles between now and the end of June. While walking they can perform restoration activities like picking up litter, as well as raise funds for Bay restoration.