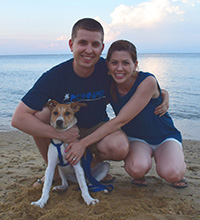 Drew Robinson with his wife, Heather, and dog, Sparky, at the mouth of the Magothy River in Annapolis, MD.

Drew is no longer at CBF.