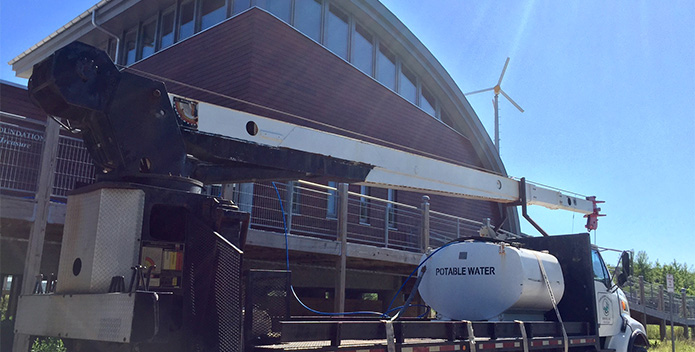 Using rainwater is a first for the brewery, which is one of just a handful in the country to turn rainwater into beer. "Brewing is so water-intense," said Drew Stephenson, co-owner of Pleasure House Brewing. "That's why we do whatever we can to recycle and conserve water." With the Brock Center little more than a mile away, working with CBF was a natural fit. "When we founded the brewery our main mission was to tie it into our community," Stephenson said.

CBF's Brock Center is the first building in the continental United States permitted to treat rainwater to drinking water standards. Rain falling on the roof is funneled into two large cisterns, where it passes through a filtration system and supplies all the building's water needs. The 300 gallons used to brew the first batch of Rain Barrel is the amount captured in an average summer thunderstorm. Environmental engineers at MSA, P.C., have been key to certifying that the rainwater has been safe to drink. "Thanks to their hard work we can drink the water here daily, and now make beer from it," said CBF Brock Center Manager Chris Gorri.

In early August, Cape Henry Launch Services, which delivers drinking water to ships, trucked hundreds of gallons of treated Brock Center rainwater across the Lynnhaven River to Pleasure House Brewing. The large tank was then raised up on a crane, where the water was gravity fed into brewing vessels. Gorri and Brock Center Coordinator Erica Park added hops to the first batch of beer.

Looking forward to trying the final product? Click here to register for Save the Bay Family Day on September 10. Rain Barrel will be on tap at this celebration of CBF's 50th Anniversary, which will also include boat trips, live music, environmental education, and more. Hope to see you there!