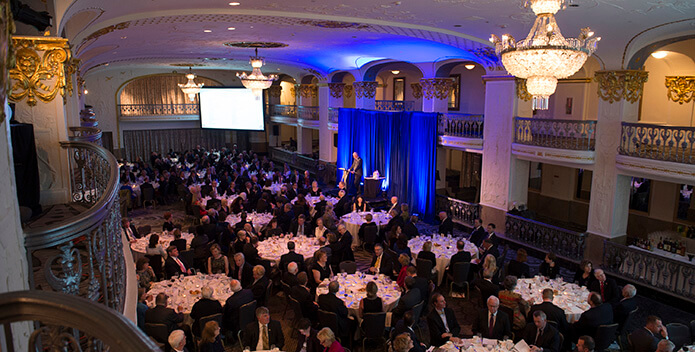 William C. Baker, President of the Chesapeake Bay Foundation, will be honored by the U.S. maritime community with the National Maritime Historical Society's Distinguished Service Award at the 8th annual National Maritime Awards Dinner on April 25, 2018, at the historic Mayflower Hotel in Washington, D.C.

The National Maritime Awards Dinner annually brings together the entire American maritime community to celebrate the sea and those who live and work on it. Attendees include oceanographers, conservationists, environmentalists, the sea services, merchant marines, the cruise industry, maritime museums, historic ships, educators, maritime authors and artists, boat designers and builders, and sea explorers. The dinner is co-sponsored by the National Maritime Historical Society, now in its 54th year, and the National Coast Guard Museum Association.

Master of Ceremonies is Annapolis' own Gary Jobson, competitive sailor, television commentator, author, President of the National Sailing Hall of Fame, Past President of US Sailing, and Vice President of the International Sailing Federation. He will be supported by a service academy chorale, the Combined Sea Services Color Guard, and distinguished award presenters including the Hon. Tom Ridge, the first Secretary of Homeland Security and former Pennsylvania Governor.

Tickets for the traditionally sold-out event are $275 per person or $3,000 per table. For reservations or for information on sponsorship opportunities, contact Burchenal Green, President, National Maritime Historical Society, at burchenalgreen@seahistory.org or 914-737-7878 x223.