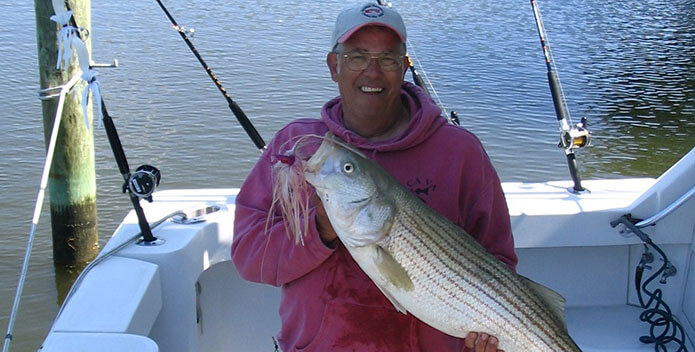 John Bello feels strongly about improving water quality and oyster reef habitat, which is why he signed on early to CBF’s Anglers for Clean Water project.

Like many of us "of a certain age," John Bello cut his angling teeth as a boy, with his father and an uncle bottom-fishing bait on oyster reefs for white perch, spot, croakers, and gray trout. His territory was the lower Potomac out of Tall Timbers Marina, near Piney Point in Southern Maryland. "My Italian grandmother created some amazing family fish fries," he recalled over a recent lunch of fried oysters. "We also trolled Boxing Gloves [spoon-shaped bucktails that were popular—and effective—in the ‘60s and ‘70s] tipped with pork rind in places like the Mud Leads. Now Boxing Gloves are out of fashion [though they still catch fish], Uncle Josh has quit producing pork rind, the trout and croakers have gone, and most of the spot are small. I'm mad."

"I want to keep fishing, but I also want my grandchildren to enjoy the Bay the way I did growing up," said John Bello.

Truth to tell, John got worried twenty years ago and did something about it. He was a big part of the team that founded the still-very-active Northern Virginia Chapter of the Coastal Conservation Association/VA and served as its first Chairman. Among other things, he helped organize a boat parade (some thirty skiffs on trailers) to demonstrate angler support for clean water legislation at the 2003 annual meeting of the Chesapeake Executive Council at George Mason University in Fairfax. That meeting led to landmark commitments by Maryland and Virginia for advanced sewage treatment plant upgrades that deserve serious credit for the Bay's recent health improvements.

More recently, John has taken on the chairmanship of the new Virginia Saltwater Sportfishing Association, which seeks to "Unite Virginia saltwater anglers, both recreational and charter, for all fisheries management issues." In particular, he has led VSSA's drive for conservation of menhaden, including a strong response now to Virginia's appeal of Amendment 3 of the fishes' management plan enacted in November by the Atlantic States Marine Fisheries Commission. Whenever he can, he fishes and crews with a friend along the Bay's channel edges between the mouth of the Patuxent and Point Lookout.

John Bello feels strongly about improving water quality and oyster reef habitat, which is why he signed on early to CBF's Anglers for Clean Water project. "What are crabs and rockfish feeding on?  I see algae blooms, more highways and parking lots, dead zones. We've compromised the Chesapeake ecosystem. I want to keep fishing, but I also want my grandchildren to enjoy the Bay the way I did growing up. Yeah, I want ‘em to help me keep those family fish fries going."