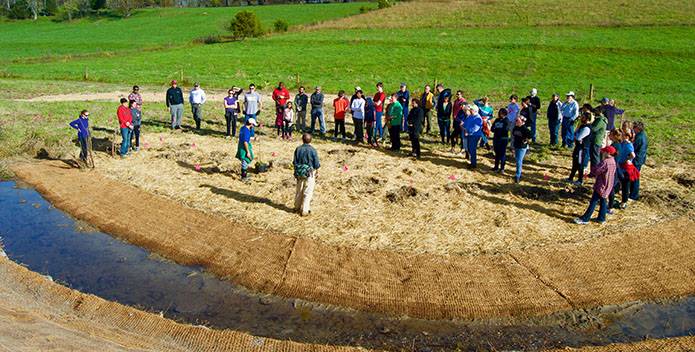 Steve and Ruth Ann Derrenbacher are the third generation to own and operate their 140-acre family farm in Woodsboro, Maryland. The hard-working couple raise grass-fed Angus beef and have been doing so for 20 years. Recently, they purchased a flock of Katahdin Hair Sheep and plan to experiment with the idea of a "flerd". By combining their cow herd with their new flock of sheep, several benefits transpire. The Derrenbachers' livestock operation becomes more diversified, they make better use of their pastures, and a mutualistic relationship has the potential to form between the cows and sheep. The animals help to control each others' parasites, and the cows can even help to reduce the amount of predation on the sheep. 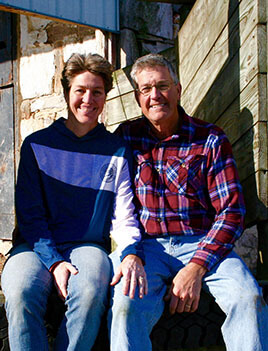 Steve and Ruth Ann Derrenbacher are the 3rd generation to own and operate their 140-acre family farm in Woodsboro, Maryland.

All of the livestock are grass-fed and undergo intensive rotational grazing where they are moved to a new pasture at least once a day. "When you understand animal physiology, you understand that they were designed to eat grass and grass only" says Steve Derrenbacher, a veterinarian of 32 years. Steve explains that his veterinarian services aren't needed nearly as much when the cattle are grazing on grass. A grass-fed diet is much better for the animals' health. In addition, the cows have been excluded from the creek area for 15 years. This practice immensely improves the water quality of the stream by reducing erosion from heavy animals trampling on stream banks. Also, it improves the health of the herd by preventing them from drinking water that has been contaminated by manure in the stream. In fact, fencing cattle out of streams greatly improves the farm's economics by not only reducing veterinary bills but also by allowing cattle to reach market weight faster, improving the bottom line.

Ruth Ann's Garden Style Beef is available for purchase directly from the farm. Mostly spread by word of mouth, the Derrenbachers market to local customers. Not only do they sell different cuts of beef, but they also market their grass-fed animals such as feeder calves and finished steers. It is much more beneficial to buy directly from farmers like Steve and Ruth Ann than to buy from a grocery store. Economically speaking, if you spend one dollar at a grocery store, only about 15 cents of that dollar is returned to a farmer, with a majority going to transporting food to stores and stores taking their cut of that dollar. However, when you buy directly from the farmer, the farmer gets a greater share of the dollar so that they can make a living. Buying straight from the farm also helps the community. When you purchase straight from the farm, that one dollar is multiplied two or three times. In contrast, when you purchase from a big box store, only 30 cents of the dollar stays in the community. 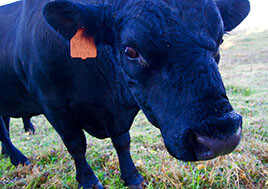 The Derrenbachers have done their best to combat erosion on their farm by conducting a stream restoration project, planting trees, and moving the cattle fencing fifty feet from the stream banks to create a wider stream buffer.

The Derrenbachers' farm used to produce row crops, but now they solely raise livestock. Steve recognizes that his farmland is highly erodible and plowing the soil would only make matters worse. He says, "Some people try to put a round peg in a square hole; if the land is not suited for it, don't do it". The Derrenbachers have done their best to combat erosion on their farm by conducting a stream restoration project, planting trees, and moving the cattle fencing fifty feet from the stream banks to create a wider stream buffer. They also have worked with the Chesapeake Bay Foundation's restoration scientist, Rob Schnabel, to plant over 1,000 riparian tree species in the stream-side areas of the farm's Israel Creek. Trees along with rotationally grazed pastures sequester carbon dioxide, helping to reduce impacts from climate change.

In a time where the oceans are acidifying due to an excess of carbon dioxide, farmland sequestering carbon is a win-win for climate change and agriculture. Rotationally grazed pastures can sequester up to 2,000 pounds of carbon dioxide per acre per year because of their soils' high levels of carbon in the form of organic matter. By contrast, many crop soils have lost organic matter due to erosion, reducing their ability to infiltrate and retain water. Organic matter is like a sponge, where every acre of land with healthy soils retain over 25,000 gallons of water for every one percent increase in organic matter.

Cornfields may have an average of two percent organic matter per acre while rotationally grazed pastures may have five percent or more organic matter. This increase makes the farmland more resilient during times of draught and greatly reduces flooding along streams during storm events. By stabilizing stream banks along Israel Creek, planting trees and rotationally grazing cattle, the Derrenbachers aremaking their farm more sustainable, building soil health, and improving water quality downstream in the Monocacy River watershed. The Monocacy is the largest tributary to the Potomac River, which eventually drains into the Chesapeake Bay.

Steve and Ruth Ann see building a sustainable farm as a win-win situation. Animals are healthier, pastures are more productive, and the farm's environmental impacts are reduced. Steve believes that farming has to be sustainable if it is going to be passed on to future generations. The time and energy they are investing in their farm now are building a resource that can be continuously transferred in the future. It is farmers like Steve and Ruth Ann Derrenbacher that serve as a shining example of how to run a successful farming operation while still catering to the health of the environment.

Learn more about how farmers across the watershed are working to improve both water quality and farm productivity in our Farmers' Success Stories series.