We're Half Way There: Smithfield Farm 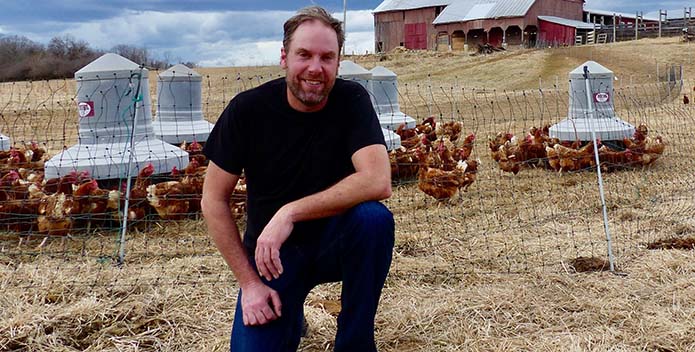 Forrest Pritchard has implemented best management practices which have raised the soil health on his farm.

(Berryville, VA)—Forrest Pritchard's life changed in 1996 when he became "farmer in chief" of his family farm. So did the direction of his farm.

"We made only $18.16 net profit that year from our cash grains of corn and soybeans," Pritchard said.

What a coincidence, the soil organic matter content of those fields averaged only 1.8 percent. But since then, soil health and profits have steadily climbed.

"The poor soil came from decades of commodity based, commodity dependent, corn and soybean production and not paying attention to soil health," Pritchard stressed.

The following year, he planted every crop field to perennial forage and converted their farming operation to a pasture-based, direct market system. Their soil organic matter now averages 5.3 percent.

"Soil health is everything," Pritchard said.

A soil organic matter test is one indicator of soil health. The higher the percent, the healthier the soil.

"Our goal at Smithfield Farm is to balance soil fertility. We do that by rotating livestock, importing all our hay and grain, using soil tests, and never leaving the soil bare," Pritchard added.

Smithfield Farm, a family operation that began in 1816, produces beef, lamb, pork, and chicken for direct market sales. It is now a very successful and profitable business.

Pritchard enrolled in USDA's Conservation Reserve Enhancement Program and the Environmental Quality Incentive Program (EQIP) in 2002. Funds and technical assistance from those programs helped him fence off streams from livestock and develop a rotational grazing system. Abundant, clean water, distributed throughout the farm, was critical for livestock health and production.

"Not only is Forrest a good steward of the land, he lets people know what he's doing by having field days and through his books and public speaking," Brent Barriteau, District Conservationist for the NRCS said.