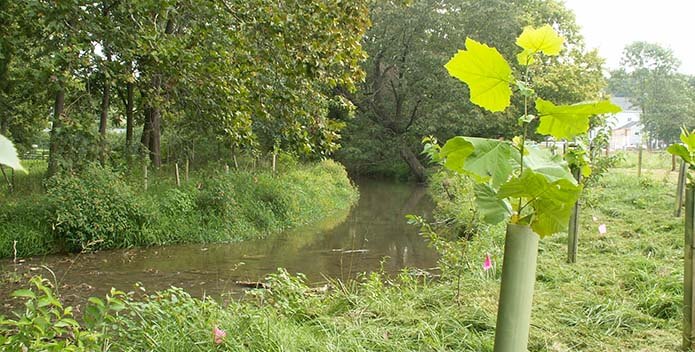 New saplings are the precursor to a lush riparian buffer along this farm creek.

The following first appeared in, The Star Democrat.

Larry Herr's contribution is modest: 50 to 75 new young trees, a biological buffer for Silver Creek, which babbles through 76 rolling acres of his farm in Lebanon County, Pennsylvania.

The native trees will support natural ecosystems and provide habitat and food for the brook trout that Herr cares so much about — and for birds, mammals, insects, and macroinvertebrates. Just as important, they are there to filter and absorb runoff from the pasture where Herr's small herd of beef cattle grazes.

Modest as it may be, Kerr's contribution is a vital piece of Pennsylvania's pollution reduction puzzle. His are among the 400 trees planted in the area by the Lebanon Valley Conservancy—and among the 31,000 planted around the state last month by the Keystone 10 Million Trees Partnership.

The new partnership is a statewide effort, coordinated by the Chesapeake Bay Foundation, to help clean and protect Pennsylvania's 86,000 miles of rivers and streams. Its goal is ambitious but necessary—plant 10 million trees along streams, streets and other priority landscapes by the end of 2025.

It's a collaborative partnership of national, regional, state, and local agencies; conservation organizations; outdoors enthusiasts; businesses; and citizens—who in the first week alone last month planted trees at more than 50 sites. Through the years and planting seasons ahead, the partnership is certain to not only grow but also evolve with the changing needs of the landscape—and partners themselves.

At the moment, roughly 19,000 miles of Pennsylvania waters are considered impaired, and the commonwealth continues to lag significantly behind in meeting its Bay cleanup goals. Meanwhile, the Keystone State is to have all practices in its mandated Watershed Implementation Plan in place by 2025, to meet Bay water quality goal. It missed its interim goal of having 60 percent in place by 2017.

They're playing catch-up, and trees are a vital part of the game. Streamside trees play a significant role in reducing the amount of the extremely harmful nitrogen, phosphorus, and sediment that flows from farmland and developed (tree-less) land.

The partnership is driven by the knowledge that trees are the most cost-effective tools for filtering and absorbing polluted runoff, stabilizing stream banks, and improving soil quality.

But the challenge standing before the partnership is taller than the mightiest native oak. The number of buffers in Penn's Woods will have to increase six-fold if the state is to get back on track toward meeting its pollution-reduction goals.

The commonwealth's Clean Water Blueprint calls for roughly 96,000 acres of additional forested buffers to be planted statewide from 2015 to 2025. Add in urban and suburban tree plantings, and the number comes to about 10 million trees.

To get the most bang for its river birches and other native trees, the partnership is putting its emphasis on the five counties in southcentral Pennsylvania that contribute more than 30 million pounds per year of nitrogen pollution from agriculture to the Chesapeake Bay. The Partnership can jump-start the commonwealth's progress with concentrated plantings in those counties.

There is no way the Bay Foundation, or any single entity, can expect to plant 10 million trees on its own. Adding that many trees and changing the tide in Pennsylvania will require unprecedented collaboration of hands-on volunteers and committed leadership.

Partners such as conservancies, conservation districts, watershed groups, and Trout Unlimited chapters regularly plant trees by the hundreds. Others, as on Larry Herr's farm, put them in by the dozen. Success will require all hands in all areas.

With its diverse mapping, the program will address both agricultural and urban/suburban runoff. On farms, the trees keep damaging nitrogen, phosphorus, and sediment out of the water. Trees placed in parks, municipal properties and other urban and suburban settings absorb and clean stormwater, reduce flooding, and help restore abandoned mine land.

With so many Pennsylvania partners seeing the planting of trees as a solution—and mobilizing to accomplish it—this is an opportunity for the legislature to elevate its own commitment of technical and financial support to get the commonwealth back on track.

A proposal to create a Keystone Tree Fund would allow a voluntary checkoff box on driver's license applications in Pennsylvania. Contributions would support the Forested Riparian Buffer and TreeVitalize programs managed by the state Department of Conservation and Natural Resources.

Local economic benefits cannot be overlooked. Tools and trees like those used on Larry Herr's farm are purchased from Pennsylvania businesses. This supply-chain approach is designed not only to create a stable and enduring market place, but also to create incentives for landowners and partners.

Reducing Pennsylvania's pollution loads will take many trees and many hands. The Keystone 10 Million Trees Partnership is committed to meeting the challenge. Clean water for future generations of Pennsylvanians and Bay watershed residents depends on it.