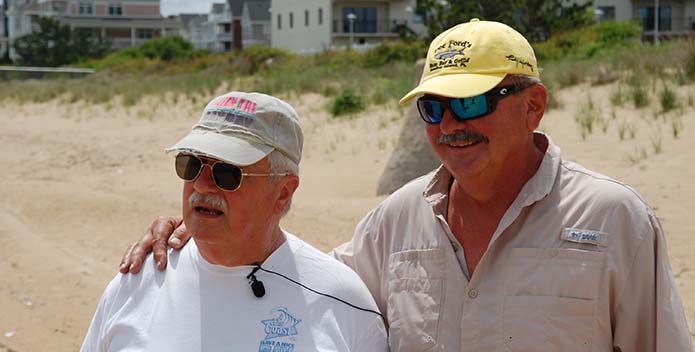 On May 15, a small group of people concerned about the state of the Bay and its beaches reconvened for the first time in many years. Robert Dean, Beth Richardson, and Steve Pahno, all founders of Clean the Bay Day, and Cameron Swain, a participant since the first event in 1989, joined current Chesapeake Bay Foundation staff and volunteers at Ocean View Beach Park in Norfolk. There they discussed what the first Saturday in June means to them.

Robert Dean is the man who brought it all together. In 1989, he gathered together a group of engaged citizens to do something about the contemptible state of the beach and Bay. The event owes its conception to him.

"Changing the world begins one cigarette butt at a time, so I'd say, especially to smokers out there, keep your butts off the beach."

He hopes people will take that advice and stop littering, so that one day this massive beach cleanup will be no longer necessary. 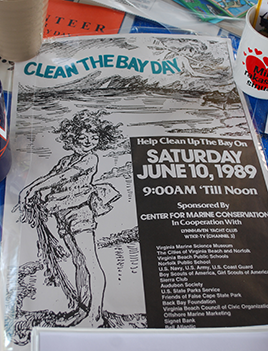 Baylee was the original Clean the Bay Day poster model.

"In the next 30 years, we want to bring Clean the Bay Day to an end. People will say enough is enough, I'll change my ways to protect my environment," Dean said.

Beth Richardson said she is first and foremost an environmentalist. A Norfolk native and Virginia Beach resident, she studied horticulture and architecture and was one of the empowered citizens that launched the first Clean the Bay Day in 1989.

"We are very happy that there is still enthusiasm for the environment and for protecting the wildlife. Of course, I'm going to be a tree hugger to the end," Richardson said.

Steve Pahno is a Norfolk local. He owned Dominion Printers in 1989 when Robert Dean asked him to print materials for Clean the Bay Day, catapulting him into the event. Since then, he has been the zone captain leading cleanups at Crab Creek off Pleasure House Point, where the Brock Environmental Center is located.

"I've been the zone captain over in Crab Creek for 28 years and when we started out there was a ton of trash, there were cars, there were washing machines. Now, the last year I did it, it was almost pristine," Pahno said.

Cameron Swain has participated in this event since the age of 16, when her father took her to volunteer on the first Clean the Bay Day. She has been a zone captain for years and also is the Assistant Director of False Cape State Park in Virginia Beach.

"My father was a big steward, an outdoorsman, he instilled the importance of taking care of our resources. Dragging that burlap bag around, I might not have seen the importance at that moment."

She went on to reflect on how she now views the importance of the event.

"You are creating new stewards, people who wouldn't have thought about it. At the end of the day, it was humbling. I did that—I helped pick up 600 pounds of trash."

What We Have to Lose   Volunteers   Water Quality   CBF in Virginia