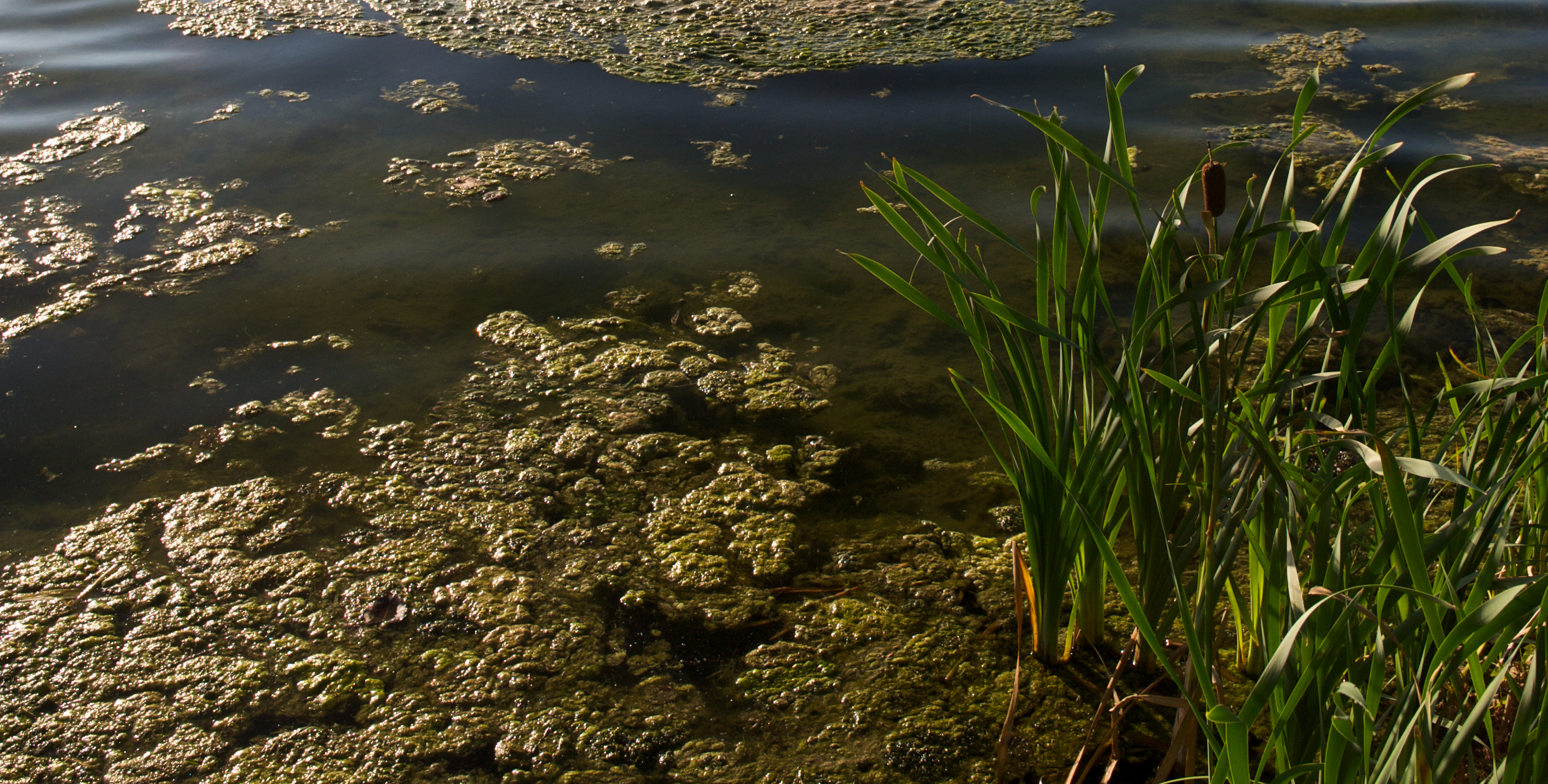 Algae in Silver Lake, on Cooks Creek, near Dayton, Virginia.

This was first published in the Richmond Times Dispatch.

Across the country, harmful algal blooms are making headlines by poisoning waterways, killing fish, and threatening our health. Just this summer, on the Gulf Coast of Florida, an unprecedented "red tide" made up of toxic algae forced lifeguards to wear respirators during beach patrols to avoid airborne toxins.

Closer to home, harmful algal blooms in parts of Lake Anna have recently led to a health advisory limiting swimming and water sports. On the James River near Hopewell, algal blooms consistently produce the same toxin that forced Toledo to shut down its water supply from Lake Erie in 2014. These toxins can accumulate in the organs of fish and crabs caught in the James and prevent shellfish from filtering the water. In large enough quantity, they can threaten the health of recreational swimmers and pets that use our local river. Bloom events in Hampton Roads have even occurred at levels that can kill juvenile oysters and fish.

Harmful algal blooms pose risks to local communities, economies, and tourism. During the heat of the summer, waterways should be an asset, not a liability.

On September 20, the State Water Control Board will have the opportunity to move toward public comment on—and ultimately the adoption of—water quality standards that will help protect the James River from harmful algal blooms.

Too much nitrogen and phosphorus pollution fuels the growth of these blooms. Warming water temperatures due to climate change are likely to further stimulate algae growth. These blooms are a major threat to the health of the Chesapeake Bay because they cause dead zones where oxygen levels in the water are too low to support aquatic life. While the James River is fortunate to have healthier oxygen levels than some other places in the Bay watershed, algae growth is still a big problem.

Virginia has been working to address algae in the James River since the 1990s. Over the past 20 years, substantial improvements in water quality monitoring, enhanced technology, and new research has improved our understanding of the threats harmful algae pose in the James River.

The evidence is stronger than ever after a recent $3 million study, approved by Virginia's General Assembly in 2011, on the drivers of algae blooms and the damage they cause in the James River. Over the past several years, experts from Virginia's universities and research institutions conducted monitoring, testing, and modeling to produce the best possible science on algae in the river. They identified harmful species, monitored the toxins they produce, and determined at what levels algal blooms hurt aquatic life.

With this new information, which has been peer reviewed by independent experts, the Virginia Department of Environmental Quality is now ready to receive public comment on revisions to the James River standards for chlorophyll, which is measured to determine the level of algae in the river. These updated standards will help determine the overall pollution limits for the James River as part of the Chesapeake Bay cleanup.

Over the past decade, partners including wastewater treatment plants, local governments, and farmers from across the James River watershed have made substantial progress toward reducing pollution. Recent research shows that these efforts are starting to pay off.

Still, a lot of work remains to ensure protection of the James River and the Chesapeake Bay. Virginia, along with the other states in the Bay watershed, is in the process of updating its Chesapeake Bay cleanup plan to achieve the remaining pollution reductions by a 2025 deadline. Establishing science-based limits on James River chlorophyll levels is an important part of this process.

Gov. Ralph Northam has made reaching Chesapeake Bay cleanup goals one of his top-tier priorities. Updating the James River chlorophyll standards will help keep Virginia on track to cleaning up its waters, and also ensure that we can fish, swim, and enjoy the waters around Richmond.

Virginia's history has been written on its waterways. These revised chlorophyll standards, which incorporate specific numeric limits for different sections of the James, break new ground in the long-term effort to restore clean water to the Chesapeake Bay. They also set an example for how waters across the country can manage threats from harmful algal blooms. This is a big step toward ensuring that our waterways—our greatest asset—do not become a liability.