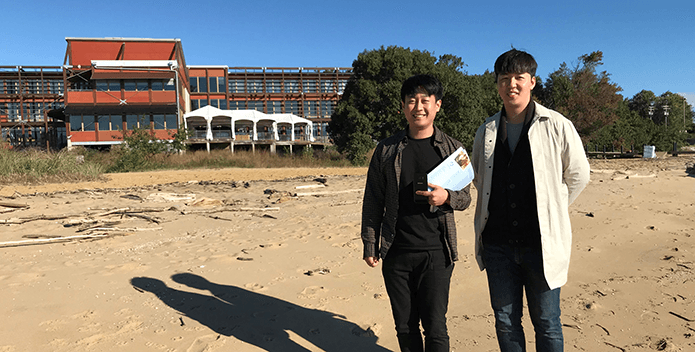 It's not every day the Chesapeake Bay Foundation (CBF) receives visitors from around the world in Annapolis.

But in October, CBF had the pleasure of welcoming two reporters—SeungHun Lee and Heehoon Son—who work for Busan Il-Bo, the largest daily newspaper in Busan, South Korea. Busan is the second-largest city in South Korea. It's a port city located on the country's southeastern coast and is home to about 3.4 million people.

Lee, who helped translate English to Korean for Son, said he had heard that environmental efforts in the Bay watershed were "successful" in restoring the ecology of the Bay. He said Busan is struggling with water quality issues possibly related to significant development along its coastline. 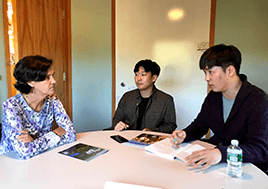 SeungHun Lee and Heehoon Son were able to sit down with CBF’s Director of Science and Agricultural Policy, Beth McGee, to learn how CBF works both internally, and with partners.

Beth McGee, CBF's Director of Science and Agricultural Policy, told the reporters that although Bay cleanup efforts have resulted in water quality improvements in recent years, there's still much more work to do until the Bay cleanup could be deemed a success.

McGee explained to them how CBF works as an intermediary between federal, state, and local governments that make up the Chesapeake Bay Program and as a watchdog to ensure the cleanup stays on track. The Bay Program is responsible for setting and tracking pollution reduction goals in the Bay watershed.

Lee and Son noted that Busan doesn't have a similar nonprofit or non-governmental organization that advocates for improving the water quality. They seemed eager to learn how CBF uses science to promote policies and legislation to improve the health of the Chesapeake Bay.

McGee explained the benefits of forest buffers on coast lines and farms as well as how oysters and underwater grasses help filter water to clean the Bay.

We also gave them a tour of the Philip Merrill Center, CBF's Annapolis headquarters, and told them about the importance of our educational programs, which give students and teachers hands-on opportunities to learn about environmental initiatives to improve the Bay's health.

The reporters headed back to South Korea after spending about a week in the United States (read the article they wrote). We thanked them for visiting, but they seemed much more thankful to us for hosting them!