This Week in the Watershed: The Coldest Ever 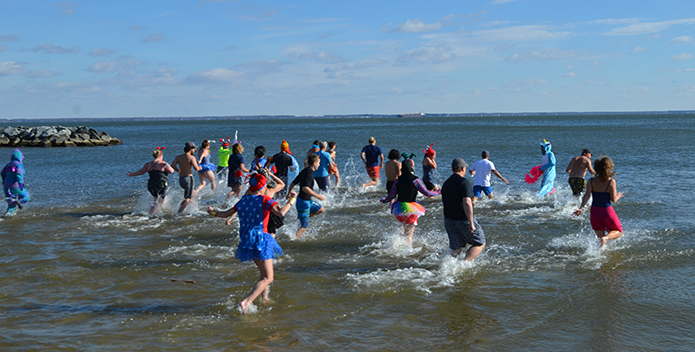 A bunch of crazy Bay lovers dash towards the frigid Bay waters to thank our generous members for their support on Giving Tuesday.

Many of us are still regaining feeling in our toes and ears. In what's now an annual tradition, a motley crew of brave crazy CBF staffers in Annapolis and Virginia Beach plunged into the frigid waters of the Chesapeake Bay and Lynnhaven River as a thank you to the hundreds of generous CBF members who gave on Giving Tuesday. And at 38 degrees with gusting winds, this year was the coldest of the plunges so far!

But the dip into numbing waters was worth it, as the generosity of our members never ceases to amaze us. Not only did we meet our $30,000 goal—we far exceeded it, making this CBF's best Giving Tuesday ever!

As we thaw out, the CBF staffers who took the plunge and the sane ones who didn't, will use every dollar given to defend and protect the Bay, including award-winning educational programs, on-the-ground restoration activities throughout the watershed, and advocacy initiatives at the federal, state, and local levels. With you by our side, we won't stop until the Bay and its rivers and streams are fully restored.

P.S. Did you miss out on Giving Tuesday? It's not too late to give and have your impact doubled—show your love for the Bay and its rivers and streams!

This Week in the Watershed: Oysters on the Half Size, Permitting Streams, and Poo Problems