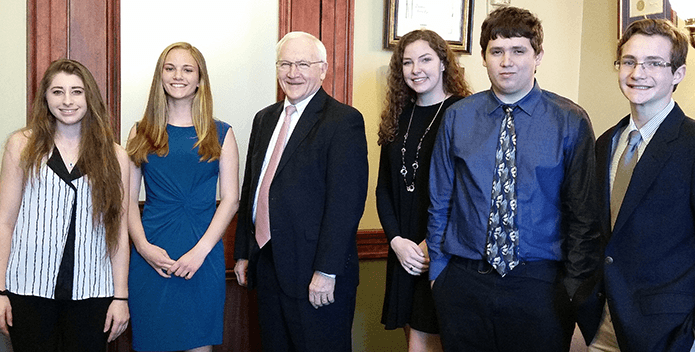 The teenagers stood up as Heather entered the room, wheeled in by Shanna Gay, her caretaker.

The students, who care about clean water and critters that depend on it, gently stroked Heather's smooth skin and then gathered around for a group photo.

They studied, volunteered, and met with legislators on behalf of the 18-year-old and others like her for more than two years. 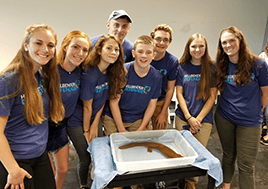 For some in the Student Leadership Council, meeting Heather the hellbender at the Pittsburgh Zoo was the first time they met a hellbender in person!

For some of the young people visiting the Pittsburgh Zoo and PPG Aquarium that day, it was their first chance to actually meet an Eastern hellbender.

Their crowning achievement was passage of Senate Bill 658, which they wrote, that would designate the Eastern hellbender as Pennsylvania's official state amphibian. But the measure stalled in a state House committee.

"These are a bunch of bright kids," Senator Yaw said of the CBF students when the bill was introduced. "They've got some good ideas. They studied this. We will do it. It showed them that they have a voice and it does make a difference."

"Long-term we are also looking to raise awareness for clean water in general, but within the legislative process as well, because it's an issue that is commonly overlooked," Anna Pauletta said. She was SLC president when the hellbender bill was introduced.

The students' hellbender campaign garnered local, state, and national attention. The effort made the front page of the Wall Street Journal and was a subject of the iconic Mark Trail Sunday comic strip. 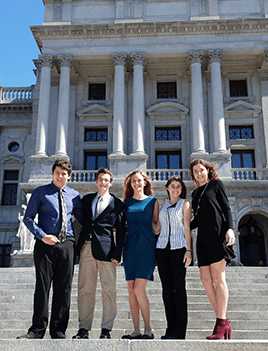 A lack of streamside trees along Commonwealth waterways allows waters to warm, polluted runoff to enter rivers and streams, and silt to build up in streambeds. As a result, habitat for hellbenders has been degraded and their numbers have been decimated in streams where they were plentiful as recently as 1990.

Senate Bill 658 essentially expired when the 2017-18 legislative session ended. But student leaders vow to go back to the drawing board and are determined to recognize and save the critter when the new session begins next year.

"We may write two bills next time, one for the House and one for the Senate," Mechanicsburg student Andrew Waldman said. "We're determined to make this happen through all our outreach, advocacy, and informing people as to why the hellbender is so important."

"We put too much work into it as a group," Fairfield student Travis Zimmerman added. "To just throw it away and move on to something else would be giving up on the hellbender, which we don't want to do."

"We are going to have to get more sponsors and keep pushing," Cumberland Valley student Lauren Braught said.

"I don't think we can possibly give up after putting all of this work and effort into such an amazing creature that we feel so passionate about," Abby Hebenton of Duquesne University and former SLC president said. "Now we see why this needs to be pushed through and we're more encouraged than ever to do it."

CBF's Student Leadership Program is open to high school students and is designed to give them a voice and an active role in clean water efforts in Pennsylvania.

More information about the campaign for the Eastern hellbender, go to www.cbf.org/hellbender.