This Week in the Watershed: A Slap in the Face 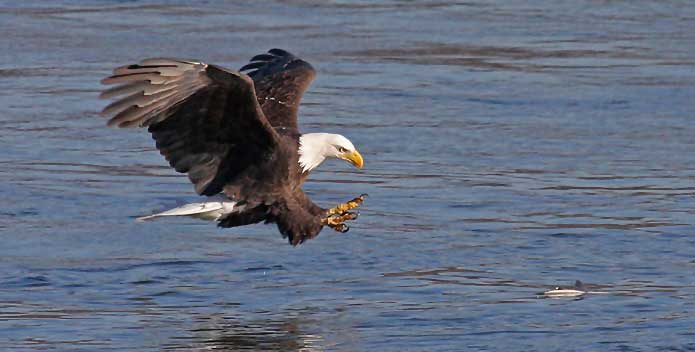 Bald eagle swoops down on a shad.

Whether on cable news, your social media feed, or at the family dinner table, political bickering feels inescapable. But across the Chesapeake Bay watershed, individuals of all political persuasions can all agree on one topic: clean water. Which is why we are so frustrated and confounded that the Trump administration proposed cutting Chesapeake Bay Program* funding by 90 percent from $73 million to $7.3 million.

This proposed cut would devastate efforts to restore local rivers, streams, and the Chesapeake Bay. As CBF President Will Baker stated following the budget release Monday, "This is a slap in the face to a national treasure finally beginning to recover from decades of pollution."

The evidence is clear that the Chesapeake Clean Water Blueprint is working. Dead zones are getting smaller, Bay grasses are increasing, and local economies are improving. But without the Chesapeake Bay Program the Blueprint will falter. To finish the job of saving the Bay, we must accelerate our efforts—not slow them down.

Fortunately, efforts to restore the Chesapeake Bay have long reflected the strong bipartisan support for clean water. We will continue to work with the region's members of Congress to fight back against a cut to one of the most important programs for clean water restoration. Instead, we advocate for an increase in investments for the Chesapeake Bay Program so watershed states can continue restoring the Bay in the face of new and increased challenges like climate change.

Join us in this critical fight by urging Congress to resist this assault on clean water. Tell them to not just restore funding, but increase the investments that are needed to finish the job of saving the Bay.

*To be clear: We are not referring to the Chesapeake Bay Foundation's budget, but the federal budget for EPA's Chesapeake Bay Program, which plays a critical role in coordinating and sustaining the federal/state partnership to restore the Bay and its rivers and streams.

A quick postscript: This Week in the Watershed is taking a brief hiatus while I care for my future Bay saver on paternity leave.

This Week in the Watershed: Striking for Climate, A Drastic Cut, and the Bay's New Air Force