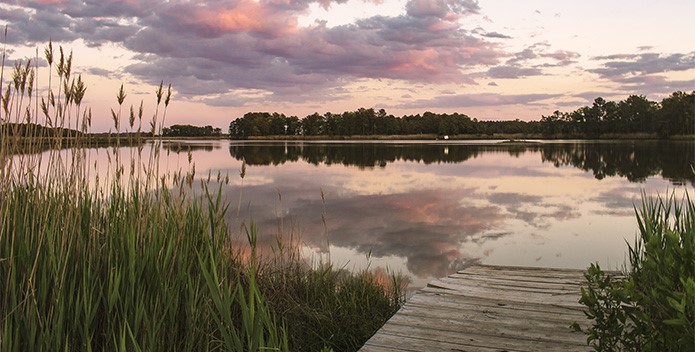 The sun sets over Warehouse Creek on Maryland's Kent Island.

The Maryland Clean Water Blueprint, also known as the Watershed Implementation Plan, is receiving its last update this year. The third phase of the blueprint will guide how state and local officials reduce nitrogen and phosphorous pollution from sources such as farms, wastewater plants, and urban and suburban developments by 2025.

The blueprint must get Maryland to the reductions necessary to meet its commitment to the 2010 federal "Total Maximum Daily Load." That's the agreement all states in the Chesapeake Bay watershed signed off on to improve Bay water quality. We're still reviewing Maryland's numbers, but the draft blueprint claims to meet the targets. If verified, this is good news for every Marylander who cares about clean water. However, we don't believe the state's initial draft invests enough in the types of practices that are best equipped to keep our rivers, creeks, and the Bay healthy over the long-term.

There is still time to ask state officials to make changes before the blueprint is finalized in August. We need your help to do so. Here are five things that will help you understand the draft and our early assessment of it:

1. The blueprint favors a short-term management approach over lasting actions capable of preventing pollution in the face of climate change and new development

Taken together, the draft relies on major wastewater plant upgrades and annual agricultural practices to reach the pollution reduction goals by 2025. These actions will drive very significant reductions in nitrogen and phosphorous loads over the short-term. But over time, their costs increase. Most also do little to manage the effects of climate change and stem the ever-increasing pollution from growing cities and suburban areas.

We hope the state will put stronger measures and assistance in place to ensure counties meet and expand stormwater reduction efforts. This will clean up local rivers, creeks, and streams and help reduce erosion, trap harmful chemicals, and clear the air. In addition, the state should include a program for developers to offset added pollution from new development, which will otherwise work against restoration efforts.

Fertilizer application and livestock manure are the primary sources of nitrogen and phosphorous pollution from agriculture. To reduce that pollution, Maryland plans to continue investing significantly in annual management practices such as cover crops and manure transport, while long-term, more cost-effective best management practices such as riparian forest buffers and rotational grazing are underfunded.

Cover crops such as grass, rye, clover and other small vegetation trap nutrients and help prevent soil erosion by reducing sediment and water runoff from fields. The program is an essential part of Maryland's clean water strategy, but the state's investment must be repeated every year and does not deliver as wide a range of environmental benefits as more permanent practices do. The state subsidizes farmers to plant nearly 500,000 acres of cover crops, which is estimated to cost the state about $25.5 million per year. The draft plan calls for only 2,500 additional acres of rotational grazing and 1,200 acres of new riparian forest buffers, two practices with low maintenance costs and extensive environmental benefits. We urge the state to find ways to expand these efforts.

3. The state is struggling to reduce stormwater pollution from cities and suburban areas

Nutrient pollution from impervious surfaces and lawns in urban and suburban areas account for about one-fifth of the state's nitrogen and phosphorous pollution.

The state uses Municipal Separate Storm Sewer System (MS4) permits to reduce stormwater runoff. The permits require counties to treat a specific percentage of water runoff from impervious surfaces. However, the permits are not making significant progress—pollution from these sources is increasing and by 2025, stormwater will contribute more pollution to the Bay than wastewater in Maryland, according to Maryland Department of the Environment estimates.

The blueprint draft expects Maryland's 10 most developed counties and Baltimore City to treat runoff from impervious surface at about half the pace required over the previous eight years. The draft cautions that the reduced pace may even be slower because new MS4 permits for these jurisdictions have not yet been finalized.

Stemming this source of pollution remains difficult. Commercial and residential developments built before 2000 generally didn't construct green infrastructure to treat water before it leaves the properties. Retrofits are expensive and often require the cooperation of private developers and homeowners to upgrade aging buildings. Nevertheless, stormwater management practices such as rain gardens, infiltration ponds, bioswales, and forest buffers are critical investments to improve local rivers and creeks, fight climate change, and address a growing source of pollution in Maryland.

4. Wastewater upgrades will help improve water quality in the main stem of the Chesapeake Bay

The third phase of the blueprint calls for finishing technical upgrades at Maryland's 67 largest municipal wastewater treatment plants. The remaining upgrades will deliver about 50 percent of the pollution reductions Maryland needs to reach the 2025 goals. While the work has required a sizeable investment—capital costs have run more than $100 million per year—the results are quantifiable, impactful, and reliable. This sector has benefited from a dedicated funding stream paid by user fees that ensures the upgrades can be financed and occur on a schedule. Once completed, the enhancements are estimated to reduce pollution from sewage treatment plants to the Bay by 70 percent compared to 1985.

5. There's still time to weigh in on the draft

Maryland released the draft blueprint April 12 and the public has the opportunity to weigh in on it until June 7. The state is hosting a webinar on May 17 to provide more information.

Residents interested in submitting formal comments on the draft can do so on the Maryland Department of Environment's website or via email—mde.chesapeakewip@maryland.gov.

The department will consider the comments it receives before finalizing the blueprint and submitting it to the Environmental Protection Agency August 9.

Maryland needs a plan that can meet 2025 goals and sustain them over the long term. We hope the state will make many of these recommended changes in the final blueprint. Long-term practices such as riparian forest buffers, rotational grazing, and, restoring wetlands will help the state reach its 2025 goals and prevent nutrient pollution in the future.

While the Bay has seen smaller dead zones, increasing grasses, and significant reductions in nitrogen and phosphorus pollution—the recovery remains fragile. More effort also needs to be made to reduce stormwater runoff in cities and suburban areas, grow the population of Maryland oysters, and actively stem the effects of climate change.

Below is a sample of some of the environmental practices that have been installed in Maryland or are being developed that state officials should consider doing more of in the last phase of the blueprint: 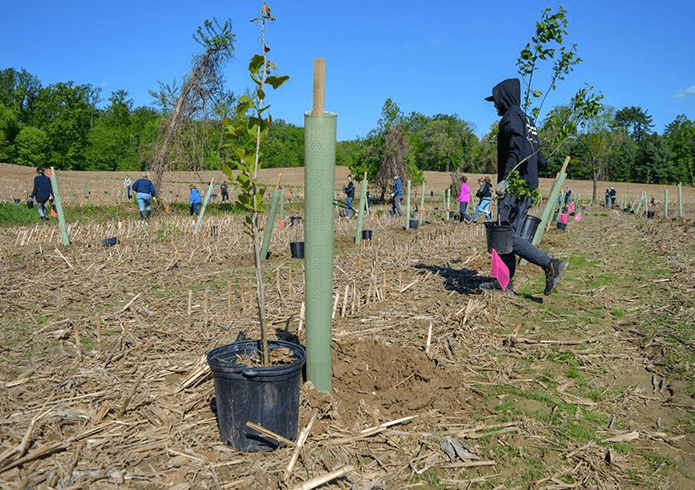 A tree planting in Pikesville near a Jones Falls tributary will help reduce runoff into the nearby stream.

A tree planting in Pikesville near a Jones Falls tributary will help reduce runoff into the nearby stream. 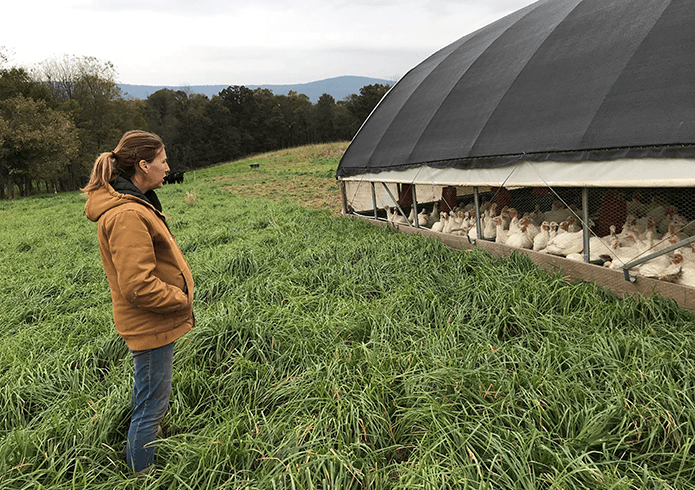 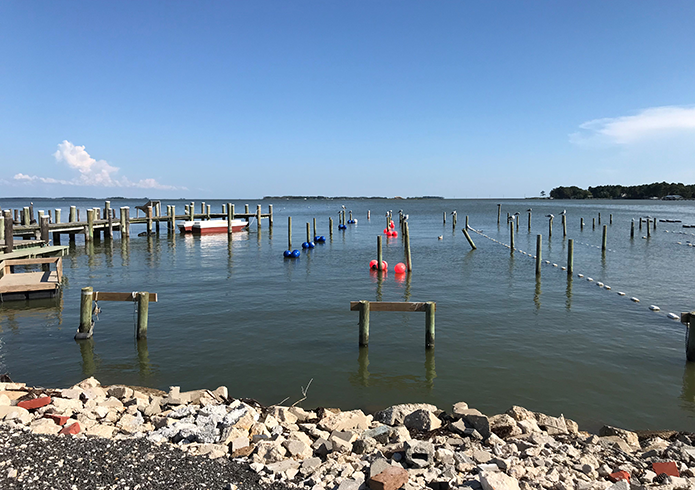 Oysters growing beneath the water at an oyster farm on Hooper’s Island help filter the water in the Bay.

Oysters growing beneath the water at an oyster farm on Hooper's Island help filter the water in the Bay. 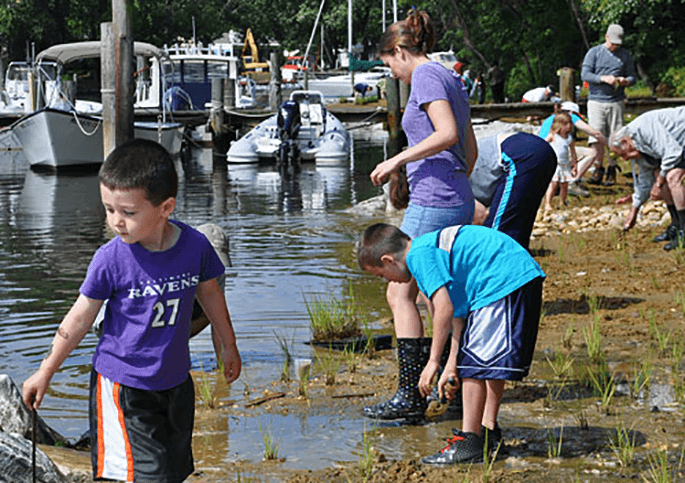 Volunteers help plant a living shoreline in the Parkwood area of Annapolis in 2012.

Volunteers help plant a living shoreline in the Parkwood area of Annapolis in 2012. 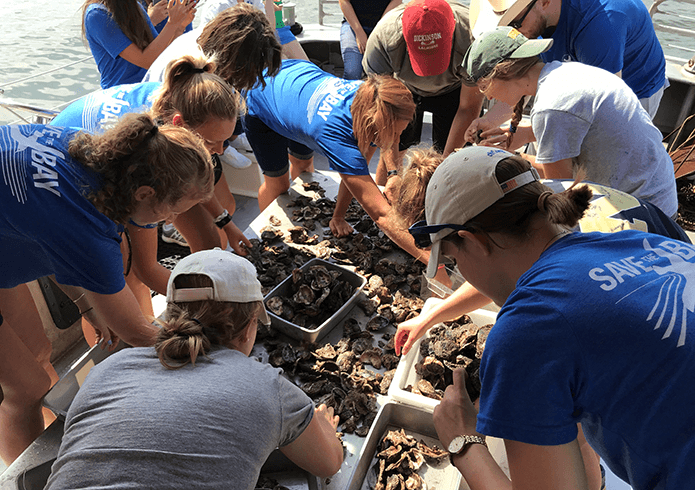 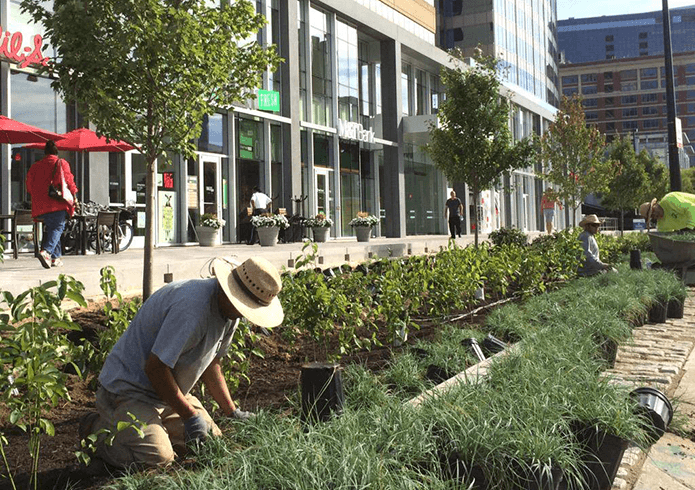 A bioswale along Pratt Street in downtown Baltimore helps filter rain water runoff before it drains into Baltimore harbor.

A bioswale along Pratt Street in downtown Baltimore helps filter rain water runoff before it drains into Baltimore harbor. 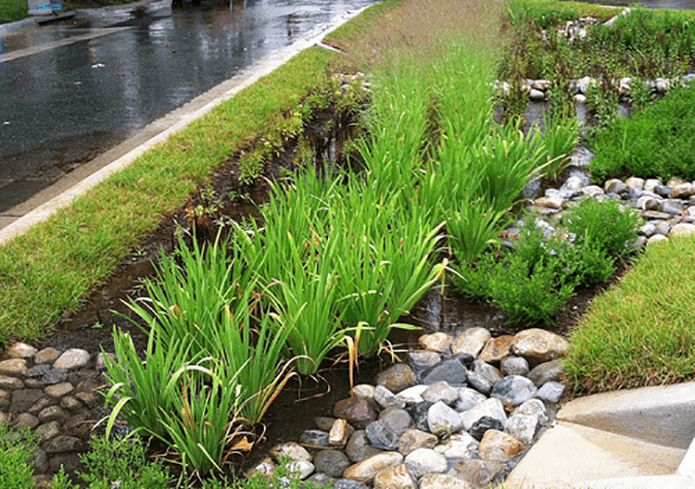 A bioswale along a road in Montgomery County is a piece of green infrastructure that removes debris and pollutants from runoff.

A bioswale along a road in Montgomery County is a piece of green infrastructure that removes debris and pollutants from runoff. 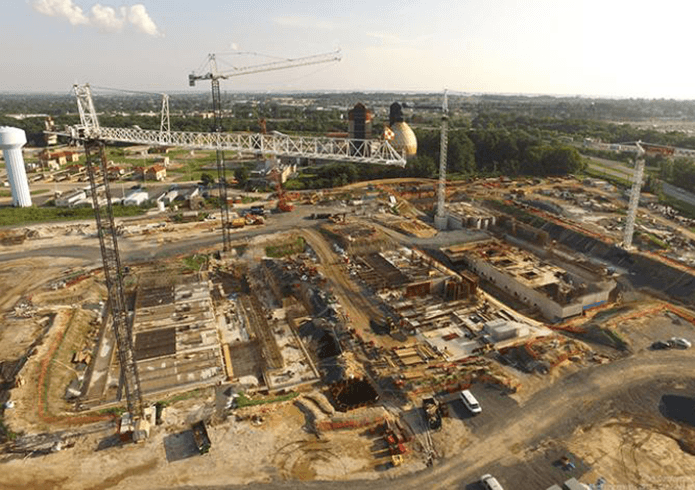 Construction is ongoing to upgrade the Back River Waste Water Treatment Plant in Baltimore to increase its capacity, improve screening facilities and pumping stations as well as construct two above-grade tanks to provide 36 million gallons of storage for wet weather. Upgrades are scheduled to be completed in 2021.

Construction is ongoing to upgrade the Back River Waste Water Treatment Plant in Baltimore to increase its capacity, improve screening facilities and pumping stations as well as construct two above-grade tanks to provide 36 million gallons of storage for wet weather. Upgrades are scheduled to be completed in 2021.