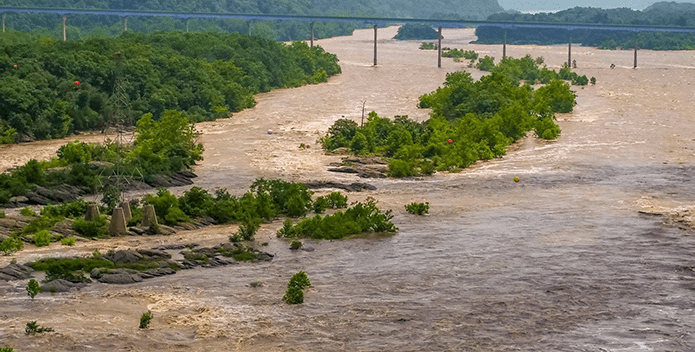 At first glance, "Watershed Implementation Plan" might give you sudden flashbacks to that boring high school class that put you to sleep. But upon closer inspection, these plans (also known as WIPs) are the backbone to cleaning our local waterways and saving a national treasure—the Chesapeake Bay.

Part of the Chesapeake Clean Water Blueprint, WIPs are developed by each state in the Bay's watershed to meet scheduled pollution reduction goals. Scientists agree that the Blueprint is the Bay's best, and perhaps last, chance for real restoration. Implemented in 2010, the Blueprint is unlike the failed state and federal agreements of the past. In addition to the WIPs, the Blueprint entails two-year milestones to evaluate progress and consequences for failure. And it's working. Underwater grasses are recovering, blue crab populations are rebounding, and the dead zone is shrinking.

But recovery is fragile. And increased challenges like climate change and regulatory rollbacks threaten success. To finish the job, the watershed states must do more to restore water quality. And EPA must hold the states accountable and impose consequences for failure.

Recently, the three main Bay states—Pennsylvania, Maryland, and Virginia—submitted their Phase III WIPs. While no state is completely on track to meet its clean water goals, Maryland and Virginia are close. Pennsylvania, however, remains woefully behind. So, what do we think of each state's WIP?

Starting with the good news first, Virginia's WIP is the most comprehensive and ambitious plan we've ever seen. It outlines concrete strategies that reduce pollution from all sectors, requiring contributions from developers, homeowners, farmers, local governments, and sewage plants. This plan, when fully implemented, delivers on the promise of clean streams in Virginia and a restored, more resilient Chesapeake Bay. But this draft plan can still be changed. Virginians, contact Virginia's Department of Environmental Quality—before the June 7 deadline—to express your support for this critical plan that gets the job done.

The Old Line State's WIP includes front-line measures critical to hitting clean water goals by the 2025 deadline. Unfortunately, we don't believe the draft invests enough in the types of practices that can best keep our rivers, streams, and the Chesapeake Bay healthy over the long term. Natural filters like forest buffers, wetlands, and well-managed pasture lands are cost-effective and have a lasting impact on our waters and our climate. The state's plan should include more of them. The draft is also missing a solid plan to offset new pollution associated with land development. This draft is under review and there is still time to ask state officials to make changes. Contact the Maryland Department of Environment—before the June 7 deadline—and tell them you want the WIP changed to ensure clean water for future generations of Marylanders.

The Keystone State's WIP is crippled by two critical shortcomings. Under the current plan, Pennsylvania will fall short in meeting its nitrogen load reduction goal. And perhaps most critically, the resources to implement the plan don't exist, as there's a shortfall in annual funding of nearly $257 million. And although the plan contains several proposed funding sources, none have been passed. This is very disappointing, given Pennsylvania is already failing to meet its goals. Before any specifics of Pennsylvania's WIP are addressed, it's crucial to first contend with the funding shortfall which threatens to stunt clean water progress. Pennsylvanians, take action now and tell your state legislators to fully fund Pennsylvania's Clean Water Blueprint for cleaner rivers and streams.

The health of our region's environment, our way of life, and nearly $130 billion in natural benefits annually are at stake. And while Virginia and Maryland are mostly on track, we cannot overlook Pennsylvania's shortfalls. As CBF President Will Baker highlights, "A chain is only as strong as its weakest link, and that is also true for the partnership working to restore water quality across the region. Today, unfortunately, Pennsylvania's link is not only weak, it is broken."

But with our army of supporters advocating for clean water, we will continue driving progress to restore and protect our local rivers and streams and ultimately realize our battle cry: Save the Bay.