Blue Catfish: How to Think about an Invasive Species 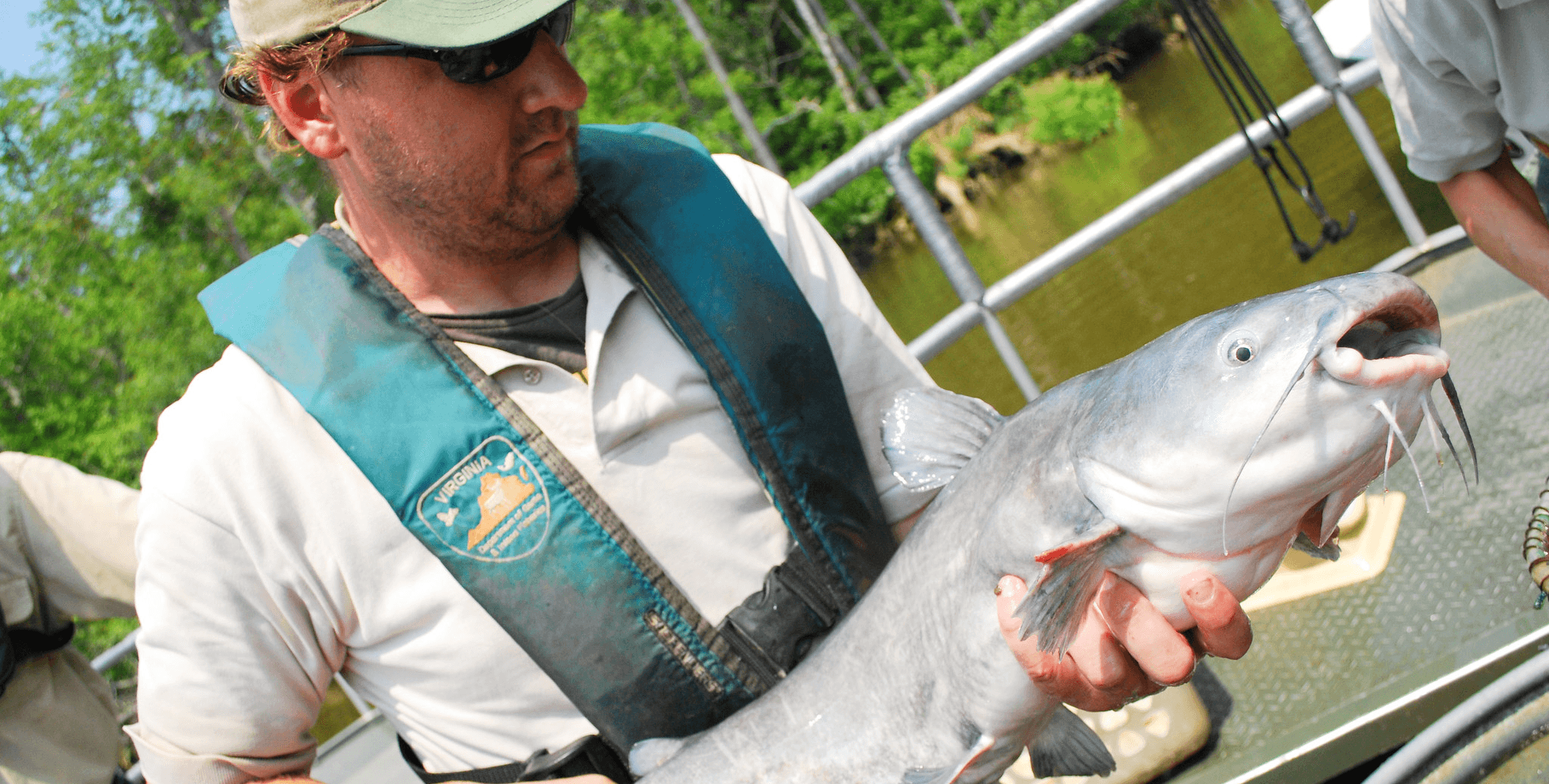 A fisheries biologist with the Virginia Department of Game and Inland Fisheries examines a blue catfish caught during a research monitoring program.

The horses are out of the barn. Blue catfish, which are native fresh-water fish, have the run of most of the Chesapeake, thanks to the record rains of the past eighteen months throughout the Chesapeake watershed. According to NOAA's Chesapeake Bay Interpretive Buoy System (CBIBS), the salinity range over the past month at the mouth of the Potomac River has been 6-8 Practical Salinity Units, compared with 10-11 PSUs over the same period of 2017 (about one-third the salinity of sea water). North of the Potomac, the Upper Bay has been even fresher (In Annapolis, the salinity has dropped to 2-4 from a usual salinity of 6-7.5). The Chesapeake Bay Foundation's education workboats have been catching them off Annapolis during school field trips this spring.

Scientists have found that the big fish, introduced into the James and Rappahannock Rivers in the 1970s and the Potomac in the 1980s, can tolerate salinities up to 15 PSUs, and they have found a few in water even saltier than that.

So, are these prolific, omnivorous natives of the Mississippi River system, which can grow to weights over 100 pounds, a blessing or a curse here in the Chesapeake? Are they damaging the big Chesapeake rivers by eating too many blue crabs or indigenous fish? On the surface, the term invasive species carries an automatic stigma, but the truth is more complex. First, they have become well-established here, whether we like them or not. Second, they have a following. Recreational anglers, for whom the first introductions were made by Virginia fishery scientists, love them for their size and fighting ability, as well as their eating qualities. Commercial markets have developed for them around Richmond and Washington, DC, providing good opportunities for watermen to catch them in hoop nets and other gear. You'll find locally-caught, fresh fillets in seafood markets and in restaurant fish tacos. Moreover, the populations of blues in the Rappahannock and the James appear to be adjusting to available food and space, with growth beginning to slow.

Thus the Chesapeake Bay Program Partnership asked its Sustainable Fisheries Goal Implementation Team to develop an Invasive Catfish Policy Adoption Statement, which notes that "the potential risk posed by blue catfish…on native species warrants action to examine potential measures to reduce densities and limit range expansion, and to evaluate possible negative ecological impacts." The aim is "achieving effective management of the species as a fisheries resource and… reducing negative impacts of this non-native resident." It is particularly important to assess the ecological effects the blue cats are having in specific river systems, because those effects have already shown themselves to be variable. Sizes and growth rates, for example, are much lower in the Rappahannock than in the James, and diet study results have varied between the James and the Potomac.

A recent blog post on chesapeakecatfish.com by Virginia Tech Ph.D. student Corbin Hilling summarizes blue catfish mobility this way: "The main lessons from these studies are that catfish are highly mobile, but there is considerable individual variability in movement behavior. Consequently, management of large catfishes may require large spatial boundaries as fish may move between jurisdictions."

At this point, it's hard to say whether blue catfish in the Chesapeake are good or bad. They just ARE. We've turned them loose, partly on purpose and partly by accident (rain). So what now? My friend Capt. Mike Ostrander has twenty years' experience with the fish in his Discover the James fish and wildlife tours. He argues that the lure of trophy blue catfish has drawn hundreds of people to the river, but once there, many have become even more interested in the health of its waters, its bald eagles, its ospreys, its great blue herons, and even its small but growing stock of Atlantic sturgeon. "The best solution to blue cats," he says, "is fishing: catch 'em and eat 'em. But pay attention to the science as it evolves."

Fisheries   Fishing   How To