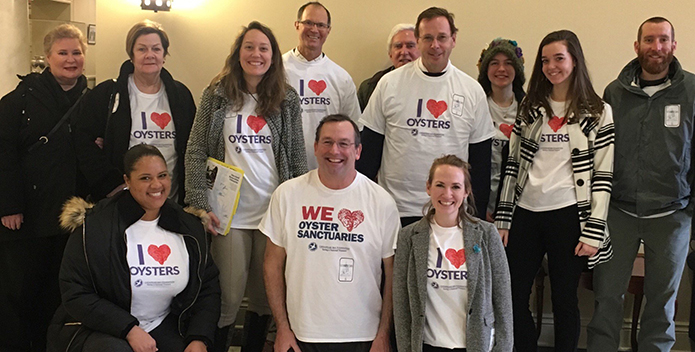 On a blustery and snowy March day at Maryland's General Assembly, about a dozen hearty oyster advocates were making their case. The assembled crew of volunteers and Chesapeake Bay Foundation staff members were traveling office to office to urge lawmakers to support two bills designed to help increase the oyster population in Maryland's portion of the Chesapeake Bay.

Among them was Lani Hummel, of Annapolis, a "semi-retired" former lobbyist and congressional researcher who now dedicates some of her time toward supporting environmental causes with CBF. She started he local environmental advocacy efforts after taking a VoiCeS—Volunteers as Chesapeake Stewards—class taught by CBF staff.

"It was fantastic," said Hummel. "I can not recommend highly enough the VoiCeS class. One of things the class taught me was just how much I didn't know."

She explained that in the class she learned about the water-filtering benefits of oysters and "the incredible work they do" to build reef structures that benefit fish, crabs, and other marine life.

"I didn't really know how depleted the oyster population was at first," Hummel said. "When I heard it was one percent or less of historic populations, I was horrified. I told CBF I want to work on oyster restoration."

For decades, scientists have warned that oysters in Maryland were in steep decline. In November 2018, the state released its first-ever comprehensive oyster stock assessment. Its top-line finding was that Maryland's adult oyster population had dropped from about 600 million in 1999 to 300 million in 2018. The study also determined about half of the state's oyster harvest areas were being overfished.

In response, CBF pushed the General Assembly to pass a bill to permanently protect the state's five oyster restoration sanctuaries from harvest as well as a bill to create a consensus-based process to draft a new oyster fishery management plan. The restoration sanctuaries are areas where government agencies and nonprofit organizations have planted millions of juvenile oysters to recreate the three-dimensional reefs that once thrived in the Bay. The fishery management plan would create a collaborative process between watermen, environmental advocates, and university scientists to draft a plan to end oyster overharvesting and over time increase the oyster population in the state.

The advocates who gathered with CBF staff in March met with lawmakers and distributed information throughout the legislature to promote the two oyster bills.

Hummel said she focused on science-based facts about Maryland's oyster population, many of which came from the new stock assessment. She found that the legislators were receptive to the arguments to protect oysters once she presented them with evidence of overharvesting and the low population numbers.

One item she found particularly helpful was a poll showing widespread support from Marylanders for oyster sanctuaries.

"When I testified, I put that poll in my testimony at the last minute, and the legislators—even the opponents [of the sanctuary bill], perked up," Hummel said. "That, they relate to, in a big way."

Ultimately, both bills passed the General Assembly and then both were vetoed by Gov. Larry Hogan. The sanctuary protection bill was vetoed with enough time left in the three-month session for lawmakers to override the governor's veto and enact it into law. The consensus fishery management plan bill passed too late in the session and remains vetoed, although some lawmakers have publicly discussed plans to override Hogan's veto when they return for the 2020 session in January.

When the oyster restoration sanctuary bill became law, Hummel said she felt a sense of accomplishment.

"It was really good," Hummel said. "The one thing I've learned in working in environmental advocacy is you better celebrate your victories when you can. And, also, you can't assume just because your bill was passed that's going to be the scenario going forward. Because whoever lost out on that bill is already working on measures to get around it, to get it defeated, whatever. That's what we've found with oysters."

Registration for this fall's VoiCeS class is now open! With courses in central Virginia, Baltimore, Annapolis, and Maryland's Eastern Shore, there's opportunity for everyone to attend our premier adult education program. Also stay tuned for a course in Hampton Roads later this fall!