Bringing Back the Bay's Favorite Bivalve 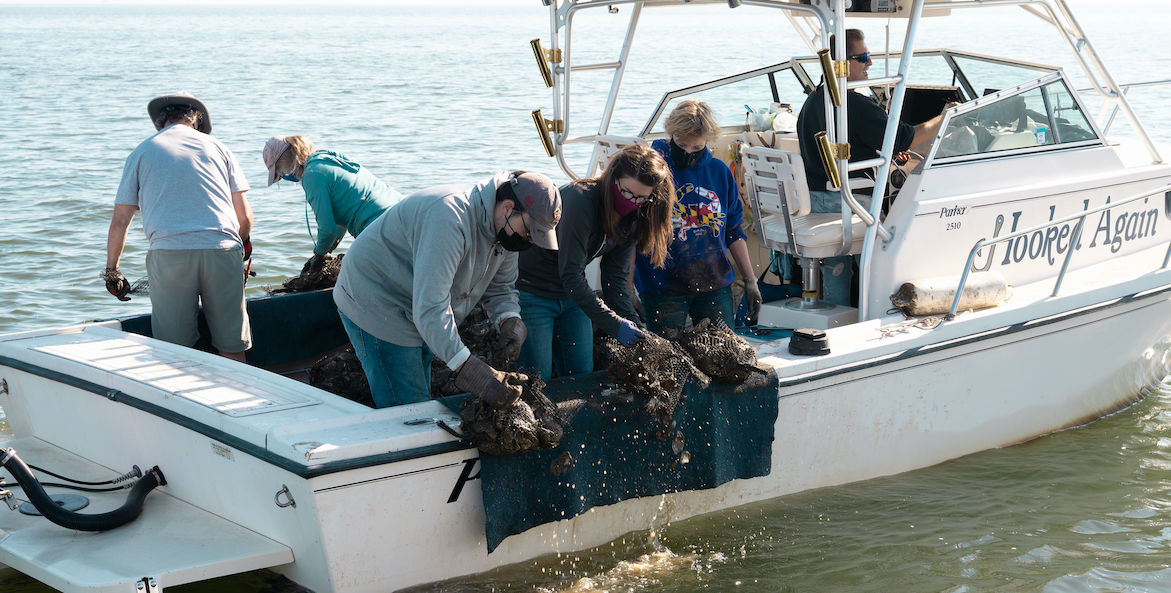 From the largest oyster restoration project in the world to an energized local planting, across Maryland, oyster reefs are being restored

Oysters are making a comeback in Herring Bay and elsewhere in Maryland thanks to small- and large-scale restoration efforts in local communities and several Chesapeake Bay tributaries.

Inspired by successes in neighboring waters, the Advocates for Herring Bay (AHB) began restoring the historic Herring Bay Oyster Sanctuary in 2019 with a goal of planting 1 million spat (or baby oysters) in the sanctuary by the end of 2021.

The project got a big boost in November when we donated more than 200,000 oyster spat for placement on the bar for ecological preservation. The spat was set on discarded oyster shells at our Maryland Oyster Restoration Center in Shady Side, Maryland, and then provided to AHB volunteers who transported the oysters by boat to the planting site and deposited the bivalves into the water. The spat is expected to mature into adult oysters in about three years.

Oysters are an integral part of the Bay’s ecosystem. An adult oyster can filter up to 50 gallons of water per day and their reefs provide habitat to fish, crabs, and other marine life as well as help protect shorelines. The bivalves can also sequester carbon in their shells, helping to reduce greenhouse gas emissions.

As part of the Chesapeake Bay cleanup plan, Maryland and Virginia agreed to replenish 10 Bay tributaries (five of which are found in Maryland) with oysters by 2025. Next year, work is scheduled to begin in earnest in the Manokin River. Maryland’s Department of Natural Resources (DNR) will be leading the work in the Manokin, where about 441 acres of Bay bottom will be planted with oysters. When finished, the project will supplant the current largest oyster restoration project—the Little Choptank River on the Eastern Shore, where 358 acres of oyster reefs have been restored.

The Manokin, Tred Avon, Upper St. Mary’s, and Little Choptank rivers as well as Harris Creek make up the five tributaries selected for large-scale oyster restoration in the state. CBF is working to complete a National Oceanic and Atmospheric Administration grant to plant 37 million spat-on-shell in the Tred Avon on the Eastern Shore.

“The reality is oysters remain at historically low population levels in Maryland,” says Patrick Beall, CBF Maryland Oyster Restoration Specialist. “To reverse the long-term decline, we’re working to provide spat-on-shell oysters to oyster gardeners and community groups as well as partnering with federal agencies to conduct large-scale oyster plantings in Chesapeake Bay tributaries. The Herring Bay oyster planting as well as our work in the Tred Avon are examples of those ongoing efforts.”

Both the large-scale and smaller-scale projects aim to show the environmental benefits of restoring oyster reefs in sanctuaries where oysters are protected from harvest. These areas are often used for recreational sports fishing, boating, and swimming.

“Multiple scientific studies have found significant habitat benefits for other species when oyster reefs are built up and allowed to flourish,” noted AHB Project Co-chair Birgit Sharp. “Add in the filtration, carbon sequestration, and shoreline benefits of oyster reefs, and you have the prospect of a big win for the environment and maritime economy of Herring Bay.”

Community Groups Will Always Be Key

While state and federal agencies have led the work on the large-scale restoration projects, local community groups are organizing to restore reefs in their backyard.

“On the Eastern Shore, restoration is largely being done by the state, but here on the Western Shore, citizens have taken the matter into their own hands,” says AHB Project Co-chair, Mike Zuralow. “We got advice from folks restoring oyster reefs in the West, South, and Severn Rivers, and support from the Chesapeake Beach Oyster Cultivation Society in Calvert County.”

Recently, we worked with Arundel Rivers Federation to install oyster reef balls set with spat next to an eroding shoreline near Turnbull Estates in Glebe Bay. CBF scientists monitoring the work have found the oysters are surviving and growing at the shoreline reef project, which we hope will stabilize the shoreline and create new fish habitat.

As new oysters are added to more and more reefs, scientists plan to monitor the reefs to see how the oysters are faring. Ongoing scientific monitoring of the oysters planted in Harris Creek, the first large-scale tributary to be restored, found 75 percent of the reefs built in the creek met the target density goal of 50 oysters per square meter while 98 percent met the minimum density goal of 15 oysters per square meter. AHB plans to monitor its smaller reef to determine how the newly planted oysters are faring in Herring Bay.

Other stakeholders in the Herring Bay watershed share AHB and CBF’s interest in expanding restoration efforts in the future.

“Sustainable and protected oyster reefs are a key ingredient in our quest to keep Herring Bay a model of achieving and maintaining clean water on the Chesapeake Bay,” said Steuart and Hamilton Chaney, who own and operate the Herrington Harbour Marinas. “Herring Bay is home to thousands of visiting and resident recreational boaters who value clean water and the natural environment. That’s why we championed the No Discharge Zone designation in Herring Bay and were founding members of the Maryland Clean Marina Program. We thank and support our valued neighbors and CBF for their efforts to restore oyster reefs in Herring Bay."

The oysters planted in Herring Bay as well as those in the large-scale restoration tributaries will count toward the Chesapeake Oyster Alliance’s goal of adding 10 billion oysters to the Bay by 2025. The alliance is composed of environmental organizations, government agencies, community groups, and oyster farmers that are all working to restore the Bay’s oyster population.