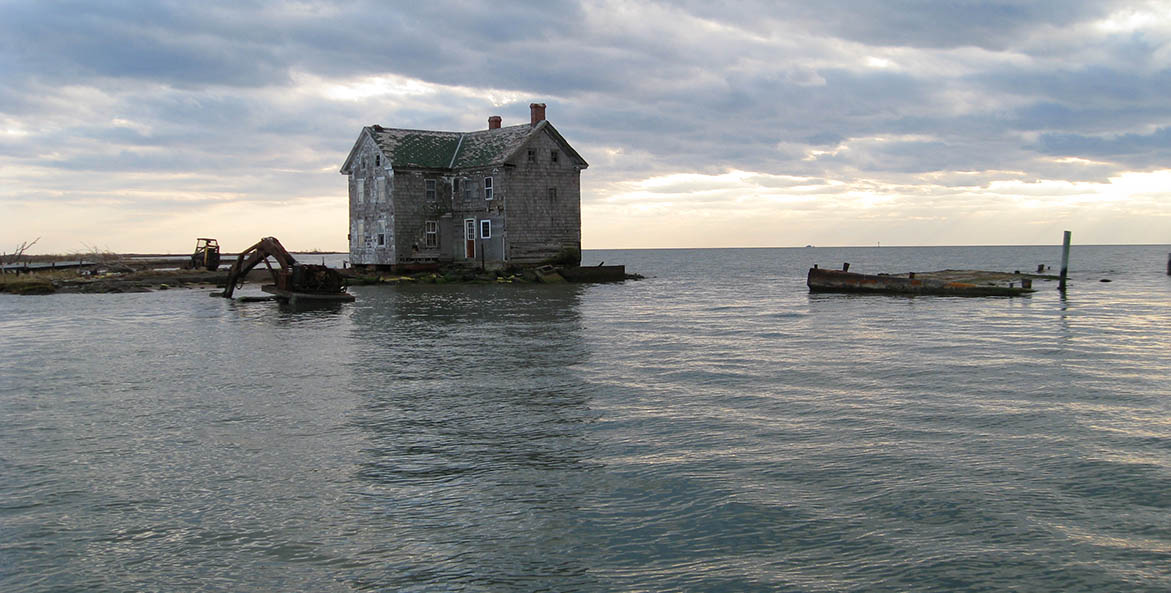 Last house standing on Holland Island before it fell into the Bay in 2010. Sea level rise in the Chesapeake is just one dramatic consequence of climate change.

Climate change has been called an existential crisis, and rightly so. It is urgent and global—a fact that drew prominent world leaders and thousands of activists to Glasgow, Scotland last month. But for those of us who live in the Chesapeake Bay region, it's personal. And in its next term, the U.S. Supreme Court will consider a climate change case that could directly affect our lives and homes.

At issue will be the scope of the U.S. Environmental Protection Agency's authority to limit climate pollution from power plants. That may sound like the kind of esoteric topic only a lawyer could love. In fact, it should concern everyone who loves the Chesapeake Bay, the Susquehanna River, the Shenandoah River and the rest of the Bay tributaries that bring commerce, recreation, seafood and joy to our lives.

We live on the front lines of the climate crisis.

The surface of the Chesapeake Bay is rising at double the rate seen in most other parts of the country. Low-lying coastal communities like Annapolis and Old Town Alexandria are flooded so often that we're no longer startled to see people kayaking their flooded streets. The Bay's water level is predicted to rise 2 feet in less than 30 years. It could increase anywhere from 3–6 feet by the end of this century if we fail to slow climate change.

Further inland, farmers in Lancaster County, PA, must grapple with new pests, altered growing seasons and worsening soil erosion fueled by new weather patterns and more frequent and intense storms. From 1971 to 2000, Pennsylvania averaged just five days a year when the temperature topped 90 degrees. By 2050, it is expected to average 37 sweltering days annually.

Rising temperatures in freshwater rivers and streams drive game fish like brook trout and smallmouth bass from their accustomed habitat, affect when they migrate and spawn, and make them more vulnerable to parasites and diseases. The result is unpredictable fishing seasons that disappoint recreational anglers and threaten the bottom line of the tackle shops, diners, campgrounds and other local small businesses that serve them.

Communities of color and low-income communities around the region are often hit the hardest by the rising temperatures, extreme weather and more-frequent flooding brought on by climate change. Compounding the problem, people in those communities more likely lack the money to relocate, not to mention lack the political clout that might help them secure financial assistance to recover and rebuild.

Formerly redlined communities of color, such as Southside Richmond, have become "heat islands," where too much pavement and too few trees not only increase residents' discomfort, but also their chances of developing chronic illnesses like heart disease. And, of course, they have a measurably higher risk of health problems directly related to excessive heat—which will only be made worse by rising temperatures.

The organization I work for, the Chesapeake Bay Foundation, has been dedicated for more than 50 years to restoring the Bay and the tens of thousands of miles of creeks, streams and rivers that feed into it.

But unchecked climate change could wipe out and ultimately overtake the progress we and other organizations, as well as government agencies, have made cleaning up the Bay. Warming waters hold less oxygen to sustain the plant and marine life that support our multibillion-dollar seafood industry and the communities whose way of life depends on it. Rising seas continue to swallow up islands across the Bay.

The Bay's total maximum daily load, or Clean Water Blueprint, issued by the EPA in 2010, spells out the pollution reductions that the six states in the Bay watershed, the District of Columbia and the EPA must make to restore the health and productivity of the Bay.

All of the partners pledged to adopt by 2025 the policies and practices needed to reduce water pollution to meet those goals. Time is running out, and the states, particularly Pennsylvania, still have a lot of work to do.

Without aggressive action to reduce greenhouse gas emissions, we simply cannot save this national treasure.

That's why CBF welcomed the Obama administration's Clean Power Plan in 2015. This historic rule was the federal government's first attempt to control carbon emissions from fossil-fuel-fired power plants, then the nation's largest source of carbon pollution. Today, power plants are second only to transportation in emitting greenhouse gases.

The Trump administration repealed and replaced the Clean Power Plan in 2019 with a significantly weaker rule. It would have worsened the climate change effects already wreaking havoc across the watershed and made it harder to cut pollution down to the Blueprint limits.

In 2019, CBF joined other environmental and public health advocacy groups suing to overturn the weaker Trump rule. On Jan. 19, the U.S. Court of Appeals for the District of Columbia Circuit vacated the rule and directed the EPA to write a new one regulating carbon emissions from power plants.

Coal-producing states and coal companies quickly urged the Supreme Court to review the decision. Although the Biden administration is drafting a new rule, the high court surprised many observers by deciding to hear their appeal when it reconvenes in early 2022.

It's an important legal argument, to be sure. But when you live on the front lines of climate change, making sure we fight it aggressively is personal, too.