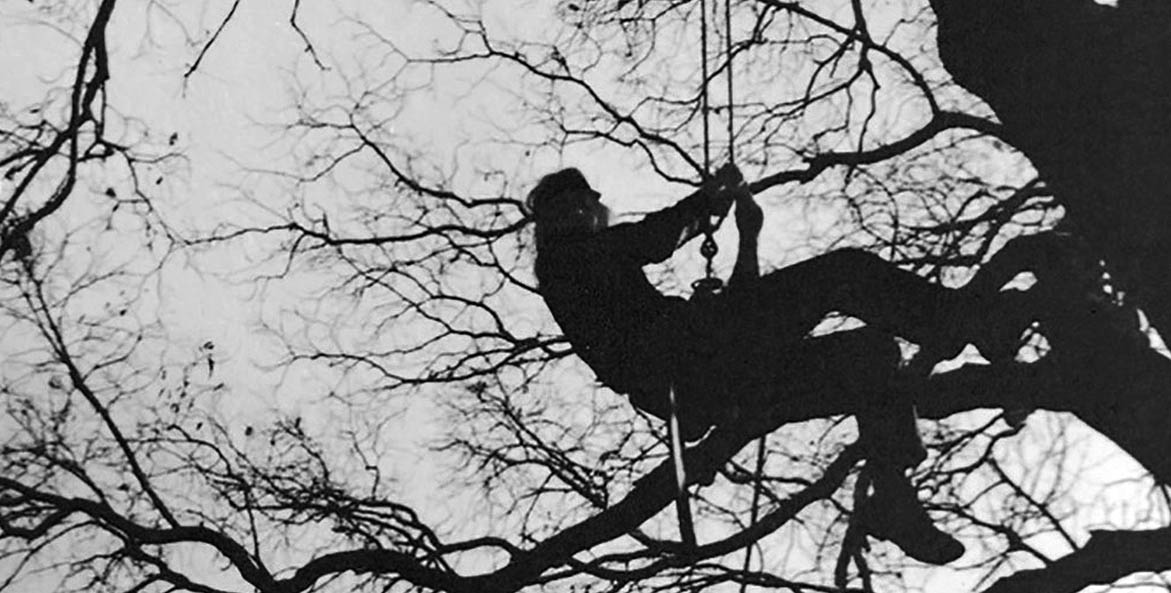 Young Will Baker was working as a tree surgeon when board member Truman Semans approached him about joining CBF.

In the lore of the Chesapeake Bay Foundation, there is an oft-told story. It goes like this. One day in 1976, when the Foundation was not yet a decade old, board member Truman Semans approached a tree on his property. Up in the tree was a young man. He was fresh out of college and doing tree work for the summer.

"Will," Semans called up to him. "Why don't you come down out of that tree and come help me save the Bay?"

Part average Joe, part enigma, Will Baker thus descended from the canopy. In five short years he became CBF's acting executive director, then executive director. Over the next four decades and more, he built the single largest, most powerful movement dedicated to saving, protecting, and restoring the Chesapeake Bay.

The story is true. But in 1976, its outcome was far from assured. Public concern about the Bay existed, but scientific understanding was fractured and incomplete. Work was just getting underway at the Environmental Protection Agency on a six-year, $30 million study of the Bay's condition, mandated by Congress. CBF counted a couple thousand members and was still finding its footing.

"It was more of a marching and chowder society," Semans says. "It was great fun, but [executive director] Arthur Sherwood really needed someone to help him out."

That someone was Will Baker. Semans knew Baker's parents and recalls meeting him for the first time when he was just 15 years old. Like most teenagers in those days, he says Will sported a beard, long hair, and sandals.

By 1977, a small black-and-white photograph in the March issue of the CBF News shows Baker with hair still long, the beard replaced by a mustache. It accompanies one brusque paragraph: "A freelance writer and part-time tree surgeon, Mr. Baker is helping the Foundation as a writer and editor of the CBF News. He is also working out-of-doors as a project manager at the Meredith Creek Outdoor Education Center."

Baker was soon spending more time in CBF's office on the second floor of an old church in Annapolis. He was bright, with an unending appetite for knowledge about the Bay and all that ailed it, remembers Mary Tod Winchester, who began volunteering with CBF in 1971 and retired as Vice President for Administration 46 years later. It didn't take long for people to notice him—even if they couldn't quite pinpoint his role.

"A reporter called one day and said, 'I'm supposed to talk to Will Baker—what's his title?' And I said, 'He's assistant to the Executive Director,'" Winchester remembers. "[The reporter] said, 'Well what does that mean? He gets you lunch?' So almost immediately Will's title changed and he became Assistant Executive Director."

Far from retrieving lunch, Baker was honing what would become his hallmark: a deep-rooted, far-reaching understanding of Bay science and politics; an uncanny ability to articulate the urgency and importance of Bay issues to any audience; and a laser-focused, almost obsessive, drive to push Bay restoration from theory to reality.

"He brought a lot of discipline to the Chesapeake Bay Foundation, even as a very young man," Semans says. "Will gets things done. He not only is a very good long-term planner, but he's a short-term, get-it-done person."

On February 9, 1982, CBF's Board of Trustees appointed Baker as Executive Director, following a six-month search during which Baker filled the role as acting. The choice of the disciplined, get-it-done youngster proved a prescient decision. EPA released its seminal Chesapeake Bay study the same year. The science was ready to be put to action. As Winchester remembers, it "opened up the floodgates." And Will Baker was ready.

Next >> Relentless—Part 2: A Movement Rises