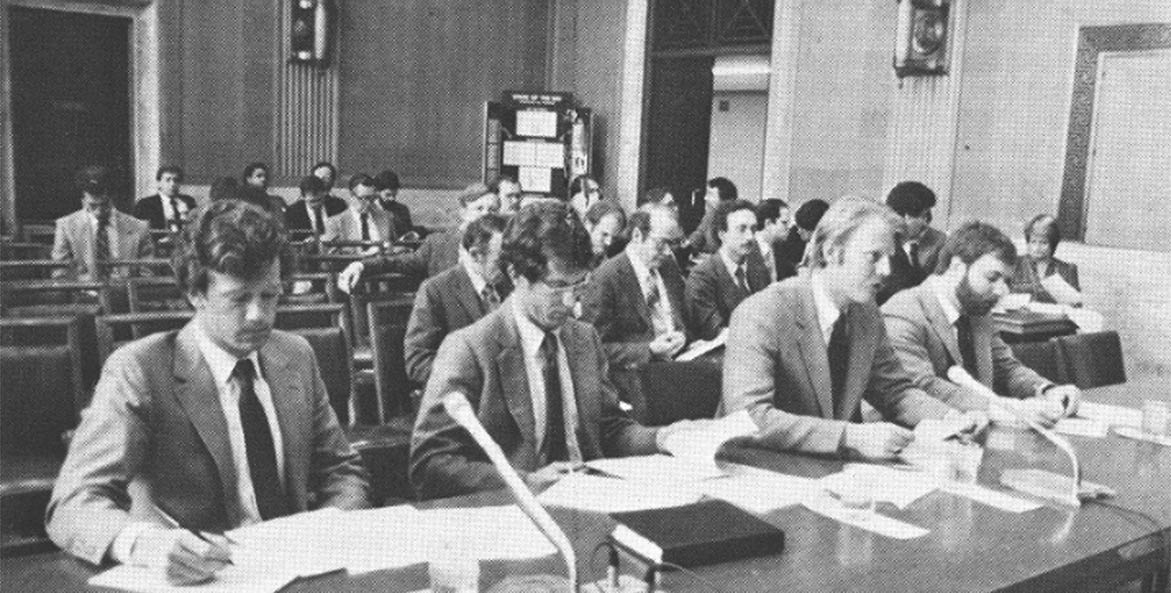 Will Baker and CBF staff testify at a U.S. Senate subcommittee hearing in 1983.

The 1982 Chesapeake Bay Study was the most comprehensive scientific assessment ever conducted of the Bay ecosystem—in fact, it was among the most comprehensive assessments of any coastal estuary in the world. It offered grim findings. The Bay was overfed with nutrients, toxic compounds concentrated in its harbors and seafood, and underwater Bay grasses—critical to the ecosystem's functioning—were at their lowest level of abundance in recorded history.

The Bay was dying. The question was: Would federal and state leaders do anything about it? Or would the nascent regional effort to address the Bay's ills fade into bureaucratic obscurity?

"Earlier this week the Bay foundation's outstanding director, William C. Baker, appeared before a U.S. Senate subcommittee to criticize the EPA for dragging its feet and ignoring some of its own alarming findings in recent bay studies," reads an editorial from The Capital newspaper on March 4, 1983. "The EPA's local office will dissolve once the program is finished this fall, and there is a real fear that the EPA will also abandon its interest in curing the bay's ills."

Completing the $30 million Bay study was not enough, Baker told the Senate. The federal government must not only preserve EPA's local presence on the Bay, but establish a dedicated office to coordinate and monitor restoration efforts in Maryland, Virginia, and Pennsylvania. It must also provide funding to get restoration efforts off the ground. Without such actions, the Bay's condition would surely worsen.

Privately, Baker and CBF staff worried that public interest in the Bay would lapse in the months between the Bay study's release and a December conference of state dignitaries slated to determine what—if any—action states would take. They were determined to keep the Bay front and center.

"One of Will's best talents is taking information, the scientific issues, whatever it is that he wants to get across to someone, and boiling it down to their language," says Mary Tod Winchester, who served as CBF's Vice President of Administration for more than four decades. "If you're a student, he knows how to say what's going to resonate with you. If you are a legislator, he understands what you're interested in and talks with you so that you understand the issue and what needs to be done."

The efforts paid off.

"A full house of 700 local officials and citizens groups anted up the $25 registration fee well before registration closed last month, and 400 more would-be participants were turned away," wrote The Washington Post when the conference kicked off December 7 (Baker's 30th birthday). "Like most recent Bay-related efforts, the conference is away and flying before it opens on the wings of public support."

Two days later, Maryland, Virginia, Pennsylvania, and the District of Columbia, together with EPA and the Chesapeake Bay Commission, signed the first-ever Chesapeake Bay Agreement committing to clean up the Bay together. The following month, President Ronald Reagan proclaimed in his State of the Union address that the government would begin "the long, necessary effort to clean up a productive recreational area and a special national resource—the Chesapeake Bay."

CBF saw rapid growth. Membership rose from 15,000 to 23,000 in 1984 alone. Its programs expanded to include grassroots advocacy, an initiative that garnered over 1,000 advocates for the Bay in the first two months.

"Will had an extraordinary vision. He wanted excellence and really believed in working round the clock. There was a culture of work hard, play hard," says Ann Swanson. Now Executive Director of the Chesapeake Bay Commission, Swanson at the time was a recent college graduate and CBF's first grassroots coordinator. "It was really important because for people like Will or like me, Chesapeake Bay restoration became part of your life, not just your job. It was embedded in your passion."

The 1980s and 90s brought huge strides for the Bay restoration effort. A revised 1987 Bay Agreement set the first numeric targets for reducing nitrogen and phosphorus pollution. A moratorium on striped bass fishing in Maryland and Virginia helped reverse the decline of the Bay's iconic fish. Bay jurisdictions banned phosphates and adopted legislation requiring farmers to develop plans for managing manure and fertilizers. CBF's award-winning environmental education programs expanded in Virginia and Pennsylvania, inspiring a new generation of Bay stewards across the watershed.

"It takes a person who's not willing to accept the way things are," says Winchester. "He knew all too well that if you don't rock the boat, you're not going to get to your goals."