Rumbling across the main stem of the Chesapeake Bay, the Patricia Campbell was carrying about 7 million juvenile oysters. Its captain, Karl Willey, was eyeing the GPS as the planting site in the Tred Avon River approached. Soon, a capable crew of deckhands and volunteers would be guiding the spat-on-shell oysters down the conveyor belt, toward the spreader, and into the murky waters below. After about an hour, the oysters were in their new home, cleaning and filtering the water around them.

For a boat that has traversed nearly every tributary in Maryland, the planting was just another day at the office in the vessel's lengthy career. But this year is special for the Patricia Campbell; the boat is marking a milestone—its 20th year of service.

What does it look like to add approximately 7 million spat on shell to the Tred Avon River? Check out this awesome time-lapse from CBF's oyster restoration vessel, the Patricia Campbell!

A marvel of a vessel when it was built in 2002 to accelerate CBF's restoration efforts, today the 60-by-19-foot Patricia Campbell is as seasoned as the deadrise crab boats it often passes on its way to oyster sanctuaries. But even today it remains innovative and unique.

Karl Willey, the first and current captain of the vessel, said he knows of one other boat on the Chesapeake—Future Harvest—that has similar features. Built by a Virginia oyster company it is smaller and used for aquaculture.

"One of my favorite things about my job on the Patricia Campbell is seeing the spat-on-shell hit the water because I know they're going to create oyster reefs and filter the water for years to come," said Willey.

That process begins at CBF's oyster restoration centers in Maryland or Virginia, where oyster larvae are added to oyster shells held in cages that are submerged in large holding tanks. Once the larvae stick to the shells, they become spat-on-shell. Then the cages are hoisted up by the Patricia Campbell's two-ton crane into a hopper on the boat. 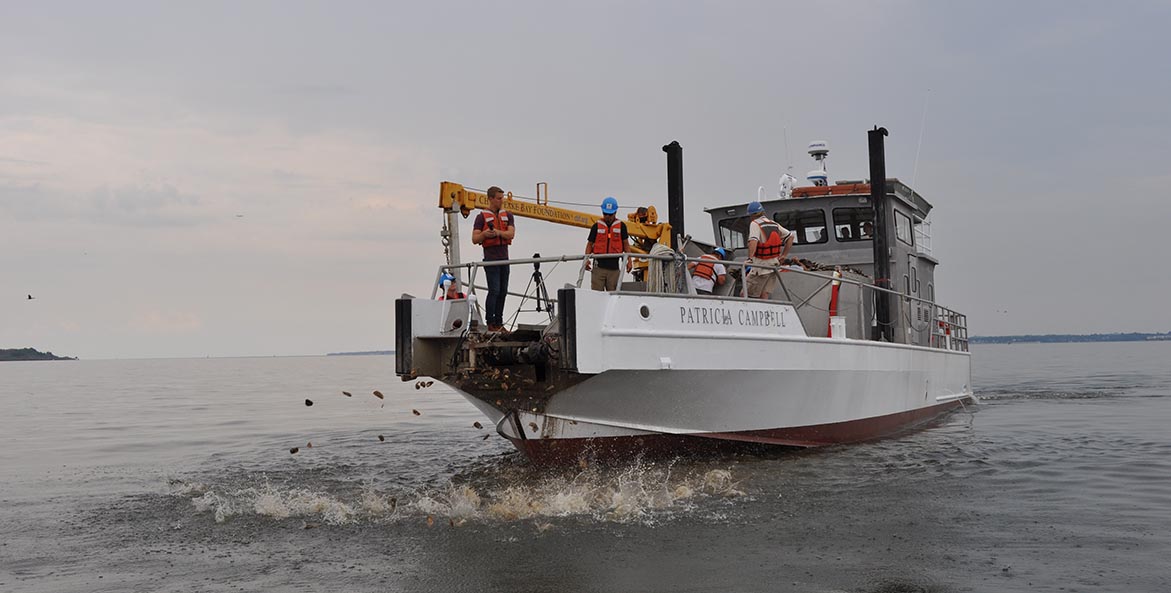 The Patricia Campbell plants oysters at the Campbell Memorial Reef outside of Baltimore Harbor on July 31, 2019.

One of the Patricia Campbell's unique features is its conveyor belt, which can rapidly transport oysters from the hopper to the spreader. The spreader then fans the oysters out over a reef using GPS coordinates to ensure oysters are added where needed. The boat also has an open floor plan, enabling the crew to catch any snags and oversee the planting process.

Former CBF Fisheries Director Bill Goldsborough thought up the design, and it was built by Midship Marine in Harvey, Louisiana. Longtime CBF Trustee Keith Campbell donated funds to build the Patricia Campbell, and it was named in honor of his wife.

In 2019, Campbell said the boat was inspired during a breakfast he had with Goldsborough and then-CBF President Will Baker. When Campbell mentioned his desire to get more oysters in the Bay, Baker asked Campbell for his support to build an oyster restoration vessel. Construction began soon after. 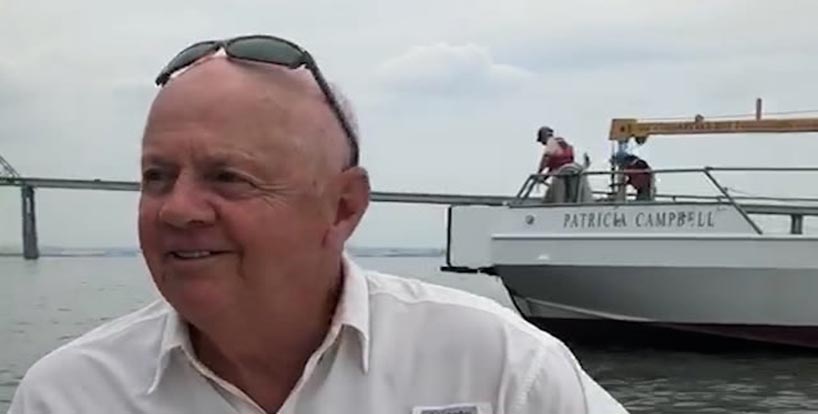 Since that fateful breakfast, the "PC," as it's known at CBF, has added more than 336 million oysters to the Chesapeake Bay, traveled more than 22,000 miles, and completed about 300 trips. It has also served as a centerpiece for a community of more than a hundred interns and volunteers who have worked as crew members, some of whom have gone on to do restoration and conservation work elsewhere.

Throughout its operation, the Patricia Campbell has distributed most of those oysters onto Bay bottom inside oyster sanctuaries. Before significant oyster sanctuaries were established in Maryland in 2010, the vessel was used to add oysters to aquaculture leases held by CBF around Annapolis and in the Magothy River. Since then, CBF partnered with the National Oceanic and Atmospheric Administration (NOAA) to plant millions of spat-on-shell on restoration reefs in Maryland's Little Choptank River, Harris Creek, and Tred Avon River.

The Patricia Campbell is also one of few vessels that can place oyster reef balls in the water for restoration. These three-dimensional concrete forms weigh about 300 pounds, and four at a time can be carefully lowered by the Patricia Campbell's crane. The PC has been used in reef ball projects to build fish habitat off Bill Burton Fishing Pier in Trappe, MD; add structure to an oyster sanctuary off the coast of Chesapeake Beach, MD; and as part of a research project to see if reef balls could help stabilize an eroding shoreline in Shady Side, Maryland.

Taken together, these planting efforts aim to stop the long-term decline of oysters in the Chesapeake Bay. Oysters throughout the Bay have declined to a fraction of their pre-industrial levels due to a combination of overharvesting, disease, and pollution. Yet, they're vitally important to the health of the ecosystem. Adult oysters can filter up to 50 gallons of water per day, and their reefs provide habitat to fish, crabs, and hundreds of bottom-dwelling organisms. The bivalves are a source of food for birds, cownose rays, and other animals, as well as an important part of the regional fishing industry.

So what's next for the Patricia Campbell? Karl Willey thinks the boat's future is bright. In 2019, the boat received new engines and updated hydraulic systems.

"That boat will continue to be a cornerstone of the Chesapeake Bay Foundation," Willey said. "She's got 1 billion oyster plantings in her. She's ready to keep saving the oysters in the Bay from Baltimore to Chesapeake Beach."

As for what type of boat innovation may be next for CBF, Paul Willey, who is now CBF's director of education operations, is working on designs for an all-electric deadrise education vessel that could serve as a symbol for clean and green boating around the watershed. 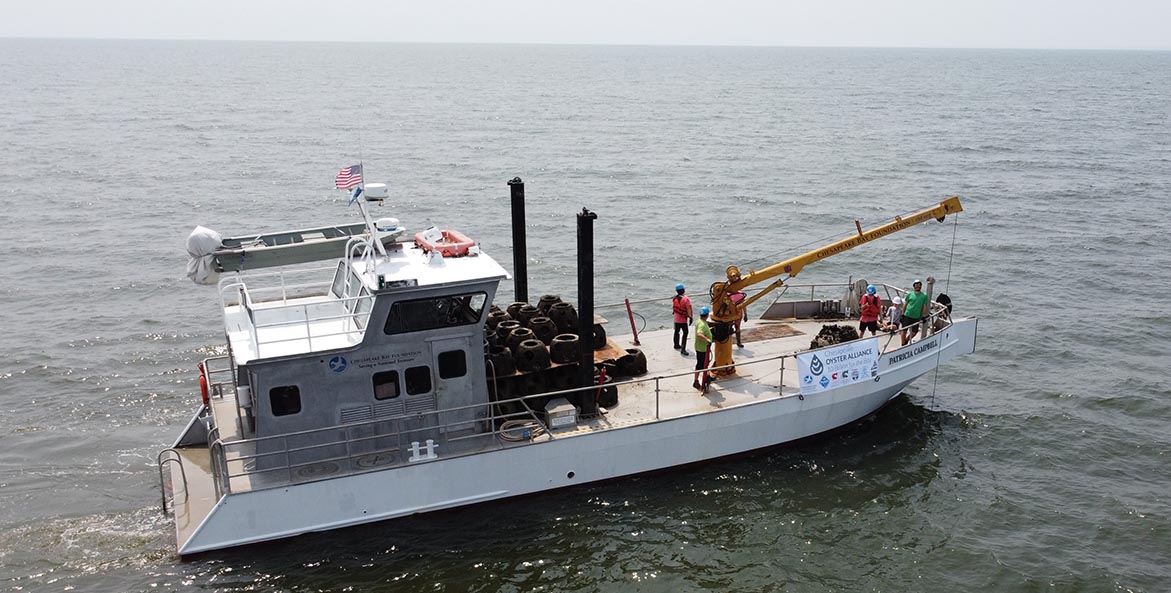 The Patricia Campbell uses its crane to plant oyster reef balls off the coast of Chesapeake Beach, Maryland, in July 2021.

The Patricia Campbell by the Numbers: