One 'Really Empowering' Trip to Richmond

What is it like as a high schooler to sit down with state senators and delegates in their offices in Richmond?

“I never really thought that at 18-years-old I’d be doing this,” said Jordyn Lewis, a CBF student leader and student at Kellam High School in Virginia Beach. “It felt really empowering. It felt like all the work I’ve been doing over the years and all the things I’ve learned are finally coming to fruition.”

CBF’s Student Leadership program offers exactly this kind of mentorship to high schoolers pursuing their passions. For months before her visit to Richmond, Jordyn worked with CBF Virginia Student Leadership Coordinator Rick Mittler to explore how advocacy and policy can lead to meaningful change. After following various bills and amendments throughout the legislative session, Jordyn and CBF arranged meetings with the offices of four legislators in a single morning.

Jordyn also is a student in the Environmental Studies Program, a Virginia Beach City Public Schools initiative where students learn in a classroom at CBF’s Brock Environmental Center and outside in nature. Environmental education is so essential for Jordyn that she traveled 100 miles from her home to advocate for state investment in environmental literacy from elected officials.

“Environmental education and literacy is super important to me. It’s the reason why I’m here today,” she said. “It’s shifted the way I view learning and made me excited to go out in the field.” 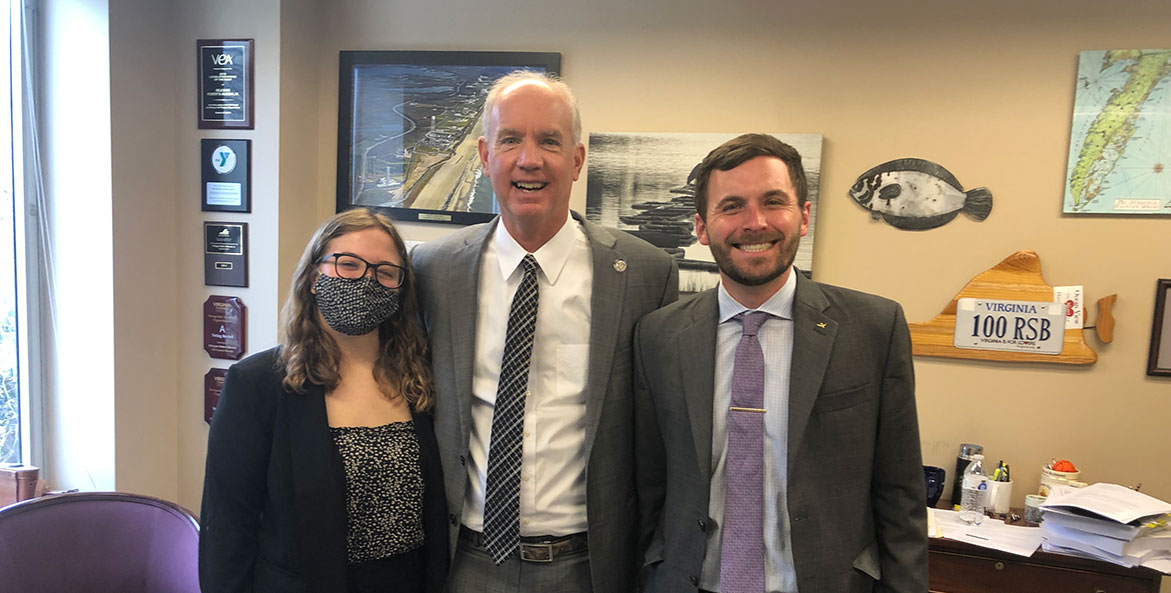 Jordyn hopes that increasing state investment in environmental literacy will mean more Virginia students can have those kinds of transformational experiences. On her March 1 trip to Richmond she met with Delegates Ken Plum, Rob Bloxom, Glenn Davis, and an aide for Senator Jen Kiggans.

“I was excited. I was nervous. I was scared . . . But after the first meeting you got adjusted to it,” Jordyn said. “The legislators were really open, they were asking me questions, they were engaged with me.”

The future looks bright. While legislators have not yet agreed to a final budget for the next two years, both the Virginia House and Senate budget proposals include additional funding for coordinating statewide environmental literacy efforts.

“CBF has been such a great connection to have. They helped me through the entire process,” Jordyn said. “We all have the opportunity to do this, you just need to reach out.”

Virginians: Join Jordyn and CBF by Speaking Up for Investments in Environmental Education
Take Action