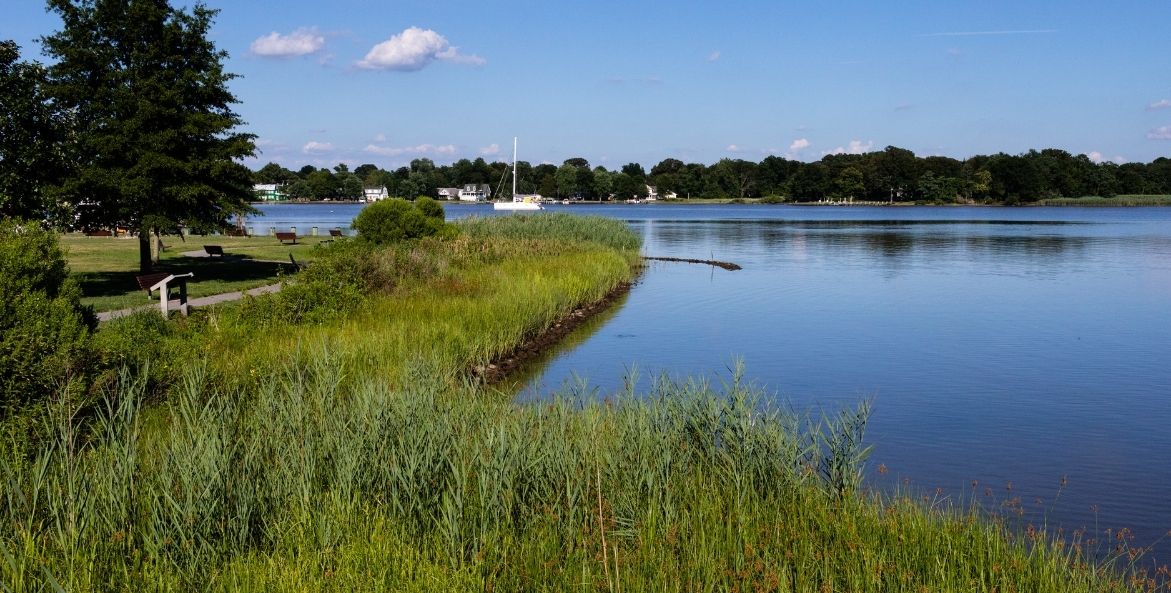 A living shoreline along the Chester River at Wilmer Park in Chestertown, Maryland.

The outline of the Chesapeake Bay is changing faster than it has at any point in recorded history, with climate change leading to more intense storms and sea level rise. As our region invests hundreds of millions of dollars in flood resilience, we must prioritize projects that also benefit Bay restoration.

How we treat our waterfronts is perhaps the most visible test case. Living shorelines of native plants incrementally absorb rising waters, reduce pollution by filtering runoff and create wildlife habitat. They are often more effective, and more cost-effective over the long run, than armoring shorelines with rocks, concrete or treated lumber.

These living shorelines are key to adapting to climate change and restoring the Bay. But after years of building hard barriers along waterways, changing mindsets is difficult. Now is the time to reevaluate our relationship with the Bay's ever-changing waterfront.

In mid-May, an unusual spring nor'easter battered Hampton Roads with days of relentless wind, pushing massive amounts of water into tidal waterways. Denise Maples was at her home along the north side of the Elizabeth River, watching as water rose above bulkheads at neighboring properties, inundating lawns and scouring soil from behind the structures.

It was a real test for her own waterfront. In 2019, she worked with the Elizabeth River Project to establish a living shoreline of native grasses, as well as an oyster reef just offshore, built specifically to break up the force of waves. A portion of this living shoreline lies in front of an older stretch of piled stone "riprap."

The storm's surge left just the tops of the native plants above the surface. But the real surprise came once the flooding receded. The water's powerful force had flipped a seemingly immovable large rock in the riprap. Remarkably, the seemingly delicate native grasses that bore the brunt of the water's force all stayed in place. Their roots remained firmly anchored into the soil, keeping her waterfront land from washing away.

"The natural flow of the water across the sand and grass is helping to maintain what God has put there for a purpose," Maples said. "When you start adding manmade products, you're not allowing nature to do what it's supposed to do."

Waging war with water is a losing battle. Bulkheads and riprap only work until a high tide or storm surge rises over them and starts to wash away soil, requiring costly repairs. A well-designed living shoreline, by contrast, grows and strengthens over time. In fact, bulkhead owners report four times the annual maintenance costs when compared with those of natural shorelines, according to a 2017 study published in the journal Marine Policy.

While Denise's property had long been shrinking, it is now gaining back land as the native plants trap sand washed in by the current. Wildlife abounds, from night herons and egrets to foxes and racoons that forage in the oyster reef at low tide.

That is one of the reasons that living shorelines are required by law, whenever feasible, in both Virginia and Maryland. Virginia, through its Conservation Assistance Program, even offers homeowner grants for installing living shorelines.

But waterfront homeowners may not realize the long-term benefits at first. When deciding on shoreline protection, property owners tend to choose hardened shorelines if that is what neighboring properties have, according to a survey of coastal property owners in North Carolina. The survey, published last year in the journal Conservation Science and Practice, showed that people tended to follow their neighbors' lead with bulkheads or riprap even if they believed that natural shorelines were more resilient and environmentally friendly.

A well-designed living shoreline can help turn the tide of public opinion. A decade ago, the Pines on the Severn community outside Annapolis had a failing bulkhead and severely eroding cliff face.

Resident Ellen Posten met considerable resistance when she first proposed a living shoreline. But that changed after the community completed the project in 2015.

"I cannot point to a single person who does not like the shoreline," Posten said. "We've really done very well. We've had no erosion. The plantings have flourished. People love going down there to spend time on the shoreline."

In the years since, the once-eroded area has actually grown as waves and currents deposit new soil. Now, other communities and homeowners looking to protect their waterfronts visit to see how beneficial a living shoreline can be.

When building resilience to climate change, working with nature will always win out in the long run. Living shorelines lead to a healthier Chesapeake Bay, less pollution and a more beautiful and resilient waterfront. Fortunately, like the marsh grasses along our waters, a new mindset is taking root.