Our wetlands protect the Bay, provide habitat, and mitigate climate change. Join with CBF to protect critical wetlands in the Chesapeake Watershed.
Your submission includes periodic e-mail updates from CBF. You may unsubscribe at any time by clicking "Unsubscribe" at the bottom of any e-mail you receive from us.

Pristine wetlands frame the mouth of the Nansemond River, a tributary of the James River near Suffolk, Virginia. Wetlands play an essential role supporting wildlife and a clean, healthy Chesapeake Bay.

Wetlands are a critical component to the protection and restoration of the Chesapeake Bay.

The Chesapeake Bay receives half of its water from the Atlantic Ocean and the other half from an intricate network of hundreds of thousands of miles of creeks, streams, and rivers and 1.5 million acres of wetlands.

Located where land meets water, wetlands—which include marshes, swamps, and bogs—are low-lying areas covered by water some or all of the time.

Once disregarded as worthless land, they are now recognized as critical to the protection and restoration of the Bay, its wildlife, and even adjacent lands.

There are two categories of wetlands found in the Chesapeake Bay watershed.

Tidal, also called coastal or estuarine, wetlands, are found along the shoreline of the Chesapeake Bay and its rivers. These areas fill with water when the tide rises.

Inland or non-tidal wetlands contain fresh water and make up 86 percent of the wetlands in the watershed. Their water levels are affected by precipitation and groundwater. Many are located on floodplains bordering streams, rivers, lakes, and ponds.

However, "ephemeral" or "intermittent" wetlands (also known as “Delmarva Potholes” and pocosins) are not adjacent to waterways. These wetlands cover more than 34,500 acres on the Eastern Shore of Maryland, Delaware, and Virginia. The waters for these wetlands often connect beneath the ground or through ditches to nearby streams and waterways, especially in rainy seasons.

Wetlands can be populated by grasses and other leafy, non-woody plants; woody shrubs; or forests. 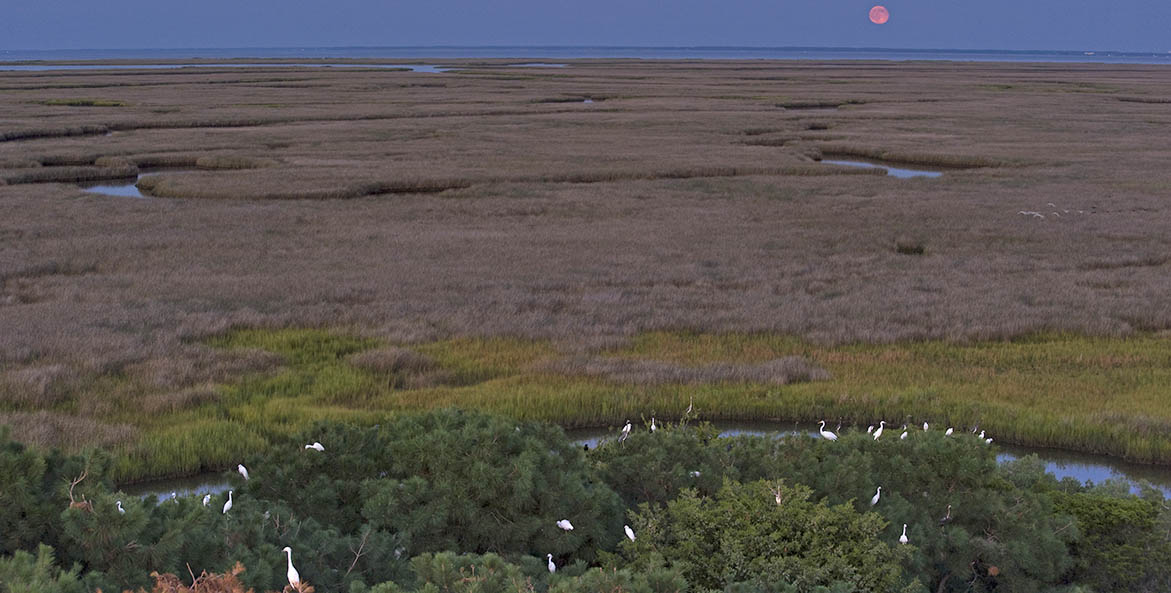 Wetlands like those pictured here at Martin National Wildlife Refuge in Maryland provide important habitat for egrets and other wildlife.

Why Are Wetlands Important?

Wetlands act as natural filters, protecting groundwater and downstream waters by trapping and treating pollutants, including phosphorus, nitrogen, and sediment. They are often referred to as the watershed’s kidneys, absorbing and cleansing polluted runoff through a complex system of physical, chemical, and biological processes  before it enters the Bay.

Tidal wetlands and inland wetlands absorb the energy of storm surges and overflow due to heavy rains. By absorbing the sudden influx of water, wetlands reduce flooding, erosion, and property damage during major storms.

Nontidal wetlands act as a sponge and absorb water after storm events. This water retention lets water slowly percolate and recharge groundwater aquifers. During dry periods, wetlands may discharge water providing baseflow to streams, which otherwise may run dry. This balance of water flow is critical for healthy watersheds.

The wide variety of plants, bushes, and trees that grow in wetlands bind the soil, preventing extensive erosion and controlling sediment. In addition, the shoots of wetlands vegetation slow down the flow of water, allowing fine sediment particles to settle, building soil elevation over time.

Wetlands provide some of the most productive habitat for widely diverse wildlife. Their rich vegetation provides food, shelter, spawning, and nursery areas for fish and shellfish; wintering grounds for migrating waterfowl; and shelter and food for amphibians, reptiles, mammals, and birds.

In the U.S., it is estimated that 90 percent of all recreational fish and shellfish harvested and 75 percent of those commercially harvested depend on wetlands for food or habitat.  In the Chesapeake that includes major recreational and commercial fisheries like Atlantic menhaden, rockfish, herring, shad, and bass.

One in ten of the Chesapeake region’s endangered species rely on wetlands for survival.

Wetlands can store 50 times more carbon than rain forests, helping keep this climate-change contributing gas out of the atmosphere. They trap high-carbon detritus, such as leaves, animal waste, and other debris below the water’s surface.  And the flooding and erosion control functions of wetlands can aid in reducing the impacts of climate change.

However, as mentioned below, wetlands are also vulnerable to climate change. 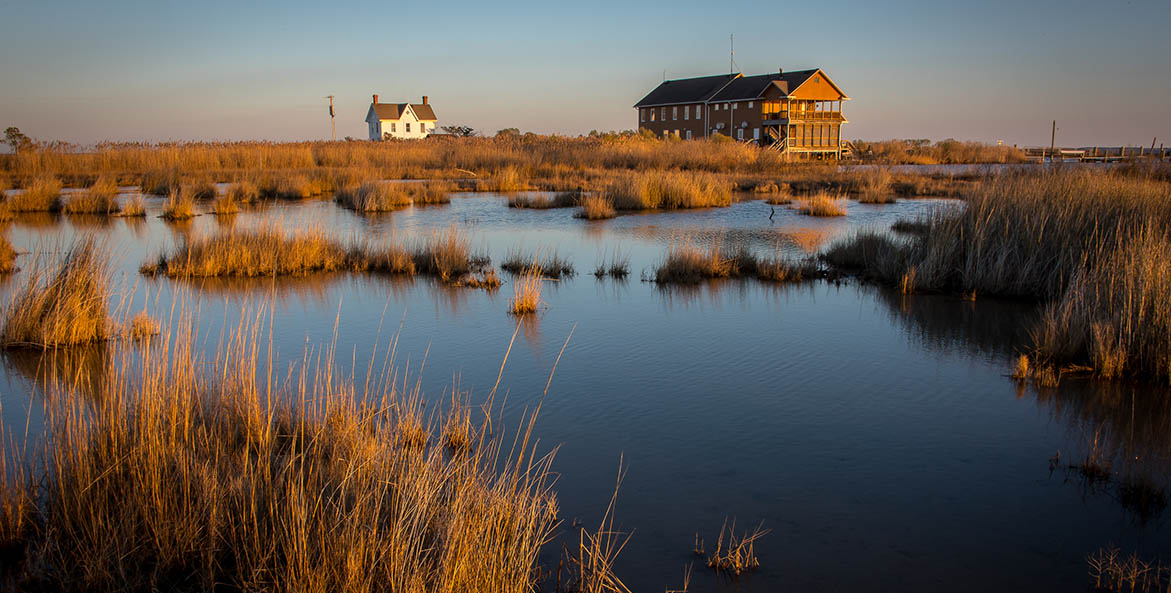 Large swathes of tidal wetlands could be lost to sea-level rise by 2100.

What Are the Threats to Wetlands?

In 2015, the U.S. Environmental Protection Agency (EPA) finalized the Clean Water Rule, defining "Waters of the United States" (WOTUS) in a way that provided clarity about what types of wetlands require Section 402 and Section 404 Clean Water Act permits, which are essential to Bay restoration.

Unfortunately, in 2020, the Trump administration repealed the 2015 rule and replaced it with a much narrower rule. That rule excluded ephemeral or intermittent wetlands that contain water only during or in response to heavy rains or snow, groundwater, and most roadside or farm ditches. It also left out waters and wetlands that cross state boarders from federal protection. If left unprotected, these areas could be destroyed by development.

The loss of such wetlands would both impact water quality and exacerbate the chronic flooding that disproportionately hurts socially disadvantaged communities.

The Biden administration is working to reinstate the pre-2015 WOTUS regulations and then develop a new definition of WOTUS that better protects our nation's vital water resources.

Invasive, nonnative plants and animals threaten native wetland species by crowding them out or establishing themselves more quickly or otherwise disrupting natives’ ability to thrive.

Nutria, a voracious, semi-aquatic rodent, have had a devastating impact on wetlands since their introduction to the region in the 1940s. As with most invasive species, they have no natural predators. Not only do nutria eat the roots, rhizomes, tubers, and young shoots of marsh plants, they also  cause great damage to the marsh “root mat," causing erosion and other damage.  They destroyed more than 7,000 acres of marshland in Blackwater National Wildlife Refuge before being eliminated from Maryland. However, Virginia’s  efforts to eradicate the South American rodent continue.

A number of factors caused by climate change are expected to impact wetlands. Changes in precipitation and temperature could alter habitability. In areas where development prevents tidal wetlands from shifting inland with sea level rise, they may disappear as water levels become too deep for plants. Freshwater wetlands could be affected by encroaching saltwater. All these factors affect wetlands’ critical roles for water quality, fisheries, and habitat.

Maryland’s Blackwater National Wildlife refuge, a crown jewel of the Chesapeake, could be largely underwater by 2100 due to a combination of sea-level rise and land subsidence, resulting in dramatic habitat losses. That includes a loss of more than 90 percent of its tidal fresh marsh, tidal swamp, and brackish marsh.

According to a 2021 report by researchers with the research nonprofit Climate Central, Virginia could lose 42 percent of its tidal wetlands by 2100.

Use Climate Central's interactive Coastal Risk Screening Tool to explore how sea level rise, coastal development, and maximum net vertical growth rates impact the resilience of U.S. coastal wetlands with the Coastal Wetlands in 2100 with Full Conservation map or see what changes are expected for wetlands in your county with the Percent Change in Coastal Wetlands Area by 2100 map.

What CBF Is Doing to Protect Wetlands

CBF actively opposed efforts to repeal and replace the 2015 Clean Water Rule and continues to engage with EPA  on efforts to reinstate the pre-2015 definition of WOTUS with updates to reflect Supreme Court precedent. It is critical that the definition of WOTUS include non-tidal wetlands and ephemeral and intermittent streams that make the Chesapeake Bay watershed unique.

How YOU Can Help Protect Wetlands

Here are eight things you can do to help protect wetlands.