Slowing the Flow: Miles of Streams Renewed in Fairfax County 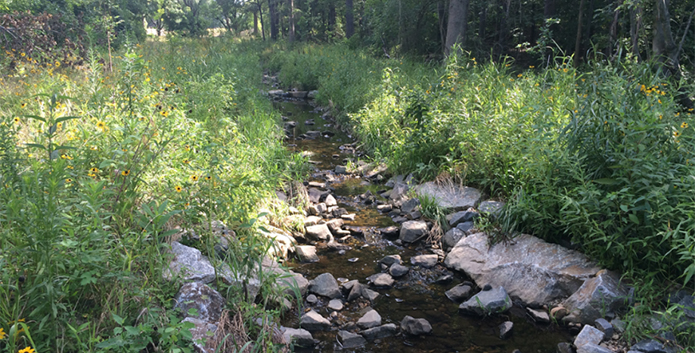 Given that more than one million people call Fairfax County home, there are plenty of homes, roads, and parking lots in this suburban Northern Virginia county. Rain washes pollution off all of these hard surfaces during storms, creating polluted runoff that fills streams that flow to the Potomac River.

Fortunately, Fairfax County has been a leader in Virginia when it comes to tackling the polluted runoff problem, thanks in part to 13 different grants it has received under the Stormwater Local Assistance Fund (SLAF). Altogether, these projects are restoring more than three miles of stream channel and converting three dry stormwater ponds into wetlands.

The grants have allowed Fairfax County to tackle many stream restorations that would have otherwise been put on hold, according to Emma Gutzler of the County's Stormwater Planning Division. With 12 of the projects now complete, the County is seeing results. Recent efforts at Wakefield Park and the Banks Neighborhood Park are just two examples of successful SLAF-funded projects in Fairfax County.

Raising a Stream at Wakefield Park

Right alongside the ever-present traffic on the Capital Beltway, Accotink Creek flows through a concrete culvert under the highway and enters Wakefield Park, a beloved popular spot for locals. But until recently, the stream was in bad shape. The force of the heavy runoff from all of the development upstream wreaked havoc, scouring a deep stream channel through the park. This led to steep, eroding, streambanks with undercut trees in danger of falling over.

But SLAF-funded restoration efforts resulted in radical improvements. The deep channels were filled with soil, raising the streambed and reconnecting it with the original forested floodplain. Right in front of the culvert, a series of rocky pools now slow down the water where it is needed most to prevent erosion. "Because of this culvert that we have, the water is going to be flying," said Jason Beeler of contractor Wetland Studies and Solutions. "When it hits the pools, it has a chance to spin around in circles. The roughness of the bottom of the pool and the sides will be able to dissipate its energy."

The raised streambanks were replanted with native plants and trees. Now these areas are developing into wetlands and vernal pools, which not only help filter out pollutants, but also provide homes and breeding areas for wildlife like native frogs.

People who recreate in Wakefield Park are also seeing the benefits. Officials planning the restoration sought feedback from local hikers, joggers, and mountain bikers who use the park. As part of the project, they installed a new bridge across the stream for hikers and runners. For mountain bikers, in two different places a series of large flat boulders cross the stream.

"The completion of the Stream Restoration Projects provided both an aesthetically pleasing and natural environment as well as functional stream crossings for all trail users to enjoy," said Mid-Atlantic Off-Road Enthusiasts President Ernie Rodriguez, who heads the mountain biking club that gave input on the project. "The trails within Wakefield Park provide great opportunities for our communities to enjoy outdoor recreation and to become involved with environmental responsibility."

All in all, about 2,700 linear feet of stream channel was restored within Wakefield Park along two tributary streams. The project began construction in October 2015 and was largely completed in August 2016.

Returning to Nature on the Banks Neighborhood Park

Before the project began.

Just a few years ago, it would have been easy to overlook the stream flowing through the small park in southern Fairfax County known as the Banks Neighborhood Park. That's because about 600 feet of the waterway was trapped in deteriorating pipes underground and channels lined with rip rap and concrete. Further downstream within the project's reach, heavily eroded streambanks transported excess sediment downstream and exposed a water line. It wasn't the prettiest sight.

But since late 2014, the stream has been returned to a more natural state. The pipe and concrete have been removed along 600 feet of stream, and 500 feet of heavily eroded stream channel has been restored. The project began construction in February 2014 and was completed in November 2014

After the project was completed.

Lush grasses and vibrant Black-eyed Susan flowers now brighten up the streamside. Altogether, about 450 native trees and over 1,700 shrubs were planted alongside the waterway. These plants help slow down runoff and filter out pollution. What's more, locals are observing songbird species that they hadn't ever seen before in the park.

The Wakefield Park and Banks Neighborhood Park projects have made a big difference to the health of local waterways. They are just two of the 13 SLAF projects Fairfax County has implemented in recent years, making it a model for what can be done with state support for efforts by localities to reduce polluted runoff.

Stay tuned for more stories of how innovative projects like these can help Virginia stop harmful polluted runoff from entering our rivers, streams, and Bay!