This Week in the Watershed: Flipping the Script 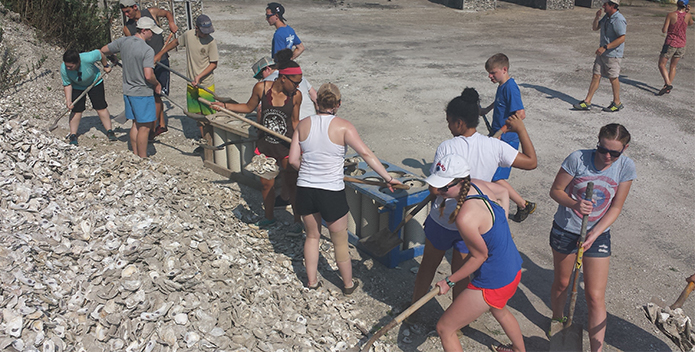 It was only 8:00 in the morning, but already the sweat was dripping from my brow. A little over a dozen high-school students were mingling about their beach campground, preparing for another day of hands-on Bay education. A scene just like this was taking place at four other locations throughout the watershed, as this week, CBF gathered student leaders to embark on a week journey to explore their environment, communities, and connection to clean water.

When an anniversary or milestone approaches, the natural inclination is often to reflect on the past. As CBF celebrates its 50th anniversary, we're flipping the script—what better way to celebrate than to engage with the next generation and hear their thoughts on what it will take to save the Bay.

Those students eventually made their way over from their beach camp to the CBF education boat, Marguerite, with a destination of CBF's Maryland Oyster Restoration Center. The students listened attentively to a tour of the center and bagged dozens of bags of oyster shells—all while in sweltering conditions. As these students were pitching in to restore the Bay's native oyster population, other groups of students were examining the water quality in the Potomac River; exploring salt marshes on an island in the middle of the Bay; and touring a farm, studying the connection between agriculture and clean water.

In CBF's 50 years, the Bay's health has improved, but it is far from saved. Tomorrow, all these students will gather at CBF's headquarters in Annapolis and present their findings from a week in the field. While the Bay is facing many threats, if its fate is left in the hands of these dedicated, passionate, and Bay-loving student leaders, this national treasure will persist and thrive for many future generations.

This Week in the Watershed: Park Transformation, Fishing Dead Zones, and Inspiring Students