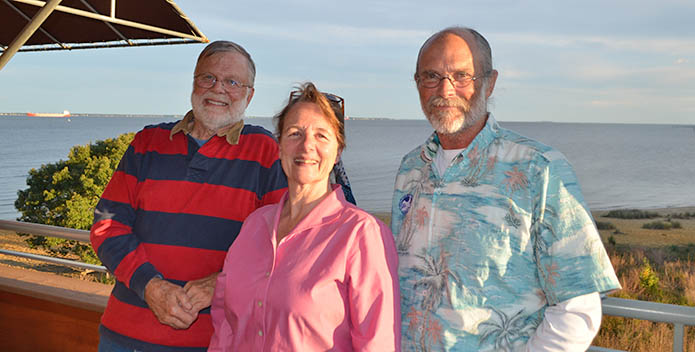 On a recent Indian summer day in late October, friends, colleagues, and CBF legends Mary Tod Winchester (Vice President for Administration), John Page Williams (Senior Naturalist), and Bill Goldsborough (former Director of Fisheries, now retired) got together to reflect on the Bay, CBF, and their lives’ work—all closely, even inextricably linked. Between the three of them, they have devoted more than a century to the mission of saving the Bay.

It was a bittersweet gathering as Winchester, one of the organization’s very first employees and often referred to as “the mother of CBF,” was set to leave the Foundation in just a few weeks, following in Goldsborough’s footsteps who had retired one year prior. Still, despite the inevitable departures, these three then, now, and always will be intrinsically connected to the Bay—perhaps more than anyone else I know—as made clear in the intimate conversation that follows. They've got Bay blood.

John Page Williams (JP)
I’ve been thinking about this . . . each of us is deeply grounded in a sense of place. And it’s a range of places: Galesville, Eastern Shore, Smith Island. I think the two rivers that really anchored me are the lower Potomac on the Northern Neck and the Chickahominy. And because I’ve lived on it for the last 44 years, the Severn River . . . I learn something new every day on that river. Every one of us is fascinated, deeply hooked by place.

Mary Tod Winchester (MT)
It’s about roots. I’m sixth generation in Galesville, Maryland, [coming from a] boat-building family. We’re connected to the Bay in many different ways, whether it was designing/building boats, messing around in boats, messing around in the marshes, in the rivers, in the creeks, in sailboats. I grew up sailboat racing, and my family still owns our boatyard that started in 1865. It’s in my blood.

And CBF . . . just look what we've done. Look what we're doing. We're really making a difference. And I think that's probably one of the things I remind myself when I have a tough day, when it's frustrating. I am so very lucky I've had a job for all these years where I feel we're really making a difference. And, I’ve raised a family, two sons, while doing this job. They see how important it is to really care about enjoying your job and working to make a difference.

Bill Goldsborough (BG)
The thing that all of us have in common is a love for the Chesapeake. [It’s] been instilled in us from our lives on it. We saw it's decline and wanted to turn that around and bring it back to a healthy state because we understand the diverse benefits of it—the cultural, the economic, even the spiritual benefits. To be paid to do fulfilling work like that is the more amazing piece of it.

I, like Mary Tod, first heard about CBF when I saw the Save the Bay bumper sticker. It was the mid ’70s when I saw it driving across the Bay Bridge. I grew up on the Eastern Shore, fishing on the Bay with my dad. By that time in the mid ’70s the striped bass decline was in full force, and that was what was stimulating me. I had done a study of it in college in the early ’70s, and I was trying to figure out what I was going to do with my life after college, and then I saw that bumper sticker.

JP
I haven't had a job in 44 years. The range of challenges [at CBF] has been absolutely fascinating. Way back in the ’70s when I was running field trips with the canoe fleet [I realized] that the absolute best education process for me to learn is teaching. There's nothing that'll make you learn faster than having a bunch of eighth graders on a chilly morning looking at you, expecting you to say something useful about the Patuxent River at Jug Bay or King's Creek on the Choptank or Gordon’s Creek on the Chickahominy. We learned fast how all the pieces of the Bay fit together, at least at some level. And we learned the seasons, day by day. And that is such a rich fabric. I'm still here because it'll get into your soul, as simple as that.

Tell me about the early days of CBF.

MT
There were a group of sailors out of Baltimore that were really frustrated with how they could actually see how the Bay's health was continuing to decline. And they really wanted to make a difference.

JP
They sailed through a fish kill on an Oxford race.

MT
This was back in the early ’60s, and they were trying to figure out how to make a difference. CBF was incorporated in 1966, but it really didn’t get going until 1967. That was when the Bay was starting to lose its grasses, becoming dirtier. I can remember my mother saying you can only swim for an hour. It’s too dirty.

BG
I think the first Bay conference was in 1968, but that was just in Maryland at that point. And then Senator Mathias did his famous trip around the Bay in the mid '70s, meeting watermen, talking to people, bringing attention to the problems. And that led to the seven-year EPA study, which made it clear that the Bay's condition was serious and wasn't going to get better unless we really took action.

What were some of the signs that the Bay was dying?

BG
Grasses died off. Water quality declined. A dead zone had established itself. High turbidity. Toxics were an issue.

JP
That was when the word eutrophic started getting thrown around.

MT
You want to explain what eutrophic means? [she laughs]

JP
I was going to defer to Bill. [more laughter]

BG
It just means an aged system really. An estuary will age over tens of thousands of years, and it's a slow process normally of being filled in by sediment and concentrated nutrients from plant growth and so forth. Eventually it can be turned into a wetland. After that study came out it, it became clear that the aging process had dramatically sped up in the Chesapeake due to pollution.

And what if we had done nothing? Would the Bay have died?

BG
The Bay or any system would never really "die," it would just change. It might die according to our frame of reference of what we all remember of the Bay having clear water, abundant grasses and fish, and so forth. But it would still be alive, it would just be mostly bacteria and algae and pea-soup-like water. It would not have the complex ecosystem, the food web, the diversity of life that we value and love.

JP
Mother nature still makes the rules, and she always wins. And a eutrophic system may very well have more biomass in it. It's just not the biomass that we have come to find beneficial for us. The system that we see now is much more heavily fertilized by nitrogen and phosphorous than what Capt. John Smith saw. Smith saw a system that had had a chance to stabilize over a long period of time with a really diverse group of plants and animals that built themselves into a complex web that shifted with seasonal changes. And we started pulling pieces out of it without really understanding how that would affect the whole web. But what we're really trying to do now, finally, is understand how when you take one piece out of here or if we suppress one piece by a certain amount what does the rest of the web do?

How has CBF been successful?

MT
Practice what we preach. When I think about it, in all the years we've worked at this, it's always been CBF pushing the boundaries and finding better ways to educate and practice what we preach. With our Merrill Center headquarters in Annapolis we were able to practice what we preach by building one of the first holistic sustainable buildings in the world. And we were doing it because it was the right thing to do. We wanted to show others that it could be done. Little did we know how much of an impact it would have . . . It's now considered one of 52 game-changing buildings in the world since 1849. WOW.

JP
[One of CBF’s founders] Arthur Sherwood's idea was the place to teach people about the Bay is on it. It was such a simple idea, and once we really started to work with it and always in the context of making it a useful resource for classroom teachers that would dovetail into what they were doing in their curriculum, it took off. There was magic out there on those education experiences.

BG
I think the concept that's driven us from the beginning is that you need to have both a good scientific basis and you have to have good on-the-water understanding, which comes from watermen and charter boat captains and recreational fishermen. A lot of us got our inspiration for working for CBF from growing up fishing on the Bay. So you've got to have that on-the-water knowledge and got to have good science, and then blending those things into policy is the challenge.

JP
1949. Sitting in a wooden skiff just outside the mouth of the Yeocomico off Sandy Point near the lower Potomac. Catching spot off an oyster reef and taking them in and eating them for supper or breakfast. I was six.

MT
Two and a half. Racing a sailboat with my dad. They started us early. Put us in the cockpit to get that feel of the water . . . that's my first memory of being on the river and being a part of it. You feel the wind and the smells of the river . . . It was just part of our lives, messing around in the boatyard, always down at the boatyard, on or in the river.

BG
It's funny how wooden boats are a common theme for all of us. It is for me, too. My earliest memories are all fishing experiences with my dad on our old wooden workboat, which was named the Mermaid. We'd go, just me and him, and sleep on the boat Friday night, and before dawn we were out running down Eastern Bay. There were grass beds in 12 feet of water in those days. We'd stop at a clammer, and get a bushel of soft shell clams for three or four dollars, and I'd shuck some for bait and grind up some for chum right there on the boat. Me and my dad had 100-rockfish days back then.