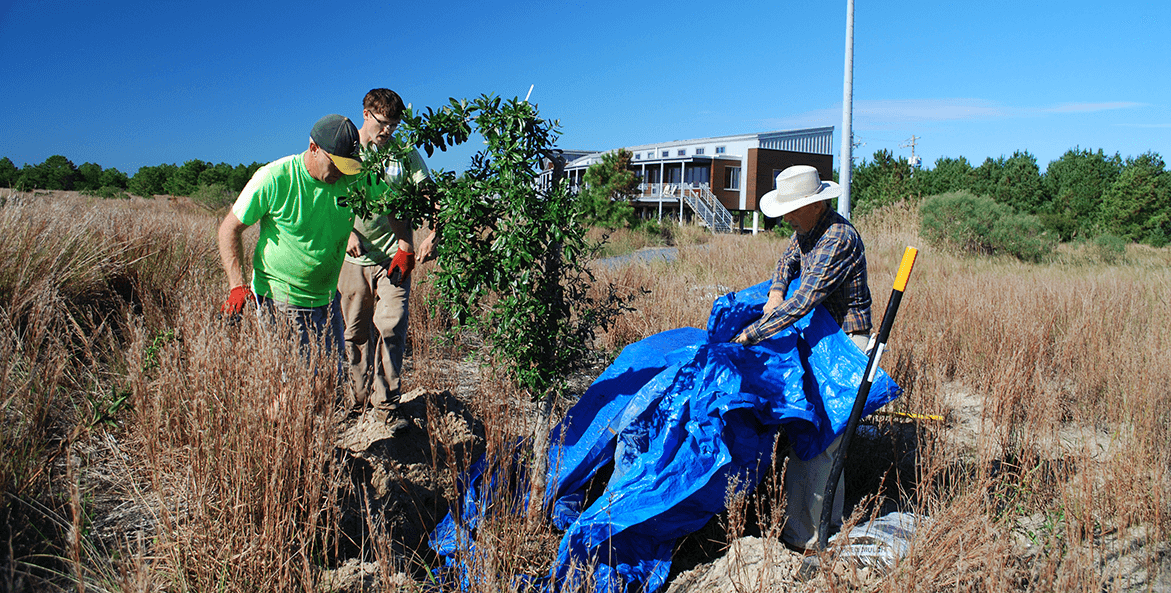 A sapling from the Emancipation Oak is planted in front of the Brock Environmental Center.

On the morning of Saturday November 4, 2017, youth from a Virginia Beach 4-H club planted 12 saplings from the historic Emancipation Oak at the Chesapeake Bay Foundation's Brock Environmental Center in Virginia Beach. The Emancipation Oak is an ancient sprawling live oak tree on the grounds of Hampton University. During the Civil War, newly freed slaves were educated in the shade of its branches, and it was the site of the first reading of the Emancipation Proclamation in the South.

Ten years ago, Hampton nurseryman Eddie Anderson planted a batch of acorns from the Emancipation Oak. In 2010 one of the seedlings was given to President Barack Obama for planting on the White House grounds. The remaining 12 offspring have since been growing at Anderson's house. They now range from five to nine feet tall.

Youth from the 4-H Guardians of the Planet of Virginia Beach joined Anderson in planting these trees Saturday morning across the Brock Center grounds. There they will provide habitat for wildlife and a significant link to Virginia history for visitors. With their strong wood, low spreading profile, and tolerance of salt and sandy conditions, these native live oaks are perfectly adapted to the local environment.

Another one of Anderson's Emancipation Oak saplings was planted on Sunday, Nov. 5, in the City of Hampton in a spot overlooking Elizabeth Lake at the head of the Hampton River, where the Chesapeake Bay Foundation (CBF) has worked with local residents to construct an oyster reef. Members of the community came together to plant the sapling, which was rowed in a boat to the site from Anderson's home. Claire Neubert, a CBF Clean Water Captain who lives nearby, says the sapling is now a part of the community. "I am full of hope for the continuing history of this lovely tree," she said.