This Week in the Watershed: Bunker Battle Continues 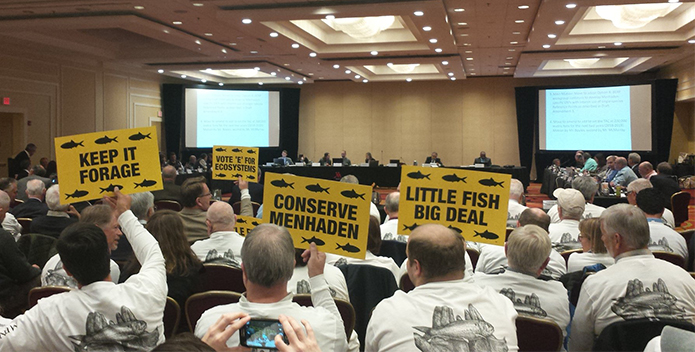 Menhaden advocates came out in force to the ASMFC meeting in Baltimore, November 13, 2017.

The message was loud, clear, and nearly unanimous. Over the past several months, the Atlantic States Marine Fisheries Commission (ASMFC) gathered comments on the future management of menhaden. More than 127,000 individuals submitted comments, and when they were tallied, a resounding 99.6 percent were in support of an ecosystem-based approach to menhaden management.

When the ASMFC meeting commenced on Monday in Baltimore, menhaden advocates were optimistic. The hotel ballroom was abuzz, packed with passionate volunteers voicing their support for ecosystem-based management, including many who traveled great distances from across the watershed. But despite this overwhelming public outcry, the ASMFC commissioners voted to continue with the status quo.

While extremely disappointing, a significant victory for the Bay was achieved near the end of the two-day meeting, when the Commission voted to decrease the Chesapeake Bay reduction fishery cap by 41.5 percent. CBF's Maryland Fisheries Scientist Allison Colden successfully argued that because of ongoing ecological concerns the Bay's menhaden need further protection with a reduction in the fishery cap.

Our work isn't done yet. Although the ASMFC commission members voted to delay the ecosystem-based approach to managing "the most important fish in the sea," they voiced broad support for adopting this management approach when their analysis is complete in two years. Rest assured, with you by our side, we're going to hold them to it!

This Week in the Watershed: Menhaden Rollercoaster, Hellbender Status, and a Bay Poison Pill