We're Half Way There: Glenn and Arlene Reid 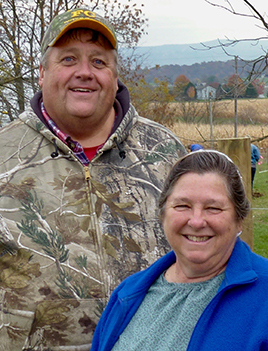 The Reid's farm is in the Linville Creek Watershed, which is on the state's impaired waters list.

Broadway, VA: The newborn calf was in trouble. It was born on a steep hillside, and every time the calf would try to get up his mother would nudge him and knock him down. He eventually rolled down the hill into a muddy area of a stream. And there he was, stuck up to his neck until Glenn and Arlene Reid rescued him. “It took us over an hour to get the calf out of the muck,” said Glenn.

The Reids own and operate a cow-calf operation; they also raise vegetables, flowers, and herbs for local markets in their greenhouses. After the stream and muddy area almost took the life of one of their calves, they decided to make a change. The Reids enrolled into the Conservation Reserve Enhancement Program to fence their cattle out of the spring that created the muddy area. The program helped install fencing, a hardened crossing, and several waterers as part of a rotational grazing system. Trees were also planted along their stream.

“It is so easy now to move the herd, I can do it myself,” Arlene says. “We used to have lots of help moving the cows when the children were young, but they are all in school now. So, this rotational grazing has really helped us.”

Keeping livestock out of calving risk areas and ease of herd movement throughout the farm are two reasons farmers enroll in programs that keep livestock out of springs, ponds, streams, and rivers.

The Reid farm is in the Linville Creek Watershed, which is on the state’s impaired waters list.

“We didn’t know the creek was polluted until we attended a meeting about it,” Glenn recounted. Not long after the meeting, the Reids met with members of the local conservation team to develop a plan.

“We enjoyed working with the team, they listened to our concerns, and together we came up with a system that works for us and we feel good that the water leaving our farm is a lot cleaner than it used to be,” Glenn said.