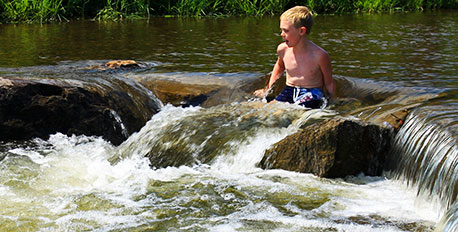 Clean water is crucial for the health of our children.

With $200,000 in NFWF funds and matching money, Wrightsville Borough will reduce polluted runoff by adding a large stormwater retention basin within Riverfront Park on the Lower Susquehanna.

"What makes NFWF funding so valuable is that it can be used for matching funds and is easily matchable," says Ben Craddock, president of Lancaster Civil Engineering Company, that worked on the Wrightsville Borough project. "We didn't find anyone who didn't want to match with NFWF."

With a NFWF grant of over $200,000 and matching funds, York County's plan to create a stormwater authority will take an important step forward, advancing to development of an actual business plan. The authority would implement cost-effective regional stormwater solutions that address problems like nuisance flooding and local stream pollution. It can also produce more fishing opportunities and cleaner sources of drinking water.

Felicia Dell, director of the York County Planning Commission, said, "Without NFWF, we wouldn't be able to advance the idea of a stormwater authority past the feasibility stage to developing an actual business plan."

Financial and technical assistance from NFWF supports cost-effective and creative solutions that clean and restore polluted rivers and streams in Pennsylvania and the Bay states. Investments like these come through NFWF's Chesapeake Bay Stewardship Fund.

Projects in Pennsylvania that benefit from NFWF grants are too numerous to list. Here are a few more:

As Pennsylvania considers yet another budget that does not adequately fund pollution reduction efforts, federal partnerships like those with NFWF and the Chesapeake Bay Program are as important as ever.

Roughly 19,000 miles of Commonwealth rivers and streams are harmed by pollution. NFWF grants help clean them up, improve farm economies, and protect human health and welfare.