This Month on the Bay: Getting Outside in December 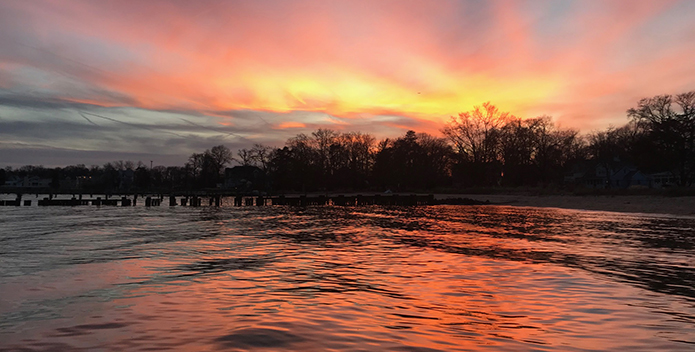 A piece of beach in front of the Chesapeake Bay Foundation's headquarters where, in late Fall, an East wind pushes waves onto a sand bar.

There’s a piece of beach in front of the Chesapeake Bay Foundation's headquarters where an East wind pushes waves onto a sand bar. In the Fall of the year, those waves concentrate baitfish. As long as the water temperature is above forty-five degrees, rockfish of varying sizes come into those shallows around dusk to feed on the wind-driven bait.

They seldom announce their presence with tail slaps or splashes. They prefer enough wind to build whitecaps, and cloudy skies. Rain helps even more. It's not a particularly comfortable scene for humans, especially when there is a warm office nearby with comfortable chairs and a good coffee pot. There's always a good excuse to stay indoors on these evenings.

But for anyone who wants first-hand experience in the wild heart of the Chesapeake ecosystem, it's a magic opportunity. Yes, it requires effort, but the reward can be memorable. Thus we have a saying at CBF: There's no such thing as bad weather, only bad clothes.

Case in point: the other evening, the water temperature was right on 50 degrees, according to NOAA's Annapolis Buoy, chilly enough to feel through my waders and khaki pants, with fifteen knots of wind pushing whitecaps onto the bar from the southeast. But the evening light was lovely, so I roused from my desk, put on a parka and the waders, and went out.

As I walked down the beach, a great blue heron complained about intrusions on its feeding territory and flew out to patrol the rocky offshore breakwaters in front of the Merrill Center. Lights twinkled across the water from the ships lying at anchor south of the Bay Bridge, waiting for clearance to go into Baltimore.

Were there fish there? The answer came immediately: a fat, eighteen-inch rockfish took my jig when it splashed down. A spirited pair of runs over a couple of minutes brought the fish to hand, so I could grab the jig's head and invert the barbless hook to set the (undersized) fish free without lifting it from the water. It collected its wits and darted away. That’s one beauty of wade-fishing: gentle releases that minimize harm to fish.

Four more rockfish struck the jig over the next half-hour, as the light faded from orange and pink to deepening shades of gray. One was a powerful, football-fat twenty-two incher that would have baked up beautifully, but supper that evening was already accounted for, so it swam away with the others.

Making an effort like this isn't just for anglers. Going out intentionally in weather that's less than comfortable applies as well to watching winter waterfowl like tundra swans, following otter tracks on a beach, or just walking a deer trail in the woods. You'll never know what you'll find if you don't go.