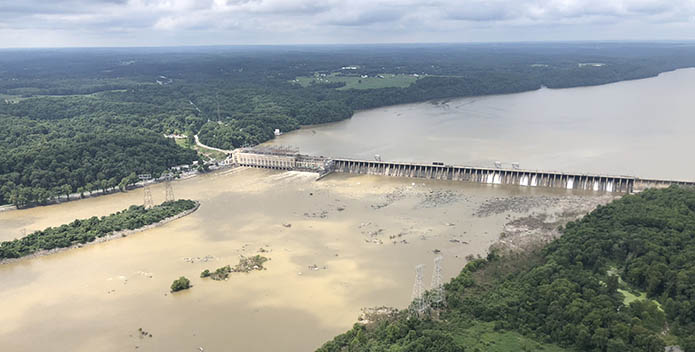 Flow from the Conowingo Dam is back to normal four days after Exelon had to open 20 gates due to extremely high water levels resulting from a week of torrential rain.

There is no doubt that the Bay was an ugly sight last week. It was a stark reminder of the damage that is caused by heavy rains. But while the trash, debris, and sediment were visible, there are two things that are not yet known: How much nitrogen and phosphorus pollution washed into the Bay over the Conowingo Dam, and what the long-term affect will be on the Chesapeake Bay.

The Blueprint is unlike past state/federal voluntary agreements. It includes pollution limits, state-specific plans to achieve those limits, two-year milestones to evaluate progress, and consequences for failure. In it, the states also committed to implementation of 60 percent of the practices necessary for Bay restoration by 2017 and finishing the job by 2025.

And, it is working. Pollution has been reduced, bay grasses are at record levels, and oysters are rebounding. But the recovery is fragile.

There is no question that the Susquehanna River contributed a significant portion of the pollution entering the Bay as a result of the recent storms. And no question that Pennsylvania has fallen short of its pollution-reduction goals.

The Chesapeake Bay Program Executive Council (EC) is charged with leading Bay restoration efforts. Chaired by Governor Hogan and comprised of the Bay State Governors, the Mayor of Washington D.C., the Acting Administrator of the Environmental Protection Agency, and the Chair of the Chesapeake Bay Commission, they will meet tomorrow and there are three things they should be working on.

First, the EC must strongly advocate for the Conservation Title in the Senate's version of the federal Farm Bill. Both the House and Senate have each passed different versions, but the Senate legislation provides a greater commitment to conservation practices for the region. These practices help farmers reduce polluted runoff.

Specifically, policies proposed by Senator Bob Casey (D-PA) will provide greater assistance to farmers to plant forest buffers along waterways. This is one of the most cost-effective practices to reduce pollution from agriculture. In addition, provisions championed by Senator Chris Van Hollen (D-MD) makes changes to the Regional Conservation Partnership Program, providing additional funding and technical assistance for farmers to install conservation practices.

The bottom line, the more conservation practices, the less pollution.

Second, CBF supports Governor Hogan's efforts to have Exelon help pay for reducing pollution from the Conowingo Dam. The Governor should publicly commit to using a substantial portion of that funding to reduce pollution from Pennsylvania's farms. While major storm events are the most visible indications of the problem, science tells us that upstream sources, not storms, account for the majority of pollution that passes through the dam.

And, it is much more cost effective to reduce pollution at the source than to try and remove it after it is already in the water.

Finally, while the EC can't control what the Pennsylvania General Assembly does, it should make it clear that the lack of funding to reduce pollution is unacceptable. The Commonwealth's Constitution requires Pennsylvania to protect its rivers and streams from pollution. And by signing the latest Chesapeake Bay Agreement in 2014, Pennsylvania reaffirmed its commitment to reducing pollution. However, for the last six years the Commonwealth has fallen short of the pollution-reduction goals it set for agriculture and urban/suburban polluted runoff. If the General Assembly again fails to act, EPA should hold Pennsylvania accountable.

In the more than 30 years since establishing offices in Pennsylvania, CBF has demonstrated a deep respect for the farming community, helping thousands of family farmers implement pollution-reduction practices. Together with its partners, CBF has leveraged well over $25 million in private, state, and federal funding to clean up the Commonwealth's rivers and streams. CBF continues to work to establish Pennsylvania's Phase III Watershed Implementation Plan. We are also coordinating the Keystone 10 Million Trees Partnership, with a goal of helping the Commonwealth meet its forest buffer goals.

More than 19,000 miles of Pennsylvania's rivers and streams have been damaged by pollution. An economic report commissioned by CBF found that investments in implementing the Blueprint will have a significant benefit for Pennsylvania's economy. Once the Blueprint is fully implemented, and the benefits fully realized, the value of the natural services provided would increase by $6.2 billion annually, from $32.6 to $38.8 billion.

While Pennsylvania is furthest from reaching its goal, Maryland and Virginia have more work to do as well. Maryland fell short of its nitrogen goal and while Virginia met its overall goal for nitrogen and phosphorus, it fell short for sediment. Progress in both Maryland and Virginia was largely driven by improvements in sewage treatment plants, masking shortfalls in agriculture and urban/suburban runoff.

As we saw in the recent storms, a pulse of pollution rolls downstream, harming the Bay and its crabs, oyster, and fish. While all the Bay jurisdictions need to do more, without Pennsylvania stepping up we will never achieve the legacy of clean water that our children and future generations deserve.