Show Me the Science: Virginia’s Refreshing Take on a Water Quality Quandary 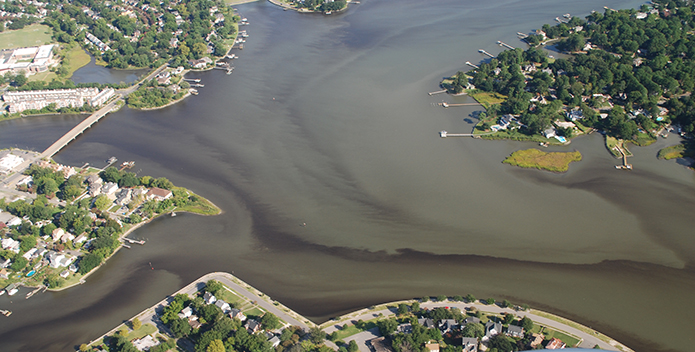 Working together, researchers and policymakers created a win for the James River—and everyone else.

In these days of divided national politics, it can feel difficult to find a good-governance story. Not to mention one that ends with legitimate benefits for both the environment and industry interests.

The James is one of Virginia's most iconic waterways. Coursing more than 340 miles from the Appalachian Mountains to the tidal wetlands of Hampton Roads, it is the Commonwealth's largest river and the third largest tributary to the Chesapeake Bay. And, like many of the nation's iconic waterways, it suffers from an overabundance of nutrients released by factories, farms, wastewater treatment plants, and urban development resulting in excessive algal blooms that pose risks to human and environmental health.

In 2005, the Commonwealth first issued specific water quality standards aimed at solving the algae problem based on measures of chlorophyll a, a green pigment the algae produce. Last month, it approved a highly anticipated update to those standards. State environmental managers are calling it a "landmark action," and CBF scientists say the process could be a model for cleaning up algae-afflicted waterways in the Bay watershed and across the country.

The updated standards are notable for both the scientific firepower brought to bear on their development and the broad buy-in they garnered. They represent a valuable example of policymakers putting real support behind scientific study and—here's the critical part—following through on what the science actually found. The result is a meticulously tailored regulation that not only reflects the James River's unique challenges in the complex Chesapeake system, but also has achieved support from the industries and communities it governs.

It began with the recognition that the James is in serious trouble from algal blooms. The recurring blooms produce toxins that can harm wildlife like fish and crabs and, in large enough quantities, threaten the health of recreational swimmers and pets. After officially declaring the river "impaired" under the Clean Water Act in 1999, Virginia faced a tricky question. How much algae could be in the river without causing these negative effects, and how much did it need to reduce nutrient pollution to reach that level?

The 2005 chlorophyll a standard provided a good path forward based on the available science at the time, and it set off a round of upgrades at wastewater treatment plants to reduce pollution. But when the U.S. Environmental Protection Agency (EPA) established the watershed-wide "pollution diet" for the Chesapeake Bay in 2010, it called for even steeper pollution cuts in the James River. 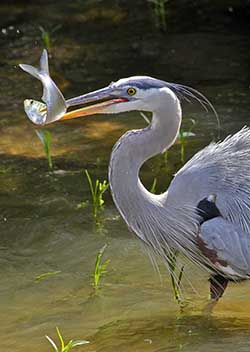 A great blue heron catches fish for breakfast at a rookery on the James River in downtown Richmond, Virginia.

Wastewater plant operators balked at the price tag, which would have added an estimated $1-2 billion to pollution cleanup costs. Meanwhile, researchers realized that focusing solely on water quality problems in the mainstem of the Bay—which largely revolve around the chronic, low-oxygen dead zone—might not solve the algae problems in the James.

"We tend to see the dead zone, and nutrients, as a single issue," says Joe Wood, senior scientist for CBF's Virginia office. "But it's multi-pronged."

The effect of oxygen levels on fish and wildlife is relatively straightforward. Too little oxygen, and you get a dead zone where animals can't survive. The effect of algae, however, is complex, and every river is unique. Different species of algae bloom in different parts of the river, depending on factors like salinity, water temperature, and sunlight. Different algae produce different problems, and different species of wildlife are more or less vulnerable.

To figure out how much algae—and therefore, nutrient pollution—can exist without harming the James, Virginia needed to know a lot more about how blooms behaved and affected wildlife under the river's unique conditions. 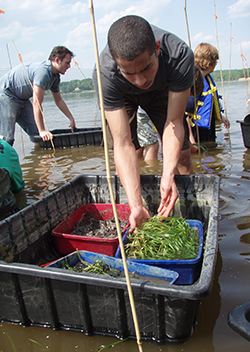 In 2011, the Virginia General Assembly approved $3 million to finance a comprehensive study led by scientists at the Commonwealth's research universities. Over seven years, researchers identified harmful algae species in the river, monitored the toxins they produce, and determined at what levels algal blooms hurt aquatic life. They also ramped up water quality monitoring efforts, resulting in millions of data points.

The results of the study formed the basis of new recommended standards backed up by highly-localized data. In the end, the science provided resource managers with critical information on how to revise the level of the chlorophyll a standards, how frequently they can be exceeded, and their relationship to nutrient pollution levels.

The Virginia State Water Control Board, the entity that sets environmental regulations for the Commonwealths' waterways, adopted the new standards in June. They will be implemented pending final approval from the EPA.

The way things shook out, the new standards don't look to be as difficult to achieve as expected back in 2005.  That's what happens sometimes when you follow the science, says Wood. But the process was monumental in improving understanding about the impacts of algae. It helped create public trust in the validity of the water quality standards, which is critical for rallying support for the investments needed to meet them.

"The data brought stakeholders together, because it answered questions about the harm caused by algal blooms and what level of effort was needed to improve the resource; a goal which all parties want to ultimately achieve," says Wood, who worked effectively with other scientists throughout the process, serving on an advisory panel with a goal of ensuring that the revised chlorophyll a standards strongly protect water quality. "That's the great thing about data, it can educate us all on the best path forward."

The river is still impaired and more pollution reductions are necessary, but these new standards utilize the best science to ensure continued restoration efforts are as cost-effective as possible.  At a time when environmental protections face widespread challenges, it's an important and refreshing reminder of the good that comes when policy follows science.

Learn more about CBF's efforts to ensure science-based policies to protect the Bay, and how you can help, by visiting our Action Center. Your voice is critical in our clean water efforts. Just this last spring, more than 60 of you joined us in sending messages to Virginia's Department of Environmental Quality urging the adoption of these important James River chlorophyll standards. Your action, no matter how big or small, has impact. Join our Action Network to stand up for our Bay, rivers, and streams.