Caring Veteran Shares Healing Power of Water with Those Who Serve 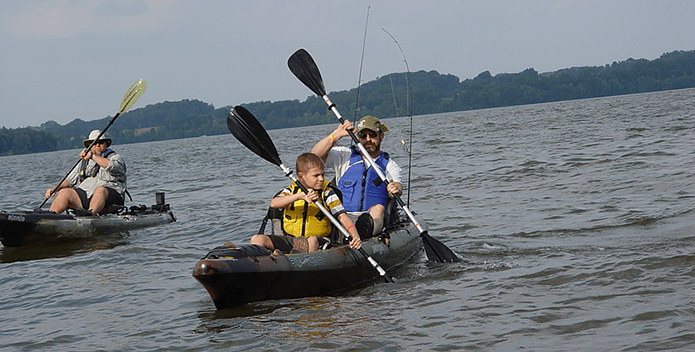 U.S. Marine Corps veteran Daniel Graff and his son, DJ, paddle the Susquehanna River, under the watchful eye of Joe Pegnetter of "Heroes on the Water" at Shank's Mare Outfitters in Wrightsville, Pennsylvania.

This article originally was published in the Gettysburg Times.

Adam Gagne relishes the chance to share his passion for kayak fishing and the healing power of water with those who need them – veterans.

We first met the gentle and generous bear of a man when the group Heroes on the Water (HOW) spearheaded the Chesapeake Bay Foundation’s (CBF) inaugural Veterans on the Susquehanna event in York County four years ago.

It’s fitting that Adam, himself a veteran and hero on the water, is the volunteer coordinator of the only HOW chapter in Pennsylvania.

HOW provides kayaks, fishing equipment, and snacks for veterans and first responder outings at no charge. It brings all branches of the military together for fishing and time away from everyday stresses. It’s a serving of camaraderie that veterans don’t get sitting at home on the couch.

“When you are on the water with someone, you get to meet the real person,” Gagne says.

“We have some folks who show up and have PTSD (Post-traumatic Stress Disorder) and just want to talk,” the Harrisburg man adds. “The veteran doesn’t want to bring a fishing pole with him. He just wants to go out for a little bit. It’s a very relaxing experience and the serenity of it is therapy.”

Air Force veteran David Young of Lansdale attended a previous Veterans on the Susquehanna event and appreciates the restorative power of being on the water. “When we had the chance to go on the river, it was nice and therapeutic,” Young says, “because you had the peace on the water, being able to fish, hang out with one another, let the world go by and have an opportunity to forget about everything.”

Most of Adam Gagne’s life has been on or under water. He is a retired Navy Senior Chief and was executive chef for the Navy at the Pentagon. For more than eight years he cooked while stationed on submarines.

On the surface and like many fellow veterans, Gagne too finds fishing to be peaceful and relaxing. He does most of it on the Susquehanna River and knows that the quality of our rivers and streams is reflected in the fish he catches. “It’s all connected,” he says.

“You never see the same thing,” Gagne says of his time spent kayak fishing. “One day you can be floating next to a kingfisher, or a gray heron, and the next day have eagles 20 feet above your head. Or get towed up the river by a catfish you are catching.”

Adam is also connected to CBF and efforts to reduce water pollution as a civil engineering technician with the U.S. Department of Agriculture’s Natural Resources Conservation Service. He designs and works on restoration projects.

Along with Gagne and his squad of volunteers, CBF appreciates the opportunity to present an event so that those who serve our country can experience the healing and recreational powers of fishing and clean water.

Veterans and those who would like to honor them are invited to join us and Heroes on the Water, when the Veterans on the Susquehanna event returns to Shank’s Mare Outfitters in Wrightsville for its fifth annual event, on Saturday, Aug. 24 at 1 p.m.

It’s free and will be a fun day of kayaking and fly-fishing. A dinner reception with live music, with a $5 entrance fee, will follow at 5:30 p.m. Register at cbf.org/veterans.