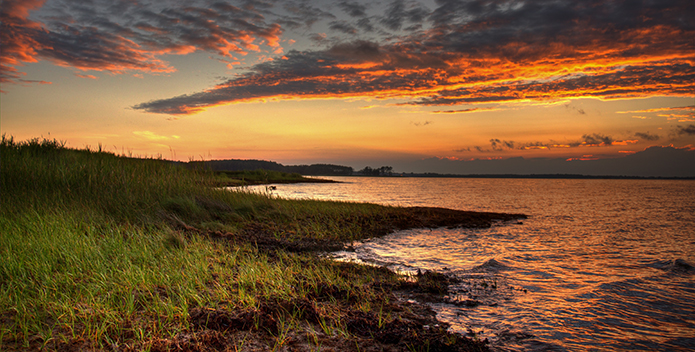 Sunset from Kent Narrows looking over the Chester River.

This op-ed was originally published in Bay Journal.

The historic federal-state partnership working to clean up the Bay’s pollution is entering the final phase of restoration. By 2025, the six Bay states and the District of Columbia must have all of the pieces in place to meet science-based pollution reduction targets. If they succeed, we will all have clean water.

The restoration effort is unprecedented in scale and scope. Fully realizing its goals will result in the largest environmental success story in history. A saved Chesapeake Bay will provide an estimated $130 billion annually in natural resource benefits to the Bay region, home to more than 18 million people and our nation’s capital. It will also provide a model for environmental restoration across the country and around the world.

Success demands two things: Each of the Bay states and the District of Columbia must do their part to reduce pollution. If they don’t, the EPA must step in.

The agency has a critical opportunity over the next few months to hold up its end of the deal. It is currently reviewing the final plans drafted by the Bay jurisdictions to meet their 2025 restoration goals. It is imperative for these plans to be sufficient to get the job done.

Pennsylvania’s draft plan contains many notable improvements over previous ones. But it falls short. It achieves only 67 percent of the pollution reduction needed, and will require significantly more investment than the commonwealth has provided to date.

In fact, by consistently underfunding clean water efforts since the federal-state partnership was launched in 2009, Pennsylvania’s legislators have failed to uphold their promise to sufficiently reduce pollution to its surface water and groundwater.

The consequences are wide-reaching. Clean and abundant water is critical to Pennsylvania’s economy, the health of its citizens, its outdoor heritage and quality of life. But according to the commonwealth’s latest assessment of its waterways, approximately 40 percent of its rivers and streams violate water quality standards.

Fortunately, there are many boots on the ground working hard to reduce pollution in Pennsylvania. State and local agency leaders, farmers, sportsmen and women, conservation leaders and local communities want to do more to protect Pennsylvania’s streams and rivers. We must support them.

But Pennsylvania’s success will be rooted in investing in the more than 33,000 farms and 1,000 local governments. Continued failure means failure for the entire regional partnership. So, unless Pennsylvania’s legislature acts now and substantially invests in these efforts, the EPA must impose penalties.

The EPA has the authority to increase regulations; review state-issued permits to make sure they adequately address polluted runoff from cities; and withhold or place conditions on grant funding. It is hard to overstate the importance of the EPA’s enforcement role. Pennsylvania’s elected officials should do all they can to avoid this outcome.

For decades, efforts to restore the Bay came up short. But in the last decade, progress has been made and science says the Bay is improving. Science also makes it clear that the recovery is fragile.

The Chesapeake is not alone. The same challenges plague waters across the country. From the Gulf of Mexico to the Great Lakes, algal blooms and dead zones caused by pollution have persisted and intensified.

In 2010, we did something different in the Chesapeake. The EPA set science-based targets to reduce pollution from all of the sources that contribute to the Bay’s unhealthy water. All of the Bay jurisdictions committed to have practices in place to meet those targets by 2025. And the EPA agreed to hold them accountable. A blueprint to clean up the Bay was set in place.

It is working. Bay grasses are recovering, blue crab populations are rebounding, and despite its increased size this year, over time the dead zone has been shrinking. Communities throughout the Bay region are benefiting from cleaner streams, greener urban landscapes and more resilience to extreme weather — all of which improve local economies.

That’s not to say the road to finishing the job is easy. The challenges are substantial and varied. We must confront climate change. We must fight regulatory rollbacks that jeopardize clean water and air. We must clean up legacy pollution from the Conowingo Dam.

But we know what we need to do. The science is clear. There is a plan. What is needed is the political will and leadership to implement it.

The entire federal-state partnership wants Pennsylvania to succeed. We need the state to succeed. Today, Pennsylvania has the opportunity to be the Bay’s hero. With a science-based plan — and resources to implement it — Pennsylvania will help the region make history.