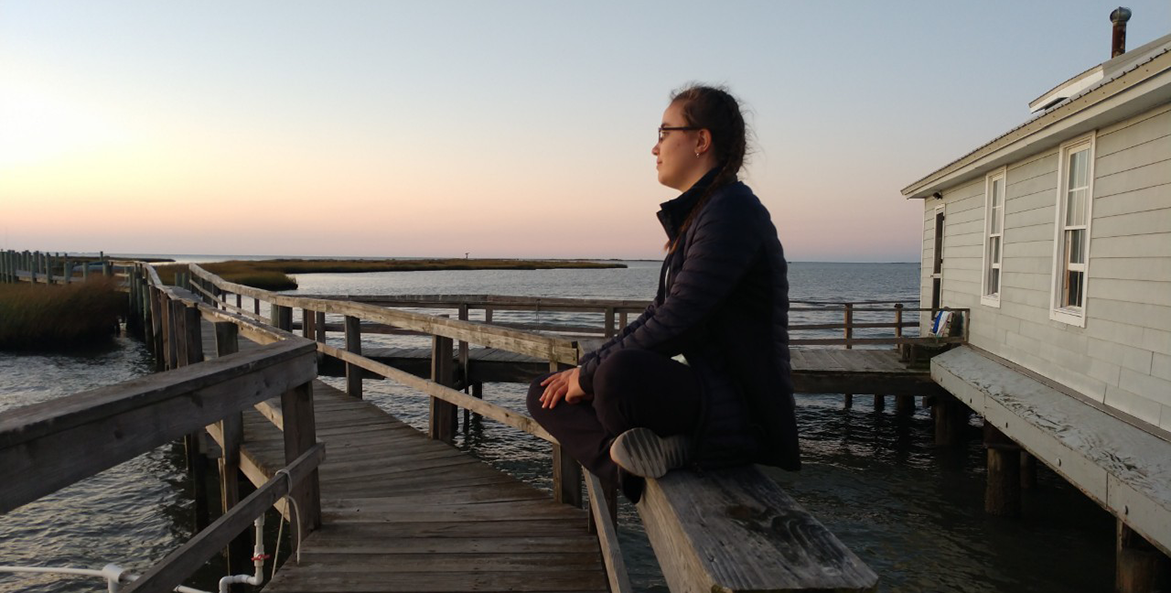 Lenka Platt, senior at Halifax Area High School and President of CBF’s Student Leadership Council in Pennsylvania, sits on the boardwalk railing as she watches the sun set on Fox Island, Virginia.

This fall, I had the great fortune of going to Fox Island, a disappearing island on the Chesapeake Bay. My teacher and I took students from our Student Environmental Action Club on a trip to this Chesapeake Bay Foundation island education center. I had been to all of the CBF island centers except Fox, but Fox was the island I dreamed about.

Last summer, I heard sorrowing news. Fox Island would be shutting its doors because of rising sea levels due to climate change. I was heartbroken to then believe that I wouldn’t get my dream of going to Fox. When I found out that I would get to go, it was some of the best news I have ever heard.

Off the grid and in the middle of the Bay, the island is accessible only by boat and we had to bring our own food and drinking water. A few solar panels power a fridge and some lights. There is a gas stove and a shallow well for other water needs. Three educators from CBF, along with us, would be the only other people we would see for three days.

Before getting to Crisfield, Md., where we would board the boat to Fox, we knew that we would be one of the last groups to go to Fox. We started to feel the emotion of losing Fox without even being there. Ironically, we saw three young foxes scampering near the Chesapeake Bay Environmental Center on the way down, beginning the magic.

A harvest moon had brought the tides up and flooded the town as we drove into Crisfield. Our bus plowed through water to get to the marina.

My teacher pulled me aside before we got on the boat. She told me that our trip was likely to be the last trip to ever go to Fox. It would end with us.

As we approached it, I realized, “This isn’t an island.” It was so beautiful, but yet so heartbreaking to see what Fox had become. The CBF materials about Fox features a picture of the island that was taken in 2007. Fox no longer looks anything like that picture.

In the house on the island, there were quotes on the wall that devastated me. One was a chart of the Bay’s history. The last column said, “2021, You Decide.” It is 2019. We have decided. Fox is closing down and there is almost no longer an island.

What we needed was magic, and through those three days, we found it. The trip was amazing. We found so much life and beauty. Our group shared ideas. We watched the sunset, moonrise, and sunrise together, in awe of the majesty.

It was magic how the island brought us together, the mindset it had us in, and its pure beauty. This magic gave us hope. The magic empowered us to plan to make our own decision.

It is our responsibility to make a difference so the rest of the islands don’t have to close. The magic re-energized us; it showed us that the fate of our world is on our shoulders. It re-established our drive to take action to help our community and watershed.

We realized that we have the power to educate our communities, contact our representatives, and to take actions, big and small, to save our home, watershed, and world.

Now, we have the magic to spread. Sometimes, all it takes to believe you can make a difference is some Fox Island magic.