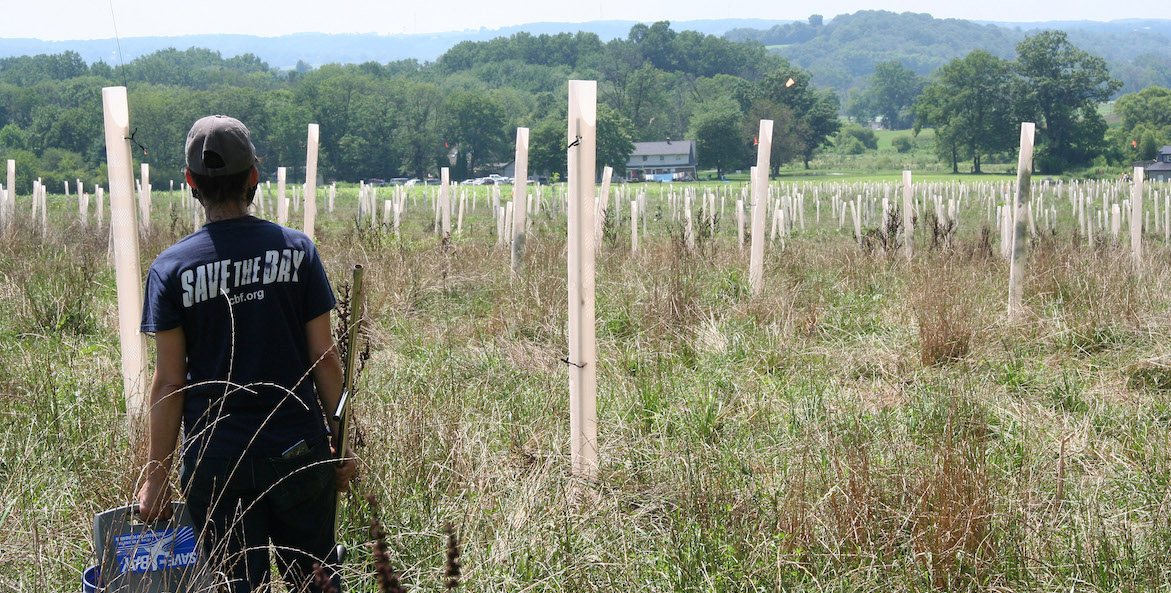 Forested streamside buffers are one of the most cost-effective ways to trap nutrients and soil on the land, preventing them from polluting waterways.

A National Fish and Wildlife Foundation (NFWF) grant to CBF, and matching funds, will provide nearly $2 million to plant and maintain 360 acres of new trees in eight Pennsylvania counties, boosting their local plans for cleaner water.

Forested streamside buffers are one of the most cost-effective ways to trap nutrients and soil on the land, preventing them from polluting waterways. Pennsylvania’s Phase III Watershed Implementation Plan (WIP), which outlines how the Commonwealth will achieve the pollution reductions it committed to in the Chesapeake Clean Water Blueprint, sets a goal of planting nearly 86,000 acres of streamside buffers by 2025.

“We crunched the numbers and realized you would need many technicians on the ground to meet that goal,” said Molly Cheatum, CBF’s Restoration Program Manager in Pennsylvania and grant administrator. “Between state agencies and non-profit organizations only 25-30 technicians currently implement buffers. This grant presents an opportunity to build a collaborative workforce involving the private sector.”

The grant will be used to engage, train, and certify 15-20 private sector landscape professionals in buffer installation and maintenance, doubling and potentially tripling the workforce on the ground.

The nearly $2 million in investments as result of the NFWF grant will also provide nine trained technicians to assist priority counties in outreach and education to 2,400 landowners within Adams, Bedford, Centre, Cumberland, Franklin, Lancaster, Lebanon, and York counties. The grant is designed to boost countywide action plans toward their buffer goals.

Chesapeake Bay Landscape Professionals will create a certification program and a one-day workshop on buffer maintenance for 17-20 contractors. CBF will contract with those who go through the training. Eventually, the one-day buffer program could be offered statewide and in Maryland and Virginia.

Focused efforts through county conservation districts to add buffers in the priority counties will produce the most return on pollution-reduction dollars and accelerate the Commonwealth toward achieving the statewide WIP goal for buffers.

“CBF thanks the National Fish and Wildlife Federation for this investment in the important work of adding streamside buffers to reduce pollution entering our local waters,” said Shannon Gority, CBF Executive Director in Pennsylvania.

“It will take planting trees in the right places and with the right partners to reach buffer goals in clean water plans set by key counties,” she added. “With this investment by NFWF and so many dedicated partners who share a commitment to clean water, counties will be better prepared to take action to protect and restore local waters. That benefits all Pennsylvanians and everyone else downstream to the Bay.”

Investments by the Keystone 10 Million Trees Partnership will be in the form of technical assistance, trees, supplies, and forward contracting of maintenance activities on the 360 acres.

“The benefits and values of trees and forests are more critical than ever as our commonwealth faces increasing financial, social and environmental challenges,” said DCNR Secretary Cindy Adams Dunn. “This project embodies one of DCNR’s core principles of partnerships, putting into practice the need to work together to solve complex problems. We are delighted for this increased funding and proud to work with this group of committed partners.”

This grant project will also test a new buffer incentive program with simulated property tax relief for each acre of buffer installed. Participating farmers will be surveyed to determine if permanent property tax relief is a meaningful incentive for them to convert crop/pastureland to streamside forested buffers.

The NFWF grant to CBF is among 56 restoration and water quality improvement grants made through the Chesapeake Bay Stewardship Fund for 2020, totaling $18 million for projects in the Bay region. An anticipated matching amount of about $19 million would lead to a total on-the-ground impact of over $37 million.

CBF is also a partner on a NFWF grant to the Chesapeake Conservancy that will result in full-farm restoration on 25-30 farms in Pennsylvania. The project has the potential to serve as a national model for coordinating on-the-ground implementation with high-resolution mapping to improve the health of streams so that they can be removed from Pennsylvania’s impaired streams list.

“Partnerships are the key to ensuring that we leave a better legacy for water quality, wildlife habitat, recreation, and our way of life for future generations,” said Chesapeake Conservancy President and CEO Joel Dunn. “We look forward to working with the Chesapeake Bay Foundation and the members of the Precision Conservation Partnership and thank NFWF for the funding to make our work possible. Together we can do hard things.”

The Keystone 10 Million Trees Partnership is a collaborative effort of 145 groups from national, regional, state, and local agencies, conservation organizations, watershed groups, conservancies, outdoors enthusiasts, businesses, and individuals. Its ambitious goal is to plant 10 million trees in the Commonwealth by the end of 2025.