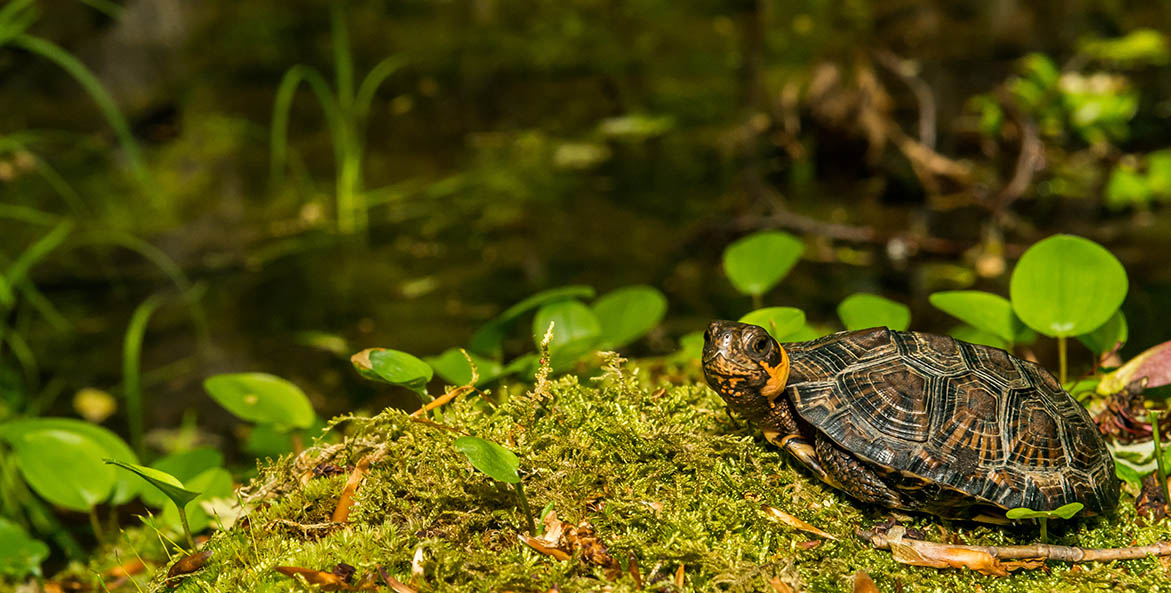 The reclusive bog turtle (Glyptemys muhlenbergii) is the smallest turtle species in North America, reaching an average adult weight of less than four ounces. Native to the eastern United States, "Boggies" prefer to live in isolated wetlands with healthy amounts of moss and mud.

He and his son had fished the clear water of the nearby creek for 30 years, so he and his wife knew the historic farm would make the perfect home and a place to raise livestock. What the prospective buyers did not know at first, was that the beautiful wetland tickled by pristine water was home to threatened and endangered bog turtles.

"I'm proud to have them here and proud to take care of what is really their land," the landowner says while standing in wetland mud and cattails. "It's an honor and a privilege and frankly it's a lot of fun. They are cute little things."

"Boggies" were listed as threatened federally by the U.S. Fish and Wildlife Services in 1997 and as endangered in Pennsylvania and all states where they exist, because of dwindling populations and a myriad of threats. Their presence is a closely guarded secret.

Bog turtles get no bigger than four inches long and carry a distinguishing orange blotch against dark skin behind their eyes. They reach reproductive maturity at five years and are known to live at least 60 years. Females may lay up to three elliptical-shaped eggs one-and-a-half to two-inches long.

As omnivores, boggies are opportunistic feeders. Seeds and plant matter make a good portion of their diet, and they have even been seen eating carrion in the wetland.

They overwinter from November to early April in fens, peat-forming wetlands that rely on spring or groundwater at 45 to 55 degrees. Fens take thousands of years to develop and cannot easily be restored once destroyed.

When they hibernate, the turtles are in a suspended state of cool and can breathe a little under the water, but they don't need much oxygen. They will come up occasionally on a warm day to take a breath.

They emerge in early April to forage and mate. Females do not breed every year. Those that do lay as many as three eggs in mid-June. Young hatch mid-July to late August, depending on air temperature. Boggies are basically homebodies, so babies hang around the nest until brisk fall air sends them under the mud.

Poaching for the black market is a significant concern for the turtles worth more than their weight in gold. Many are killed crossing roads, and predators like foxes, raccoons, and other mammals steal eggs.

Development has taken a lot of critical wetland habitat. Succession, which is the advance of woody growth, shades areas turtles need to lay their eggs and also hurts their habitat.

Then, there is the threat of degraded water quality by pollution that flows in.

Like the Eastern hellbender and brook trout, boggies are an indicator species of stream and wetland health.

"These guys live in headwater streams mostly. If you have bog turtles, the water quality is really good and the system is healthy," says Chris Urban, Threatened and Endangered Species Coordinator for the Pennsylvania Fish and Boat Commission (PFBC).

"Wetlands are important buffering systems for freshwater," Urban adds. "They host a plethora of invertebrates and fish and salamanders that these systems need to thrive. Because of the regulatory system of being federally listed as threatened and state endangered, boggies actually help provide protection for that type of system."

There are 200 known occurrences in Pennsylvania, more than most of the other states.

Urban finds boggies to be charismatic creatures because of the perception by landowners that having them will change what they can do on their property.

"We're only here for a period of time," the proud property owner says, "and we are going to do everything that we can to make that they have a place to reproduce and be maintained."

Bog turtle populations are dwindling due to a myriad of threats.