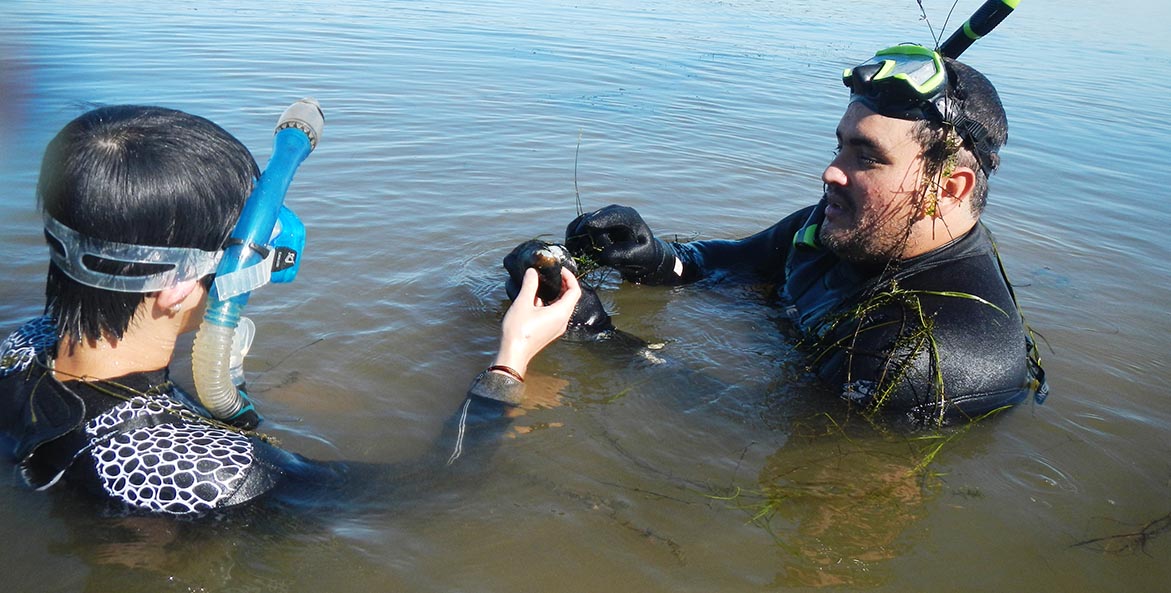 Jorge Bogantes Montero, natural resources specialist at the Anacostia Watershed Society in Washington, D.C., and Selina Cheng, a member of the Chesapeake Conservation Corps, examine freshwater mussels in the Potomac River in 2021.

Habitat and clean water are the backbone of efforts to stem biodiversity loss in the Chesapeake’s rivers and streams. An important reminder as this month’s United Nations COP 15 Biodiversity Conference adjourns.

In late August, restoration experts placed 1,300 hatchery-raised James spinymussels into the mainstem of the James River in Virginia. It was a celebratory moment, marking the first time in more than half a century that the endangered mussels had returned to their home waters.

While momentum is growing behind restoration efforts like these, freshwater mussels and other species that live in the Chesapeake’s rivers and streams still face tremendous peril—and possibly extinction. Globally, species are disappearing at a much faster rate from freshwater ecosystems than from the oceans and on land. This is a huge concern. While freshwater habitats cover only 1 percent of Earth’s area, they are home to approximately 10 percent of its biodiversity. Preserving these species was a key issue at the United Nations COP 15 Biodiversity Conference, which ended today in Montreal, where global leaders approved a new framework to protect and restore biodiversity over the next 10 years.

Here in the Chesapeake Bay region, these global trends are playing out across the thousands of miles of freshwater rivers and streams that flow into the Bay. An astounding variety of turtles, frogs, fish, crayfish, aquatic insects, and other species call these waters home, but many are under threat from pollution, habitat loss, warming water temperatures, and other pressures. The Eastern hellbender, the largest salamander in North America, has disappeared from much of its historic range due to the degradation of the cold, clean streams it relies on. Brook trout, the only trout native to the Chesapeake watershed, have also been lost from many streams.  And then there are freshwater mussels. Roughly 25 species are found in the watershed, but their populations have likely fallen by 90 percent since European colonists arrived in the 1600s. 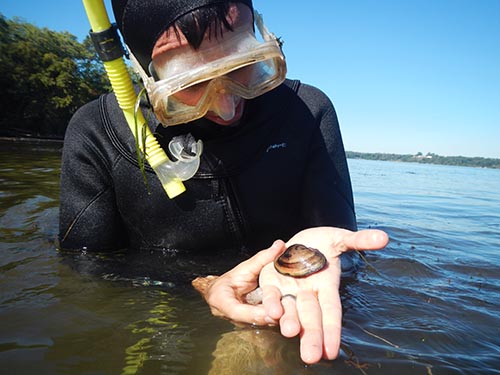 Each of these species represents a critical piece in the watershed. Freshwater mussels, for example, can filter up to 15 gallons of water each day, removing algae, sediment, and bacteria—where mussel populations are large enough, the amount of water filtered by mussels can actually exceed the daily amount of water flowing in a stream. The spaces between mussel shells form habitat for aquatic insects and fish, and they are a food source for other animals, including humans. These benefits to other species make mussels a keystone of healthy freshwater ecosystems, and they once dominated the biomass of rivers and streams in eastern North America. The more species we lose, the more we risk disrupting the functioning of the entire system.

To preserve mussels and other freshwater species, we have to start with improving habitat and water quality. These provide the backbone of restoration efforts, which we can then build on through actions like programs to propagate species in hatcheries. Protecting biodiversity and improving water quality may seem like distinct problems, but when it comes to solutions, planting riparian forest buffers is a way to address both at once.

Riparian forest buffers have long been known as one of the most cost-effective ways to improve water quality by preventing pollution from entering rivers and streams. They filter and slow down water running off the land, keeping nutrients like nitrogen and phosphorus from reaching the water. By the same mechanism, they prevent the erosion of streambanks and the scouring of streambeds, helping to protect the species like mussels that live along the bottom. More recently, researchers have begun mapping the complex interactions between streams and forests and have identified riparian forest buffers as critical biodiversity corridors that could help preserve species as habitats become fragmented by development. These benefits will become even more important due to the intensifying storms and rising water temperatures caused by climate change.

Over the next year, grants from the National Fish and Wildlife Foundation will allow CBF, the James River Association, and our partners to move forward with two new projects designed to identify where riparian forest buffers and other conservation efforts can best protect freshwater mussels in Virginia. Working with watershed modelers, we will use detailed data about the conditions where mussels have been observed in the past to identify the areas most likely to support mussels in the future. Essentially, we’re looking for the golden areas where restoration will be most effective to stop the loss of mussels and help populations return.

The growing enthusiasm for freshwater mussels and initiatives to restore them is a promising sign, but these efforts are just a start. Much more public attention, education, and investment will be needed to ensure continued support for the programs and policies necessary to reduce pollution and restore the habitats on which these amazing mollusks—and many other species—depend.